Manchester City are the champions of the Premier League 2017-18. City started shaping themselves as the strong contenders for the famous Premier League title from the start of the season. Throughout the 2017-18 season, Manchester City’s players, Manager and the staff worked with focused and resolute attitude. The Citizens fought till the final whistle in decisive fixtures.

The Champions implemented the exceptional 'Organization Style of Play'. The goalkeeper Ederson acted as a strong wall in front of goal post. City's defense stood strong against opposition attack. The midfielders were stable and super creative. Kevin De Bruyne became the engine of midfield. Thus, Blue half of Manchester dominated the Premier League 2017-18 season in real sense.

Pep Guardiola took the managerial job at Manchester City on 1st February 2016. The first season of the Spaniard was a tough and quite rocky one.

Manchester City started the first season under Guardiola with high tempo and won first 6 fixtures. The world started believing that, Spanish and German leagues conqueror (Pep Guardiola) is on his way towards winning England. But the reality became a bit different. Lacking in pace and energy became a big worry for the manager. Non fluidic build up play, less depth in attack and absence of resolute attitude urged Guardiola to make some structural changes in the squad.

The 2017 summer transfer window became a huge success for Manchester City. They beat their rivals to sign Mendy, Walker and Bernardo Silva. Guardiola knew that City had obtained the maximum output from the full backs Zabaleta and Clichy. Zabaleta and Clichy were lslow and Guardiola wanted his full backs to step up and participate more in attacks and support the wingers.

In his first season, Pep replaced the fan favorite Joe Hart with his Barcelona man Claudio Bravo. But, somehow Bravo became the central point in City’s defensive problems and Guardiola again found the need replace the goalkeeper. He approached the Brazilian shot stopper, Ederson. Ederson instantly became the first choice goalkeeper with his brilliance in goalkeeping and a unique ability of accurate long range punts.

Earlier, the structure of City’s attack was limited up to the strikers only. In 2017-18 Premier League campaign, Pep gave more emphasis on wingers, Sterling and Sane. Kevin De Bruyne’s role became deeper and became the heart of the midfield. In this way, Guardiola threw the old slow tactics and reshaped Manchester City as the strong and frightening contenders for the title.

#2 Free flowing attack and the wingers can also score 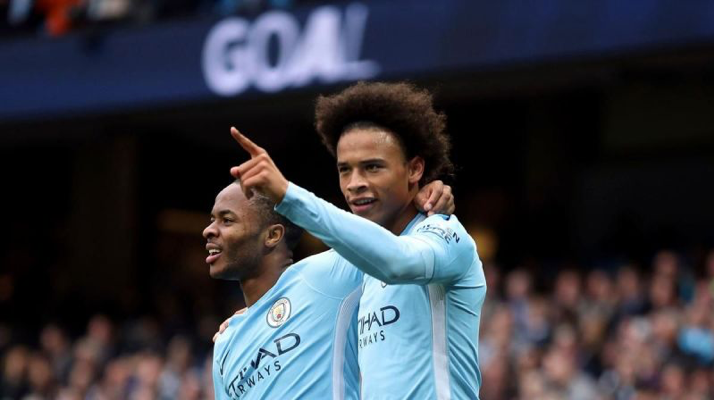 Who said only the strikers can score? Of course they should and they did but Manchester City’s midfielders and wingers contributed to a great extent in City’s goalscoring. City's lethal attack became a dagger to opponent’s heart. City's holding midfielder came close to the forwards along with attacking midfielder many times. Wingers came slight inside and made space for full backs to surge forward and contribute in the attacks. 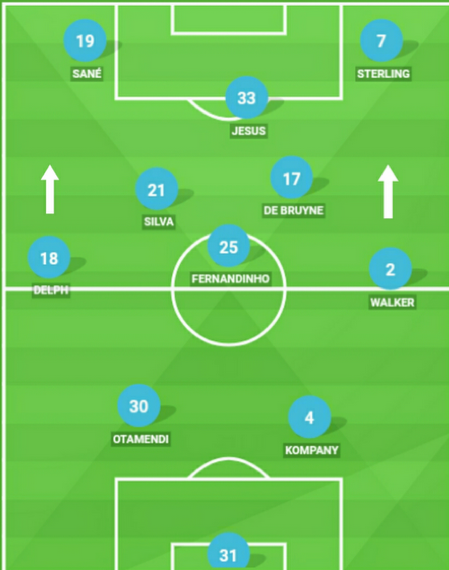 The 'Citizens' have reached the astonishing tally of 106 goals. Sane (left winger) scored 10 and assisted 15. Sterling (right winger) scored 18 times and assisted 11. The midfielders, David Silva, Kevin De Bruyne and Bernardo Silva scored 9, 8 and 6 goals in the Premier League 2017-18 season respectively. Free flowing style and aggressive attacking approach of the wingers is one of the main reasons why Manchester City are champions. 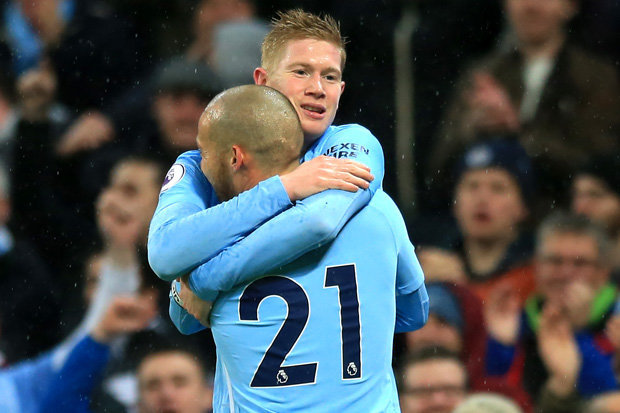 Manchester City’s balance between attack, midfield, and defense helped them achieve remarkable consistency throughout the season. The Sky Blues have scored 2.79 goals per match and also lead the table of ‘passes completed’. The Champions also have most touches of the ball. City broke the record of 13 consecutive wins in a row which was set by Arsenal in 2003-04, and set a new record of 18 straight wins. Citizens lost just two games in their first 35 league fixtures. It exhibits their extra ordinary desire to win.

Certain things are essential for the above consistency –

1.   Continuous involvement of players and the manager

2.   Constant backing of other coaching staff

4.   Encouragement by board members

We have seen all the above traits in Manchester City's performance. 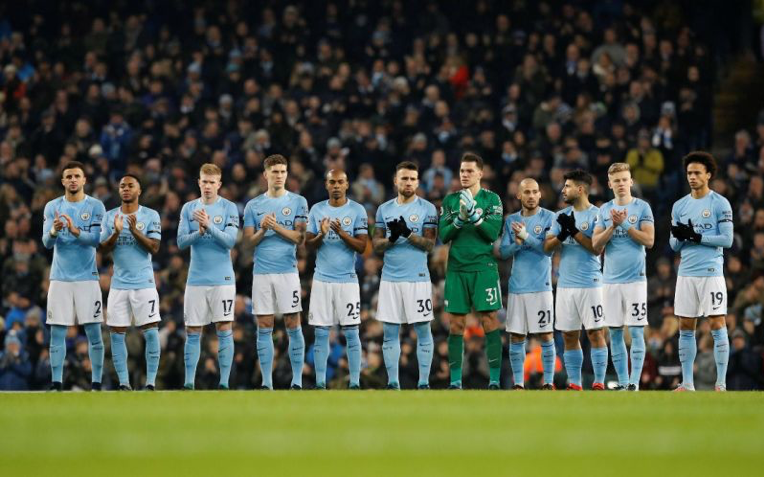 Pep Guardiola recruited a bunch of high quality and top rated players in the 2017 summer transfer window. Danilo, Benjamin Mendy, Ederson, Kyle Walker bolstered the defense. In attack, they brought Bernardo Silva, a skillful attacking midfielder from 2016-17 French champions AS Monaco FC. The Portuguese international played pretty well in competitions other than Premier League and scored three goals and made four assists. Bernardo Silva's contribution in other competitions helped Sterling to concentrate on Premier League. The Sky Blues already had Aguero and Gabriel Jesus to maintain the attacking depth. Manchester City's ever energetic wingers supported this attack. With llkay Gündogan returning from injury, City's midfield became even more stronger. Yes, they did spend huge money, but they got enormous quality in return.

For example, when City's first-choice left back Benjamin Mendy faced long term injury, it didn’t affect them much. Because the Citizens had the right men to replace him. Fabian Delph and Danilo stepped up. Even when Delph suffered with knee problem, youngster Zinchenko took the responsibility on his shoulders. On the other hand, if we look at other title contenders, they suffered massively when the key players faced injury problems. 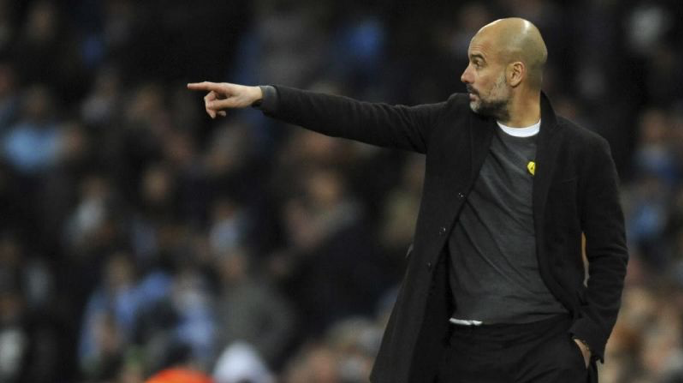 Pep Guardiola can be considered as one of the top managers in modern football. Guardiola is tactically a brilliant manager. His opponent wise approach resulted into many decisive victories. The commanding 5-0 thrashing of Liverpool at Etihad Stadium, crucial away wins against Manchester United and 2 victories against Chelsea proved a real boost in their journey towards the title.

Pep keeps a strict schedule for his players for training every day. He doesn’t like to leave any stone unturned. The Spaniard himself gets engrossed and makes sure that everything is perfect. He pays attention towards every aspect like day to day improvement of his players, involvement of non-coaching staff, training ground condition, etc. Excessive height of grass in extreme weather conditions may affect the play. So, he also ensures that the grass is well cut. Guardiola gets involved in slightest of things and those minute things ultimately makes the difference. His 'Way to Perfection’ approach is the real secret behind Manchester City’s heroics.

Pep Guardiola is well known for his unique off the pitch qualities. He strongly believes that a strong positive environment inside the club increases the chances of getting success.The manager himself spends time with all the players developing a special relationship with them. At Manchester City, he accompanied the players along with the other staff at breakfast and lunch several times. It helped the team to develop off the field chemistry. These small but important things highlight Pep Guardiola’s unique approach towards managing the team in a real sense.