Oakes played for City for 17 years, instantly making him a City legend

While most of us credit the Arab riches for Manchester City’s recent success, in the 60s and 70s, Manchester City was a force to be reckoned with, climbing from the second division to challenge in both England and Europe. The successful era was defined by talented home grown players and solid acquisitions from other clubs. One of the most important player, who orchestrated the City midfield, much like Toure has done all these years, was Alan Oakes.

Alan Oakes joined City in 1958 as an amateur and earned a professional contract just a year later in 1959. His First Division, then the highest level of league in England, debut came against Chelsea under the Les McDowall management. It was a huge moment for Oakes as he was just 16 years old, making his debut in the highest division of English football as a teenager. Oakes went on to play 18 games in that season, as he had now become a player who was consistently in the match day squad.

Oakes was growing into the team as Manchester City were comfortable mid-table finishers in the following seasons. The 1962-63 season was truly the season in which he became an undisputed starter for Manchester City, making the midfield position his own. But it was also the season in which City broke the trend of finishing mid-table, finishing Second from last and dropping down to the Second Division. It was a very dissapointing result, which led to major fan revolt the following season.

The 1962-63 season was a good season for Oakes on a personal front, as he had just added goal scoring to his repertoire. He was now the kind of midfielder, who chipped in with the occasional goals now and then. He scored 4 goals in that season, which took his tally to 5 goals in 4 years of professional football. But the relegation, and the failure to climb back the following season led to a tensed situation between the fans and the club. In January 1965, in a Second Division match against Swindon Town, only 8015 people attended the City game.

This led to major changes as Joe Mercer led Manchester City to the Second Division title in the following season. It came on the back of solid acquisitions of Mike Summerbee and a slightly deeper role given to Alan Oakes. He made 51 appearances for City en route to the Second Division title. In their first season back in the top flight, City signed Colin Bell and secured a solid 15th place finish. In the following season, City, on the back of Mercer’s tactical trickeries and the solidness of the back four and midfield, won the First Division title. It was a historic season, one which united the fans and the club in joy. What made it even special was the fact that they pipped Manchester United to second place, defeating Newcastle United 4-3 on the final day of the season.

Alan Oakes made the second most appearances for City with 49, just one behind defender Tony Book. the composure and time that Oakes seemed to have every time he had the ball on his feet was lauded by critics and oppositions alike. The following season, City started by winning the FA Charity Shield, trashing West Bromwich Albion 6-1. City ended the season by winning the FA Cup, defeating Leicester City 1-0. Oakes was again an ever present in the City squad, playing 52 games, including every match in a successful FA Cup campaign. The win meant City qualified for the European Cup Winner’s Cup. 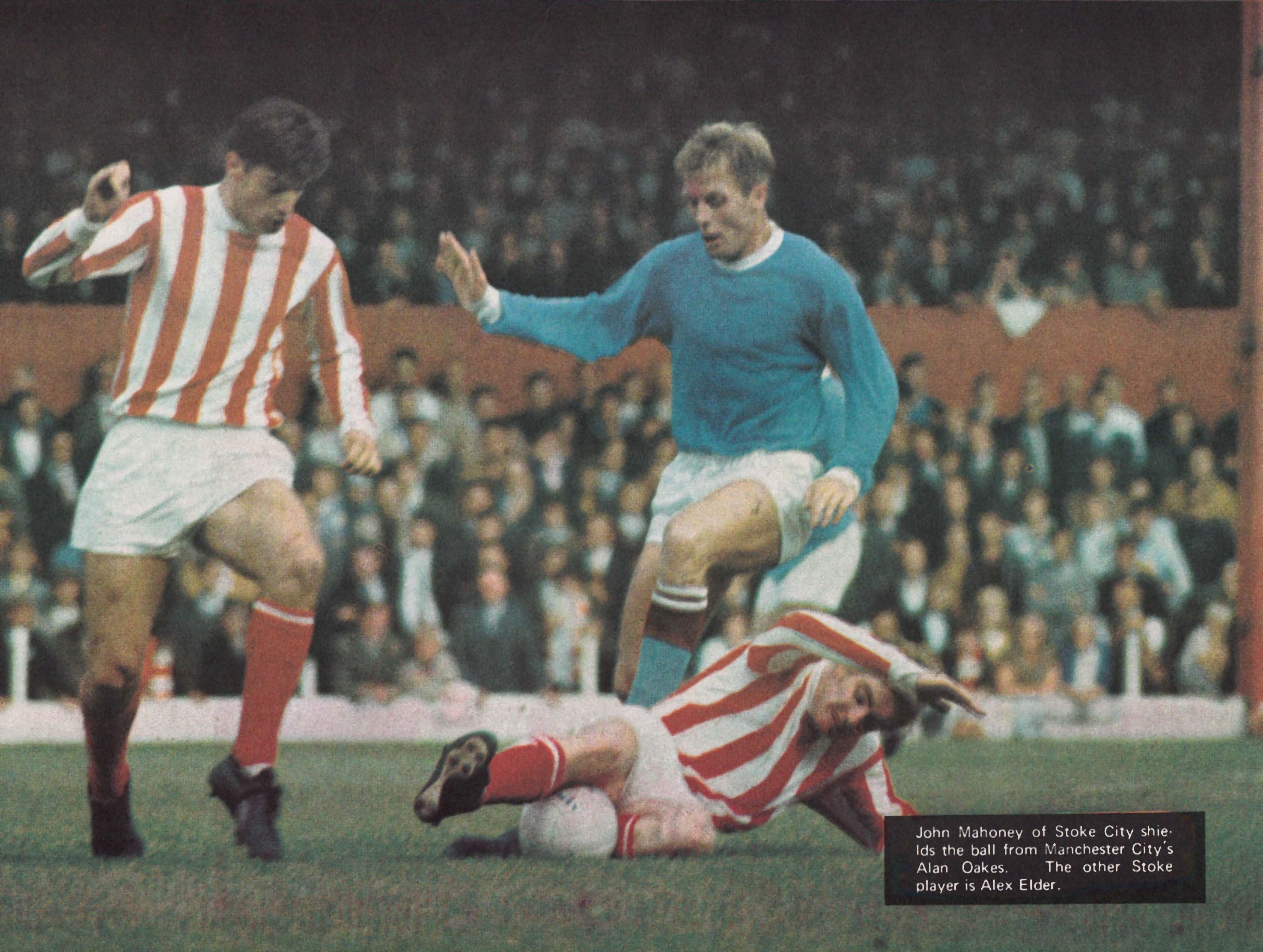 In the 1969-70 season, more up success followed., as City first won the League Cup, defeating West Bromwich Albion 2-1. Oakes played from the start, putting in a solid performance to ensure City’s success. Oakes had a terrific season as he played 59 matches that season, the last of which being the finals of the European Cup Winner’s Cup, defeating Gornik Zabrze in Vienna. Oakes put in another commanding performance in the middle of the park as City won the top honours in Europe’s Cup winners competition.

Alan was rewarded for his performances by playing for the English league team against the Scottish league team in a one off match. He was recognised as one of the 11 best player in the league and one of the best in his position. In the 1971-72 season, City finished 4th, just one point behind champions Derby County. It was a good season for Oakes, but his importance to the team seemed to be dwindling down, as he only made 34 appearances. Oakes started his 14th season with Manchester City by winning the FA Charity Shield, defeating Aston Villa 1-0. But he made just 15 league appearances as City finished 11th under new manager Johnny Hart. The next season was a memorable one for both Oakes and City as they relegated Manchester United, with Denis Law scoring the famous goal.

In 1975, Oakes was finally honoured with the Manchester City’s best Player of the Year accolade as he made over 50 appearances in his last season as a Manchester City player in the 1975-76 campaign. He signed off his City career in style, winning the League Cup to cap off an 18 year stay with the only club he has ever played for. Oakes moved to Chester City in the third division of English football, where he was soon converted into a Player-Manager. He played a record 55 matches in his debut season, leading them to the last 16 of the FA Cup, a first in over 80 years. He won the Debenhams Cup with Chester in 1977 and came so close to securing promotion into the Second Division, with Chester missing out by just two points.

Oakes is also credited with giving Ian Rush his professional debut, and the rest is history. In 1981, the blues were relegated to the Fourth Division as Oakes, still the manager focusing more on being a manager than a player, was seeing the light at the end of his career. He was 39 years old and had been playing for more than 23 years. He ultimately left Chester in March 1982 and would go on to make just two appearances, one for Northwich Victoria and one for Port Vale in the next two years before announcing his retirement.

Oakes hung up his boots at the age of 42, completing 25 years as a professional footballer, playing 928 professional games, 680 of which were played for Manchester City, which made him the record appearance holder for Manchester City, a record yet to be surpassed, and looking very less likely to ever be broken. Oakes was with City through the ups and downs, winning the European Cup Winner’s Cup as well as playing in the Second Division league. He epitomised the typical City’s attitude of grit and composure, which is still seen every time City takes the field. Oakes was and will always be remembered for his tireless services to Manchester City and English football for 25 years.

Oakes celebrating the Debenhams Cup win with the fans