Born in Agrigento, Italy, Alessandro Melli was one of the leading strikers and a club icon at Parma. His father had lined up for Parma AC, playing as a centre forward for the club, and Melli followed his fathers footsteps in joining Parma. He made his first team debut having just turned 17, playing in the 1985-86 season. Parma were playing in the third division of the Italian league, managed by a relatively newcomer, Arrigo Sacchi.

Parma had won the Championship of Serie C1, thus gaining promotion to the Second tier of Italian football. Melli played 6 times that season, scoring his first ever goal for the club, and his only goal of the season. Melli grew into the first team in his second season, but he could not find the goals that the manager and the team was looking for. He ultimately ended up playing just 32 times in two years for the club, leaving on a loan spell to Modena FC for the 1988/89 season.

Melli had received his first International call up in 1988, joining up with the Italian Under 18 side. After spending a year with them, he was fast-tracked to the Under 21 side. Meanwhile, his loan spell was turning into a disaster. Melli had a falling out with the coach of Modena FC, Paolo Ferrari, which lead to him playing just 8 times for the club, with the loan spell being cut short. Melli returned to Parma, and surprisingly, enjoyed a sustained spell of first-team action. He played 17 times for Parma AC in the 1988/89 season, scoring 2 times.

Melli suddenly became the first choice striker, with the coach putting his faith in the youngster. Melli did not disappoint, scoring 11 times in the Second League in 35 appearances. HIs performance helped Parma climb from the Second Division into the Italian to tier football and the best league in Europe at that time. Melli continued his impressive form for the club, scoring a personal best 13 league goals in 29 games. It was an exceptional result, with Melli almost scoring once every two games.

A dip in league form saw his goals tally go down in the 1991/92 season. But, good showing in the cup along with a step up by his teammates Faustino Asprilla, Tomas Brolin and Gianfranco Zola saw Parma win the Italian Cup, or the Coppa Italia. This was Melli’s first trophy at the highest level with Parma. The new season saw a return in form of one of the most trusted striker of Parma, as Melli scored 12 times in 28 league games. Parma had a terrific run in the UEFA Cup Winners Cup tournament, going all the way. Melli scored against Royal Antwerp as Parma won 3-1, with his goal giving Parma the lead after Severeyns drew Antwerp level. Both Parma and Royal Antwerp were first time finalists, with Parma ultimately securing a comfortable victory .

Parma had defeated Atletico Madrid and Sparta Prague en route to the final, with Melli scoring a crucial away goal against Sparta and Boavista. Parma started the 1993/94 season with another continental trophy, as they defeated fellow league rivals A.C Milan 2-1 on aggregate to win the UEFA Super Cup. Melli had won the UEFA Under 21 Euros in 1992 as well as shone in the Summer Olympics of 1992, scoring in two group games. Italy was ultimately ousted by Spain, who went on to win the Olympics Gold Medal eventually. 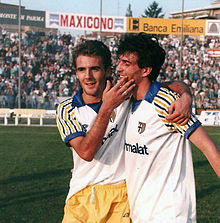 His terrific form and success with Parma and the Junior National team was awarded with an International call up for the World Cup Qualifiers against Malta and Estonia. These two caps turned out to be his only two appearances for his country. Parma, meanwhile, were having a strong few seasons in the Italian top flight, consistently finishing in the Top half of the table. The 1993/94 season was no different, as they finished fifth in the league, with Melli scoring just 5 times in a season hampered by injuries and poor form. The coach had started to lose his faith in Melli, as he looked at other players to solve his problem up top. In the end, Melli was transfer listed and shipped off to Sampdoria Genova.

Melli took some time to adjust to the playing style of Sampdoria, and once he did, he never inspired confidence to his manager and the fans. Thus, after making just 8 appearances and scoring a solitary goal, Melli was swapped for Ruud Gullit with Milan. Milan had lost Marco van Basten to injury and with Marco Simone shouldering the goal scoring responsibility solely, Milan though the swapping of an ageing Gullit with the 26 year old Melli, who was in his peak years, would be a shrewd acquisition. It turned out to be a disastrous switch as Melli could only make 6 League appearances, scoring a solitary goal again. Milan, who had won the League title thrice on the trot, finished a dissapointing fourth.

The signing of Roberto Baggio and George Weah in the summer meant the time was up for Alessandro Melli in Milan. Parma reinvested their faith in their youth product and brought him back to the club after a miserable year since leaving. Back at Parma, Melli was mainly used as a second choice striker behind Gianfranco Zola in his first season, and behind Hernan Crespo in his second season at the club. He managed to make 42 appearances in total in his two year second spell, scoring 4 times, including none in his second season at the club.

Melli rejoined Parma after a miserable year away from the club

At the end of the 1996/97 season, Parma decided to move the 28 year old off the books as he signed for second division side AC Perugia. Melli played 50 times in the league in a three year stint with the Second division side, which included an immediate promotion to the Serie A in his first season at the club. But a meagre return of 3 goals, one each, in the three seasons at the club meant Melli, who was supposed to be in his peak, never took off, with his career winding down sooner than expected.

In the summer of 2000, Melli was moved on to Ancona Calcio, and he played thirteen times for the Serie B club, scoring 4 goals. The 32 year old shockingly decided to hang up his boots at the end of the season, ending a 15 year career. Melli had shown promise and quality at an early age playing as a striker. But, dip in form at crucial times along with never being a first choice striker after leaving Parma meant Melli never gained his confidence back, the confidence which helped him score 13 times in the 1990/91 season as well as win the UEFA Cup Winners Cup in the 1992/93 season.