Ask anyone watching EPL from last season, who the best goalkeeper in England was, and you might get Alisson as the most frequent answer. He was nothing sort of sensational last year, with his abilities one-on-one and quick feet diffusing opposition attacks with ease. There is another school of thought, which ranks Ederson above Alisson, purely because of his abilities on the ball.

But what people fail to realize that if not for this bias, Ederson might well be one of the best shot stoppers in the Premier League. He has time and again shown his quick reflexes and awesome positioning. When you throw the World Cup winner and the most expensive goalkeeper ever into the mix, you get an intense competition for the top spot.

So let’s bring out my statistical model out and see which player comes out on top. Before starting our analysis, let me define certain parameters used to measure the effectiveness of the above goalkeepers. A goalkeeper needs to be good at, once again, three things. He needs to be good at Shot-stopping, he needs to be Commanding in the box and he needs to be able to play with his feet, thanks to the insane standards set by Pep Guardiola’s building from the back philosophy!

So wear your statistical hats and let’s begin our quest to find out who the best goalkeeper was in the Premier League last season:

Shot-stopping is the fundamental duty of every goalkeeper. If you were working in a laboratory to build a great goalkeeper, this is the basic building block to making a good goalkeeper. There are multiple stats which can help some measure the shot-stopping ability of a goalkeeper. The one’s chosen here are Saves per match, Saves success %, Clean sheets and interestingly, Errors leading to goal.

In terms of saves per match, somewhat unsurprisingly, Hugo Lloris tops the chart with 3.06 saves per game. This might sound wrong initially, but think about it. The rest of the top 4 dominate possession and restrict the opposition to half chances and counter-attacks. Tottenham Hotspur had a tough Premier League season last year, which is why Lloris was called into action more often than the other goalkeepers.

Kepa Arrizabalaga, with 2.28 saves per match comes second, with Alisson and Ederson following closely with 2 and 1.53 saves per game respectively. Alisson stamps his quality on this Statistical model by making a mammoth 77.55% successful saves. Hugo Lloris, with 75.37%, Ederson with 71.60% and Kepa with 67.77% follow suit.

Alisson kept a record 21 clean sheets last season, which is an insane number. Liverpool did not concede a goal for over half a season. Ederson was hot on his heels, with 20 clean sheets. Kepa and Lloris are too far behind, with 14 and 12 clean sheets respectively.

Now this stat is going to come as a big, big surprise. Because I was certainly surprised. While Ederson and Kepa did not make any errors directly leading to a goal, Hugo Lloris made just 1. But the big surprise was Alisson, who was responsible for 3 goals directly from his error. Yes 3! When you think about Alisson from last season, this is not the first thing that comes to mind. But, like they say, stats don’t lie.

To break the tie between Ederson and Kepa, I looked at the number of penalties conceded by them. Ederson was responsible for 2 penalties in the Premier League, while the costliest goalkeeper on the planet did not make any mistakes.

When you’re a goalkeeper for a top 4 Premier League club, chances are, you are called into action on set-pieces and corner more than open plays. Thus, to succeed as a goalkeeper, you need to be assured in your handling, good at judging the trajectory of the ball and in general, commanding in the box. To measure the abilities of each goalkeeper for this parameter, I picked High claims, Punches and Clearances

Ederson has been a commanding presence in his own box, with 19 high claims being the best of the lot. Alisson made 16 high claims last season, with Kepa and Lloris close behind with 14 and 13 high claims respectively. In terms of punched clearances, Hugo Lloris tops the list with 19 punches. Alisson has 17, Kepa has 10 while Ederson has only 6 punches last season.

The third and final stat was fought neck and neck between Hugo Lloris and Alisson, with Hugo Lloris nicking it with 32 clearances. Alisson had 31 clearances, with Ederson making 18 and Kepa making 14 clearances.

Play with his feet Ever since Pep Guardiola revolutionized carpet based football, more and more positions have succumbed to his demands. It started with full-backs, then the centre-backs were compromised and now, even the goalkeepers are supposed to pass the ball out. This has put a lot of pressure of the modern day goalkeepers, with German shot stoppers Manuel Neuer and Marc-Andre Ter Stegen defining the role of modern day football.

So, to measure the effectiveness of our goalkeepers in question, No. of passes, Pass completion % and an interesting little stat called Sweeper clearance. In terms of the number of passes, there are three goalkeepers clustered very closely. Alisson made 1076 passes last season, with Hugo Lloris making 1047 passes and Kepa executing 1003 passes. It sounds almost impossible, but a parameter created due to Pep Guardiola has a Pep Guardiola goalkeeper at No. 4, with Ederson only making 920 passes last season.

Sweeper clearance basically defined the number of times a goalkeeper has diffused a counter-attack by rushing off his line and getting to the ball ahead of the opposition attacker. With 18 sweeping clearances, Hugo Lloris tops the chart, with Alisson and Ederson tied at 2nd with 17 sweeping clearances. Kepa only had 9 such clearances, highlighting his positional awareness outside of the box. 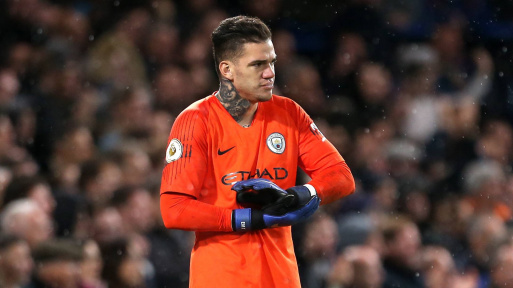 So I have defined 3 parameters and 10 attributes to measure the effectives of these goalkeepers. When I score them on these 10 attributes, the results will blow your mind!

Alisson, as expected, tops the list as the best goalkeeper in England, affirming his victory of the European Golden glove. But what comes as a bigger surprise is Hugo Lloris, the much lamented and much maligned French captain, who comes out as the 2nd best goalkeeper.

Lloris made some public howlers, but his consistency trumps his moment of lapses, with the stats rewarding him with a second position in the rankings. Kepa Arrizabalaga marginally nicked Ederson to be the third best goalkeeper among the four. This might come as a shock, but while Man City might have a sweeper keeper, his shot-stopping ability might not be on the same level as some of the elite goalkeepers in the Premier League.