Kerala Blasters defender Anas Edathodika has announced his retirement from International football following India's exit from the AFC Asian Cup. The 31 year old defender was subbed off early in the first half of the final group stage game and has subsequently called it quits to focus on his club career. Anas was the first Indian defender to earn a 1 Cr+ a season contract in the Indian Super League.

The defender put out an emotional thread of tweets to announce his retirement from the national team. Here are the quotes from his tweets:

"It comes with a very heavy heart today to announce my retirement from Indian national football team. It’s been a very hard decision to take and accept.

I love to play more years at my best, but I think it’s the time to step down and give opportunities to youngsters who can perform better.

It took 11 years to break into the national team and playing for the national team is the top achievement in my career; although the journey was short. Each and every time I tried to give more than 100 percent for the team.

I was so disappointed to pick up an injury in the opening minutes and it will hurt me forever. I just want to say a huge thanks to the coach Stephen Constantine for believing in me and giving me the opportunity and I wish you good luck for the future.

Also thanks to all the coaching staffs, teammates, the fans and who all have supported me throughout my journey for the national team. I have been blessed to play for my country, with some of the best players.

My heart will forever embrace the feeling of walking through the tunnel and out onto the field donning the national jersey with my brothers. Sandesh Jhingan, we had a good partnership in guarding the central defence, it was an emotion playing with you, Brother.

Jeje Lalpekhlua, Trust me, you’re the best room partner I ever had and I’ll miss all these! I wish you all good luck and keep making our nation proud. These memories will stay with me forever." 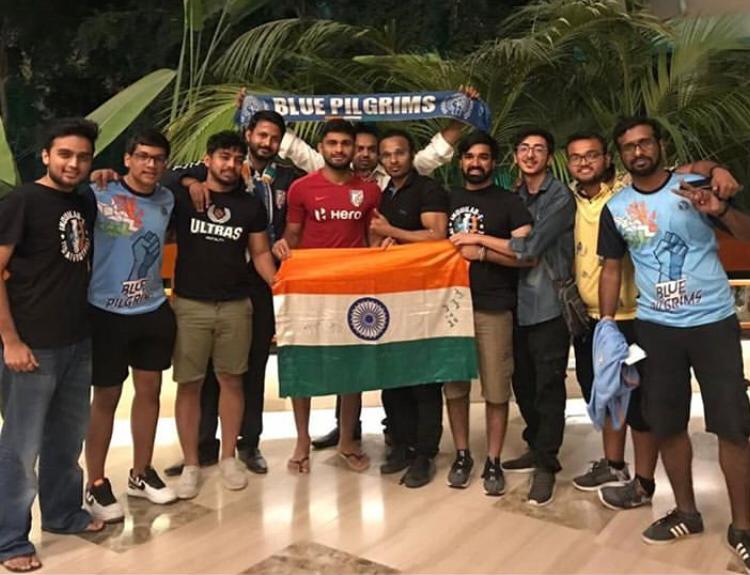 Anas never said no to his fans, breaking the barrier between the football pitch and the stands

Anas Edathodika was a late bloomer for the Indian National team, getting his first call-up in 2017, only at the age of 29. But since his first call-up, he has been a regular starter for the country alongside Sandesh Jhingan, his Kerala Blasters defensive partner. Anas was also the first player to be drafted by Jamshedpur FC in their first campaign in the 2017-18 season.

We, at indifoot, thank Anas Edathodika for his services to the Indian National team and look forward to seeing him take the field in the yellows of Kerala Blasters from January 25.