Born in Vitoria-Gastez, Alava, Zubizarreta began his youth career at Alaves. Having played for the B team for a year, Andoni was fast-tracked into the first team setup at a fairly young age of 19. But he did not start any match for Alaves. Just one season on the Alaves bench made him consider his future and he ultimately left them for another Basque club, Athletic Bilbao. Javier Clemente, then coach of Athletic, showed his faith in the 20 year old by awarding him his first start of La Liga at the age of 19, which is a very young age for a goalkeeper. It was a dissapointing 2-0 defeat to Atletico Madrid. But that did not stop him from becoming the undisputed number 1 at Athletic.

He consistently played 45 or more matches for Athletic, featuring 45 times in his debut season. Andoni was a solid goalkeeper, one whose reflexes and handling between the sticks showed immense quality and maturity of a goalkeeper way beyond his age. Zubizarreta won the Spanish double of League and Copa del Rey in his second season at the club, featuring 48 times in the process. The following season was also a fruitful one as Athletic again won the league title along with the Supercopa de Espana. 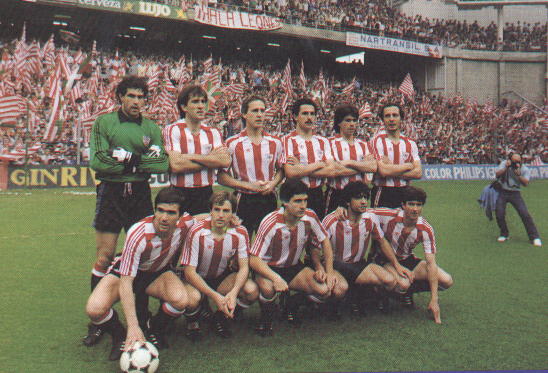 Zubizarreta lining up with the Athletic squad, the club who gave him his first cap and first league title

Zubizarreta was called up to the National squad for the first time in 1985, earning his International debut as well. His performance for Spain were really solid and thus he soon cemented his position as a first choice goalkeeper for Spain. After two barren years, Zubi decided to switch allegiances by joining Barcelona. He had risked joining a club which was known for their attacking quality and which usually threw the defenders and goalkeepers down the bus to explain performances on the pitch. But the trophies that a club like Barcelona could promise along with the money on offer were too good to say No to.

Zubizarreta represented Spain in the 1986 World Cup as well as the next three World Cups. He also represented Spain in the 1988 and 1996 UEFA Euros. While he did not taste International success with Spain, he was still at one of the best club in Europe, Barcelona. Having won domestic titles with Athletic, it was time for Zubizarreta to test himself on the highest stage of European football, the European Cup.

The €1.7 million forked out for his services in 1986 was the highest amount of money paid for the services of a goalkeeper at that time. Zubizarreta was again an undisputed starter for Barca as he played 50+ matches in his first two seasons with the club, winning the Copa del Rey in his second year at the club. But the biggest individual achievement of his career came in his first season at the club.

Andoni Zubizarreta was conferred the Don Balor award as well as the Zamora trophy by the Spanish newspapers. The golden period in Barca’s history came in the early 90s as Barca won the La Liga titles for four years on the trot, which was preceded by winning the Copa del Rey in 1989-90 season. along with two Supercopa de Espana in 1991 and 1992. Andoni also won the UEFA Cup Winners Cup as well as the European Cup with Barca.

Zubizarreta played for Barcelona for 8 years, cementing his position as a club legend

Andoni had a highly successful spell with Barca, winning every honour up for grabs. But after 8 years and 410 appearances, Zubi had decided a change in scenery would be ideal for his development and offer newer challenges. The end to his Barca career came right after the 4-0 mauling at the hands of A.C Milan in the finals of the European Cup. He was deemed surplus to requirement and was hence allowed to join Valencia. It was a bitter sweet end to his Barca story, but Zubi had no problem with the move going through.

Zubizarreta, now 33, was the undisputed starter at Valencia, as he played in a minimum of 40 games in every season. After four seasons and 184 appearances, Zubizarreta finally decided to hang up his boots once and for all. He had taken the decision for both club and country, playing in a record 126 matches at the highest level, a record which would later be broken by Iker Casillas.

Having played close to 850 professional matches for Athletic Bilbao, Barcelona and Valencia as well as a record 126 matches for Spain,, winning 6 La liga titles and 3 Copa del Rey along with the European Cup and the UEFA Cup Winners Cup, Andoni Zubizarreta had a special career which was trophy laden, playing for some of the biggest clubs in Europe. Zubizarreta had also made a record for the longest unbeaten run at the International stage partnering with the deputy goalkeeper, Francisco Buyo, a record that was broken only recently by Iker Casillas and his deputy Pepe Reina.

Zubizarreta was a consistent performer, who had never payed less than 40 matches for his club, a sign of consistency and fitness.At the age of 37, Zubizarreta called it quits after playing almost 1000 matches. It was a beautiful career of a player who had never been injured during the season and who is proven performer at the top level. Andoni Zubizarreta will always be remembered for his European triumphs as well as his consistency and humbleness,both on and off the pitch. 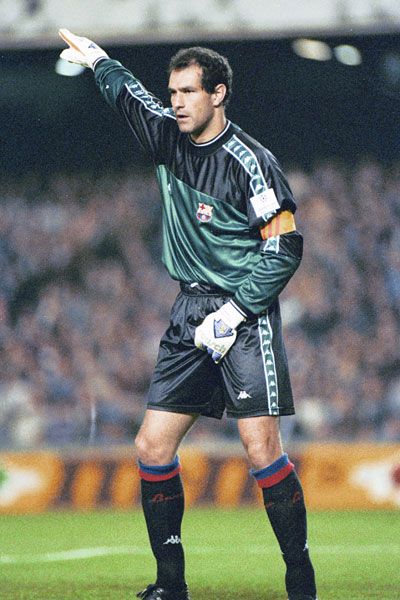 Zubizarreta was always a leader on the field, leading from the front