Asensio is the greatest Spanish wonder-kid

It was billed as the clash which would decide the fate of Zinedine Zidane and Unai Emery, a class that could possibly be the audition and baptism by fire of Neymar at the Santiago Bernabeu, the Coup de Grâce of Cristiano Ronaldo, but it turned into a game which would go on to define the importance of one 22 year old man. He played for just 11 minutes, but he could have possibly taken the game away from PSG, cost Unai Emery his job and kept Zinedine Zidane in his.

Marco Asensio came on in the 79th minute, replacing Isco, who had a start stop game with flashes of brilliance marred with sloppy play. He came on, took a couple of minutes to get to the pace of the game, and then turned it around on it’s head. On the 83rd minute, Asensio got the ball from Luka Modric, took Meunier on and left him easily to crate some space for himself on the left hand side. He then put in a low cross, which, took a small deflection, which did not change the trajectory of the ball a lot. 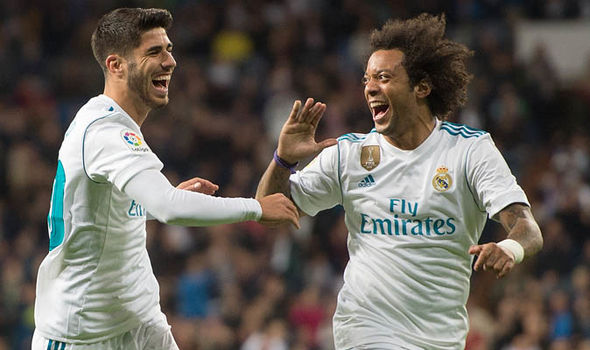 It reached Ronaldo, bobbling due to the deflection, who used his knees to put the ball past Areola and put Real Madrid ahead on the night. He might not get credited with the assist, but there is no doubt that it was he who put it on a plate for Ronaldo to finish. Asensio was not done yet though. In the 86th minute, when Kroos passed the ball to Marcelo, who was gathering momentum, Asensio got into the left hand channel to occupy a pocket of space left by Bale drooping deep.

He got the ball from Marcelo, waited for just the right amount of time and the put in a vicious low cross, which Marcelo connected with first time. That goal made it three for Real, making it all the more difficult for PSG to mount a comeback. Madrid were comfortable now at the Bernabeu, with Asensio coming on and turning the game on its head. Asensio was brilliant a few nights ago against Real Sociedad as well, keeping the in form Gareth Bale out of the team and linking up play beautifully from the midfield to the final third. Asensio has been given limited opportunity to excel this season, with the pressure of some underwhelming performances certainly taking its toll on the Real youngsters. But make no mistake, if Asensio is the best Spanish player in the Real Madrid squad, probably one of the best in Spain right now.

If Julen Lopetegui wants to go deep into the World Cup in Russia this season, he needs to build his World Cup team around Marco Asensio, who at 22, is leading the flag for the next batch of brilliant youngsters coming through Spain. Surprisingly though, with Borja Mayoral(20), Theo Hernandez (20), Jesus Vallejo (21), Dani Ceballos (21), Marcos Llorente( 23), Isco (25) and Lucas Vasquez (26) coming through and playing on a regular basis, Real Madrid are blooding the next generation of Spanish players for the years to come.