The demands of the fans were finally answered. Lacazette and Aubameyang finally started a game together for the first time. And boy did they deliver. The two combined to score 2 goals and 1 assist as Arsenal edged out Cardiff City 3-2 in a thrilling game at the Cardiff City Stadium.

The first goal of the game was made in Albania and finished off in Kosovo. Granit Xhaka, Arsenal’s Swiss midfielder put in a delicious cross for Arsenal defenders to attack. Shkodran Mustafi, the German defenders, obliged with a thumping header which put Arsenal ahead early in the game. Mustafi immediately ran towards Xhaka and celebrated the goal with the eagle celebration made popular by Xherdan Shaqiri and Granit Xhaka himself in the recently concluded FIFA World Cup.

The goal was an early reward for the positivity shown by the Gunners, but with Cardiff City also throwing bodies forward in attack, the game was uncharacteristically open for a Neil Warnock side. This, coupled with Petr Cech’s nervy moments on the ball and terrible mistakes led to Cardiff always a sniffer away from equalizing. Their positive intent and Arsenal’s shaky defense gave in finally, with Victor Camarasa, their star player, scoring the Cardiff City equalizer just at the stroke of half-time.

In the second half, the game saw 5-5 minutes swings, with both teams looking bright and attacking with intent in small periods. The quality of Arsenal showed in their five minute spell, with Ozil, Lacazette and Aubameyang combining brilliantly with Auba finishing the move off with a striker’s finish. He curled a delightful shot from outside of the box and beyond the outstretched hands of Neil Etheridge. 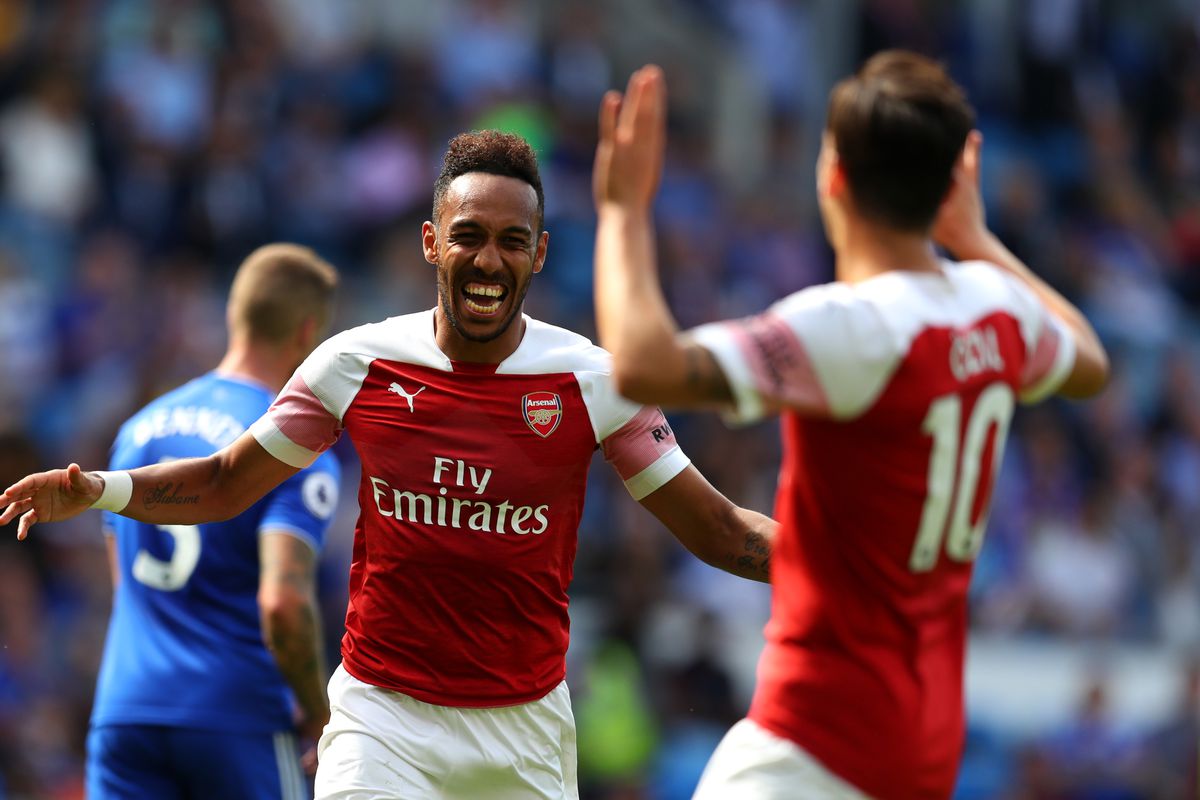 Cardiff’s second goal had a touch fortune aligned to it. Harry Arter, knowing very well that Cardiff were strong in set-pieces, threw himself to the ground with Lacazette atleast 5 yards behind him. The referee bought the dive and awarded Cardiff a free kick. This free-kick was beautifully worked, with Danny Ward finishing it off with a brilliant header, shooting the ball just beyond the reach of Cech from a long way out.

Once again, Arsenal had to start from square one, with defensive frailties showing no signs of letting up. The introduction of Lucas Torreira coupled with Ozil looking more influential in the second half resulted in Arsenal knocking on the door of a winner. And it did come, thanks to one of the finishes of the season so far by Alex Lacazette. The French striker was fed in nicely by Torreira, who then beat Neil Etheridge at his near post by arrowing a bullet shot into the top corner.

The finish was worthy of being a winner, which was what it was. Alex Lacazette capped off a brilliant game with a goal and an assist, while Aubameyang looked bright and lively with Lacazette on the pitch. But the same questions will be asked about the Arsenal defense, with Sokratis and Mustafi not a strong enough pairing for a top 4 finish. Meanwhile, Cardiff City will take big heart from this game. They finally scored a goal in the league, became the last team in the top four English Leagues to open their account. But they will have to work hard to find that balance between attack and defense and keep their dogged spirit.

Petr Cech - 5/10 - Again, the same issues plagued Cech. He could not play with his leg, while his goalkeeping was again rock solid. He’s playing on borrowed time in the first team.

Nacho Monreal - 7/10 - Had a decent game, getting in dangerous positions in attack and defending well. Had to tone down his intensity after an early yellow card.

Sokratis - 6/10 - Did not pick up Ward for the second equalizer, but was solid otherwise. The defender has settled in nicely and gone about his business quietly at Arsenal 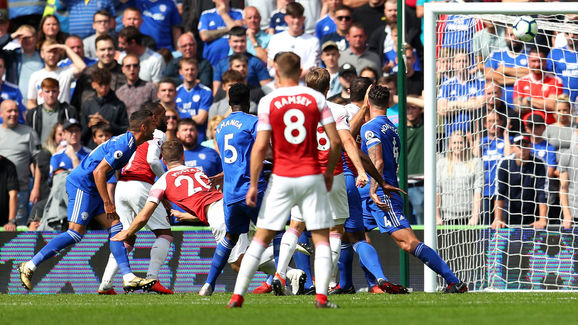 Shkodran Mustafi - 7/10 - Scored a wonderful goal, but the celebration can land him in trouble. Could have done better to defend the second Cardiff equalizer.

Hector Bellerin - 6/10 - Bellerin has had a really good start to the season, showing glimpses of the form that helped him break into the Arsenal first team. Had a great game in defense and attack.

Grant Xhaka - 5/10 - The Swiss midfielder was again responsible for Arsenal conceding a goal, with the first Cardiff equalizer resulting directly form his error. Struggled to pull strings with his passing ability.

Matteo Guendouzi - 6/10 - Had a very quiet game, not something we have gotten used to from him. Was replaced early in the second half for Lucas Torreira.

Pierre Emerick-Aubameyang - 8/10 - Auba had a brilliant game, running at defenders, cutting in from the left constantly and combining nicely with Lacazette. Tok his goal expertly with a precision finish.

Aaron Ramsey - 7/10 - Ramsey was wasteful in possession, but was energetic all game. Thrusted the team forward with his energy and kept trying things to irritate the Cardiff defense.

Mesut Ozil - 6/10 - Ozil had a quiet first half, doing nothing of note. Influenced the game a lot more in the second half, creating the Aubameyang goal and getting on the ball deep in midfield.

Alex Lacazette - 9/10 - Lacazette has shown a brilliant response to Unai Emery not starting the first few games. Had a brilliant game, harassing the defenders, creating a lot of chances for other players and capping the game with a goal and an assist. 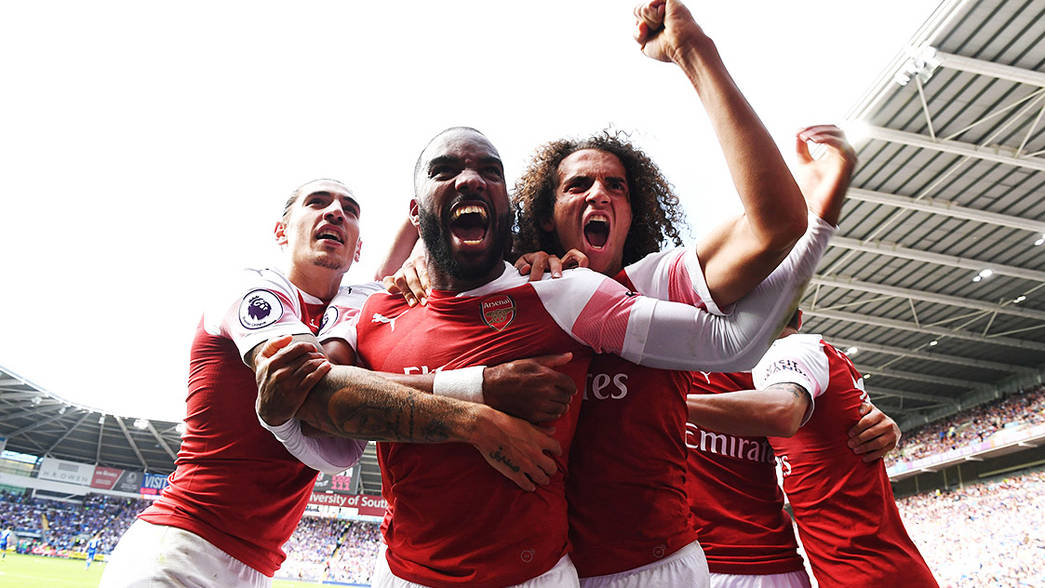 Alex Lacazette had a flawless game, single handedly pushing Arsenal over the finish line. HIs assist for AUbameyang’s goal was exquisite, while his finish for the winner was one of the best of the season. The promise shown by Auba and Laca starting together will encourage Unai Emery to start them both on a more regular basis.