Bengaluru FC stamp their dominance all over the ISL as they finally lift the title.

Bengaluru FC have done it. They have shown that the transition from I-League to ISL will not be a problem next season if there is a unified single league. They were so unlucky to not win it last time around, but this time, they managed to get over their big match hurdle and topple FC Goa in the finals.

It was an anti-climatic finale, lacking the goal-threat and attacking football we have seen all season from both FC Goa and Bengaluru FC. A final devoid of goals, a final which saw a Bengaluru FC defender do what Ferran Corominas, Sunil Chhetri and Miku all couldn’t do. It was Rahul Bheke, the Bengaluru FC centre-back, whose looping header evaded the FC Goa goalkeeper and nestled into the back of the net to settle the game.

It was a goal reminiscent of the Thiago Silva header for PSG against Chelsea in the UEFA Champions League Round of 16 all those years ago. From the time the ball left Bheke’s head till it nestled into the back of the net, it felt like an eternity, with the Bengaluru FC supporters holding their collective breathe.

The game was not as dour as the scoreline suggests though. Both Bengaluru and FC Goa started brightly, as neither wanted to start the game on the back foot. An important block by FC Goa’s goalkeeper Naveen Kumar thwarted Miku who looked like he had put his Messi boots on, dancing past every oncoming opposition defender.

The birthday boy, Jackichand Singh, was in the mood however, as he got on the end of a trademark Ahmed Jahouh long ball on the right hand side, sending in a pinpoint cross for Corominas to latch onto. But the Spanish superstar fluffed his first time volley. Even after just 20 minutes, the game felt like it had turned into an end-to-end affair. But there was a lack of cutting-edge shown from both sides, as the finals weighed on their nerves.

FC Goa were dealt a big blow near the end of the first half, with their influential captain Mandar Rao Desai pulling up with a hamstring injury. This took some sting out of FC Goa’s sails as Bengaluru FC started the brighter of the two sides in the second half. In the second half, Miku was denied a clear goal as his cheeky flick from a brilliant Xisco pass was deflected away by the crossbar.

In the end, both teams went back to their dugouts still deadlocked at 0-0. In the extra-time, Bengaluru FC were immediately pushed back and it stayed that way for the majority of the first half with FC Goa laying seize on their oppositions goal. But there was one big twist left in the game, with Ahmed Jahouh and Miku getting in a tangle with Jahouh apparently kicking out on Miku. This led to a second yellow and an immediate sending off to Jahouh, piling the pressure on FC Goa. 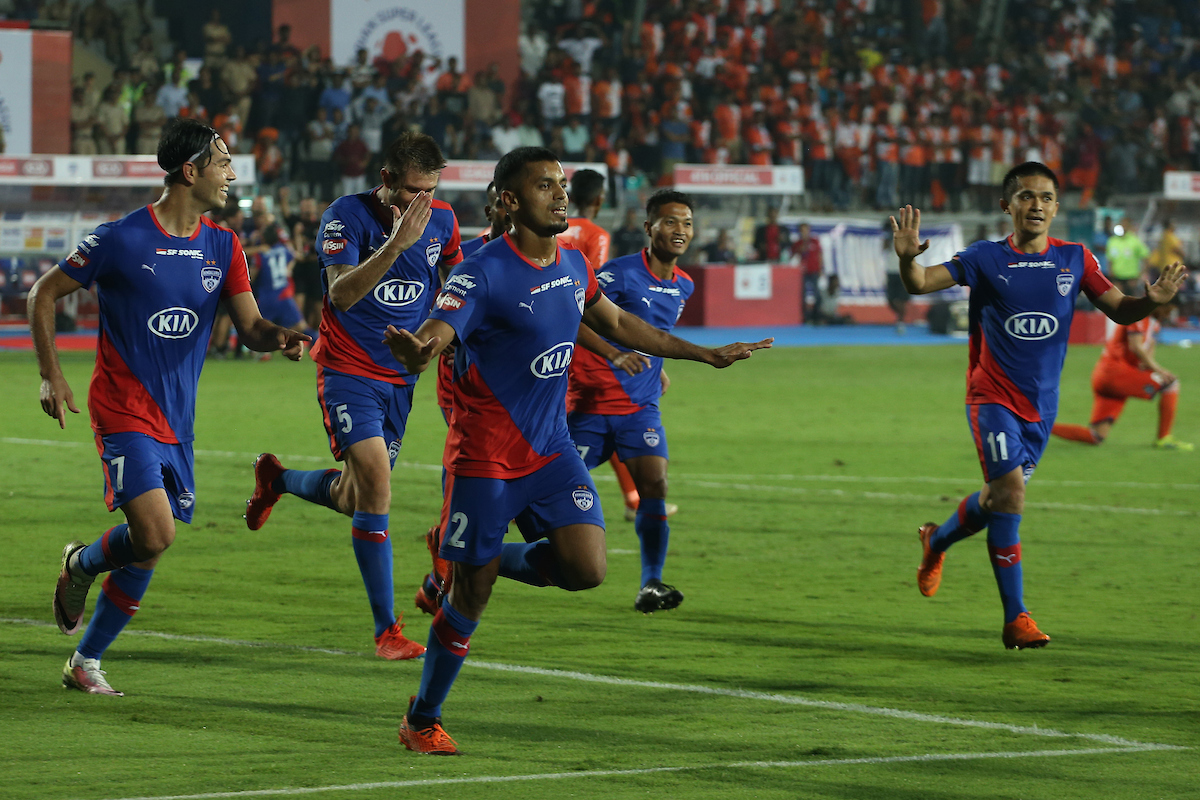 Bengaluru FC took advantage of this advantage by scoring from a set-piece, something this was discussed in length before the finals. It was a predictable goal coming from a corner and there was nothing FC Goa could do to stop it from happening. In the end, Bengaluru FC became only the third ever winner of the Indian Super League, after ATK and Chennaiyin FC.

Here is what winning manager Carles Cuadrat said of the extra time winner: "It was very exciting to win in the last moment. We were trying not to take it to penalties because they're just lotteries a lot of times. We have to be happy that the one ball in the box gave us a victory. There have been 14 goals in ISL finals and this is the seventh goal off a set piece. That shows how important set pieces are and we have worked a lot on it.

Goa is a fantastic team and has a very good defence. We know how confident they are with  Pena and Mourtada Fall as central defenders. They did their job and didn't let us score. Miku had a chance in the 81st minute but hit the post.”

Meanwhile, here is whatFC Goa’s head coach Sergio Lobera, said: "I think the key moment was that we went one man down at the end of the first half of Extra Time. I think it had been a tight game. I felt it was going to be a matter of small details and the sending off was a big handicap for us for the second half.

I think Bengaluru haven’t been better than us. Also, I think we haven’t been better than Bengaluru. I think it has been a very tight final. It’s tough losing the game this way. I think we have played a very good game. I’m very proud of the work done by my players. We also were facing a great team. And for me, it was a game that anyone could have won."