The Super Sunday of the Indian Super Cup 2018 kicks off with a mouth-watering clash between the Karnataka giants Bengaluru FC and the newly formed representative of Kerala in the I-League, Gokulam Kerala. After a clash between two teams originating from the opposite sides of the country, now is a match between two teams who represent the heart of their South Indian territory. Bengaluru FC have been playing well consistently since they were formed as a club, winning the I-League and Federations Cup twice as well as going deep into the AFC Cup.

Gokulam Kerala, on the other hand, are the newest new boys to enter Indian football. They started off by reaching the semifinals of the Kerala Premier League and followed it up by surviving their first season of the I-League, even though they were immune from relegation due to it being their first season. Their home ground, the EMS Corporation Stadium in Calicut has got a greater capacity than Bengaluru FC, emphasising the football ambitions of the club and the craze in Kerala. Bengaluru FC is a team full of star studded players. Starting from the back, they have a shot-stopper in Gurpreet Singh Sandhu who has European pedigree, playing in the Europa League. The fact that he has been tied down to a long term contract (5 years) proves his quality and the trust that Bengaluru FC have on him. With a 73% save percentage and less than a goal a game conceded over the ISL season, Sandhu is one of the best goalkeeper in the league and the country.

Ahead of him, John Johnson and Juana have been ever present in the middle of defense, with Boithang Haokip and Rahul Bheke stretching the pitch as full-backs. Again, big name players in Dimas and Lenny Rodrigues patrol the middle of the park tirelessly to let Udanta Singh and Sunil Chhetri play the attacking role brilliantly behind their star striker Miku. Both Miku and Sunil Chhetri have combined to score 29 goals between them, a tally which is more than the total goals scored by every team outside the top 4. 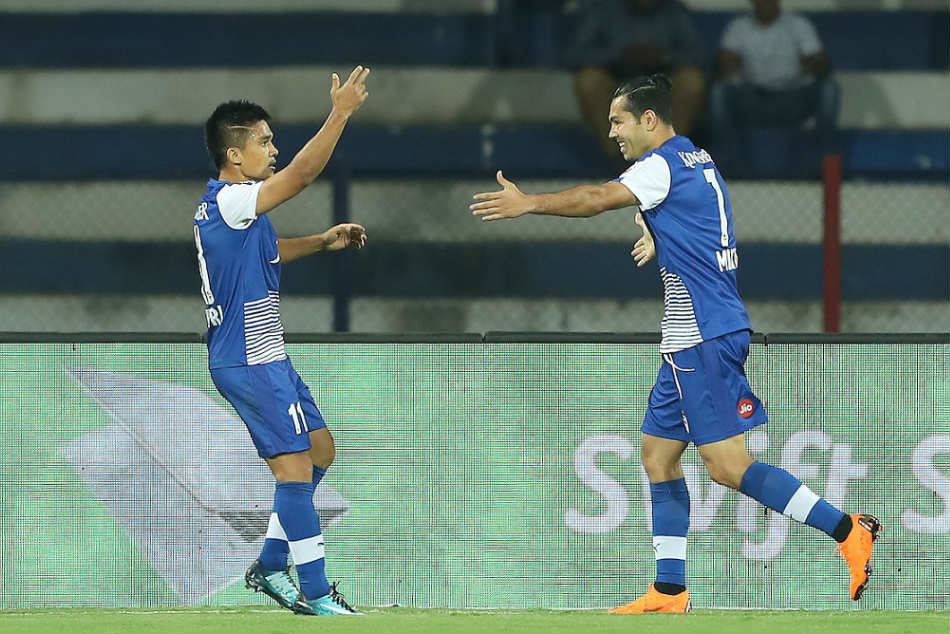 The partnership shown by Miku and Sunil Chhetri has been very promising, especially after loosing Edu Garcia mid-season to a Chinese Super League club. One thing that the short history of Bengaluru FC has also shown is the fact that they always win a trophy every season. This season, they almost won the ISL in their debut campaign, but with the finale disappointment against Chennaiyin FC, they will be putting all their eggs in the Super Cup to win the inaugural edition of the ISL and I-League merger Cup competition.

Gokulam Kerala had a slow start to their maiden I-League campaign. They had to wait till Week 4 to record their first win over Indian Arrows, and they followed it up by losing 5 games on the trot. With just 4 points in 9 games, they were having a shambles of a season. But things started turning around after the midway point of the season. Kerala went on a run of games in which they defeated Mohun Bagan, Kingfisher East Bengal and Minerva Punjab in back to back games.

Suddenly Kerala were looking like the team to beat, with wins over 3 of the top 4 teams ensuring that they will not finish the season as the bottom placed team, with a top 6 finish and direct qualification into the Super Cup becoming a priority now. In the end, failing to win any of their last three games, with two of them being draws, meant Kerala finished 7th, not bad after collecting just 4 points in their first 9 games.

For all their good form, Gokulam Kerala has found it tough to score goals, scoring less than a goal a game in the I-League. But Henry Kisekka, who was signed only in February, scoring 4 goals for them in the I-league along with scoring brace against their Super Cup Qualification opponents NorthEast United. Kisekka’s goals will be important for Kerala to stretch Bengaluru, since they have been very bad at keeping a clean sheet, with just 3 recorded in the I-League.

Bengaluru FC are one of the biggest clubs in the country, a club which has one a trophy every season since the last 4 years. This season though, Gokulam Kerala stand in their way and moving one step closer to a trophy. It will be a fascinating contest between two teams, but Bengaluru FC will start the contest as definite favourites to win the match.