Franck Ribery, 36, has been one of the greatest player in the history of the Bavarians, turing out in the Reds of Bayern over 400 times, 422 to be precise, scoring 123 goals in the process. He has been a loyal servant at the club for 12 years, shunning interests from some of the biggest clubs in the world to stay in Germany. Ribery was one of the most important cog in the historic treble winning season, narrowly missing out on the Ballon D'Or that season.

Meanwhile, Arjen Robben, who has also been a long serving player at Bayern, turned out for the Bavarians 306 times, scoring 143 goals for them. He was sensationally singled out for Bayern's Champions League woes, before winning it for them against Borussia Dortmund with a late late goal. Robben will end his 10 year association with the club, leaving in the summer.

Here is the official statement put out by FC Bayern Munich on their twitter account, annoucing the end of the Robbery era: 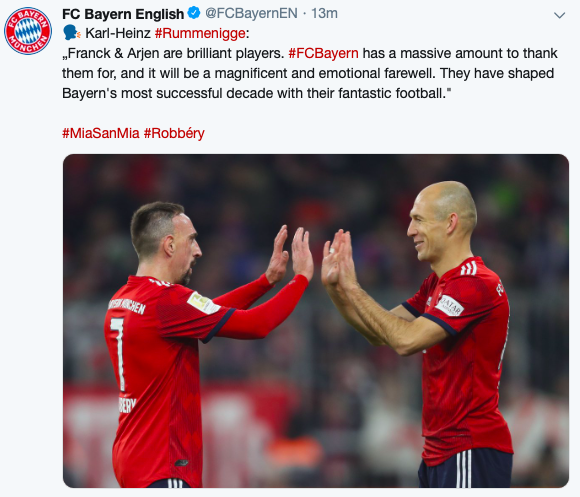 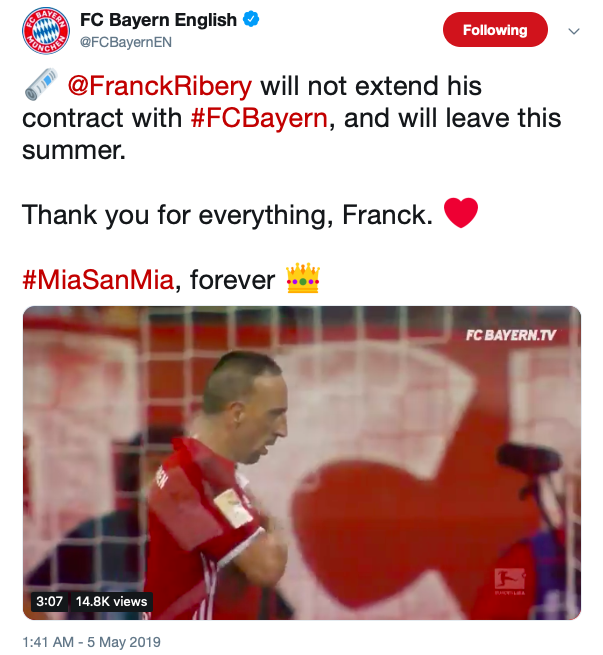 Arjen Robben confirmed his departure to Omnisport on December 2, 2018, stating that "This is my last season at Bayern. I had 10 wonderful years. Now it's time." There have been a lot of MLS clubs and Chinese Super League clubs linked with a move for Robben, while Inter Milan are also strongly linked with his signing.

Franck Ribery's departure was also widely expected, with Bayern Munich turning to youth to replace the iconic duo. Kingsley Coman and Serge Gnabry, whenever fit, have started ahead of the experienced duo, showing that Bayern Munich are grooming the youngsters, 22 and 23 respectively, to replace Robbery long term.

The news of their departure will be a big emotional hit to the Bayern supporters, who have become so used to seeing Robben cutting in from the right wing and curling one in the top left corner. They have also gotten used to Ribery dribbling at high speed, killing defenders with his quick feet and setting up goals for Lewandowski and Mandzukic before him.