It was remarked as just another media stunt. An outcry for a new and improved contract, a need to feel loved again and to show who’s in charge. But the more we heard about it, the more it seemed like it might happen. Finally that day arrived. The day when even Ronaldo was so swept aside by the reception he got, that he was recorded chanting “Juve Juve”.

Yes, Ronaldo has left Real Madrid. Yes he has joined Juventus. But the question is, can he deliver the one trophy which no other active player has won more than him?

Before talking about their chances, let’s take a look at the star-studded squad that has been assembled by Juve. They have experienced defenders, exciting midfielders, pacy wingers and talented forwards. The following players are expected to play for the first team this season:

Juventus can play multiple formations. They can go with a back three and play Ronaldo and Dybala upfront. They can play with Dybala and Douglas Costa on the wings with Ronaldo playing as an out and out striker. They can play with a back four and a three man midfield of Matuidi, Pjanic and Can. In a more attacking formation, they can start with Douglas Costa and Federico Bernardeschi on the wings and play Paulo Dybala just behind Cristiano Ronaldo. Some of the formations that they can play are as follows: 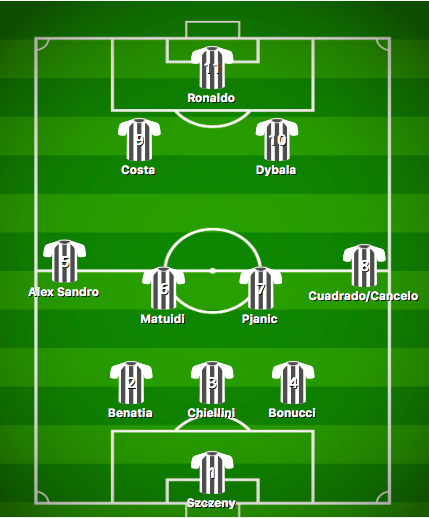 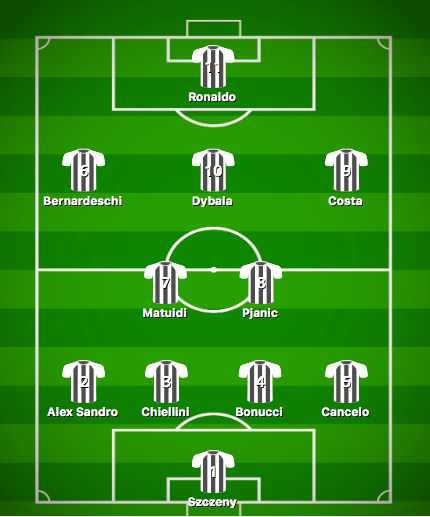 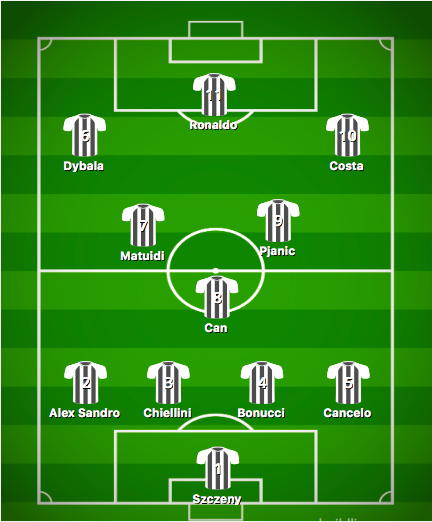 No matter what the formation is, the understanding between Dybala and Ronaldo will be pivotal and can result in the bulk of the goals scored by Juve. Ronaldo knows his body better than anybody and has adapted brilliantly to a more central role. Dybala meanwhile, had a very difficult 2017/18, with Max Allegri dropping him mid-season because of a drop in the intensity of his performance. Dybala came back strongly and ended the season with 26 goals, which were more than the minutes he was given on the pitch with Argentina at the World Cup.

Ronaldo’s signing has led to the departure of Higuain to Milan and will also be a positive for Federico Bernardeschi. The talented youngster has been struggling to cement his spot in the first team, and if Juventus decide to play a more attacking and expansive 4-2-3-1 formation, then he will really flourish on the wings. Bernardeschi is a very good passer of the ball and has an eye and a brilliant left foot to execute his vision and ideas with. Bernardeschi can manoeuvre out of tight spaces and he would absolutely relish with Ronaldo making his darting runs ahead of him.

The one signing, which has been lost in the cloud of Ronaldo and Bonucci is the free transfer of Emre Can from Liverpool. The development of Can as a midfielder has been exceptional. Moving from the centre back role, Can had been one of the most important player, if not the best midfielder at Liverpool. In his four years at Liverpool, Can made 166 appearances for the Reds, which includes effectively sitting the second half of last season on the bench due to his determination to move on from Liverpool for free. Add to that the fact that he is still only 24 years old, makes him a wonderful addition to the Juve midfield and the perfect replacement for an ageing Khedira.

Whoever be the player orchestrating the midfield and attack, the one player who can be counted upon to finish it all off is Ronaldo. Cristiano Ronaldo is a serial winner. He has made the Champions League his stomping ground, competing with himself and breaking all sorts of records every year. His hat-trick of Champions League with Real Madrid under Zidane and his goal-scoring exploits against the biggest clubs in Europe will especially be something that will excite the Old Lady faithfuls. In a candid conversation with Graham Hunter on the eve of the Michael Carrick testimonial last summer, Ronaldo said that:

“I do not feel loved at Real Madrid. I have won them three Champions League trophies, broken every records, delivered so much in marketing revenue, yet they do not treat me with the respect and love that Manchester United treated me. If United were to approach me and put a contract in front of me, I would instantly sign it.”

Needless to say, Ronaldo felt the love by the Juventus faithful even while playing for Real Madrid. His overhead kick was applauded by both Madrid and Juve supporters with equal enthusiasm. Moreover, with the kind of project that the Agnelli family have at Juventus, they are right on track to win the Champions League. They had predicted in 2013 that it would take them 5 years to sign reach a financial status where they could sign top top players like Cristiano Ronaldo. Look what they did in 2018, five years later.

Juventus are poised for yet another run deep into the Champions League, and with Ronaldo having this great habit of peaking when Champions League arrives, the mood in Turin will be one of optimism. Ronaldo has signed a four year contract with the club, and it will not be surprising that by the time he is done in Italy, he has won the Champions League yet again. And if he stays fit and keeps his hunger and desire, he just might pass Paco Gento’s record of 6 European winners medal.