Just 5 minutes away from penalties, into the second half of extra time, City pounce onto a loose ball and feed Aguero. He measures a shot onto the left side of Kepa. The shot-stopper dives with the agility of a cat and smothers the ball into his grasp. He immediately raises his left arm and starts moving in agony.

He felt something from the previous injury stoppage and knows that his time in the game is over. So while the medical team tends to him, Wily Caballero, the Argentine experienced goalkeeper gets ready to play the biggest match of his season so far. But then something incredible happens!

Watch this video if you think watching it is a better explanation.

Kepa started gesturing with his hands that he was okay and fit to continue. He was frantically gesturing, defiantly holding his ground. Meanwhile, Sarri was going crazy on the touchline. He did not want a not 100% goalkeeper to take the penalties for his team. He just wanted Caballero to come on, gesturing him multiple times to get ready to get on.

In the end, Sarri was consulted by the referee whether he wanted to make the change or not. He defiantly said that he wanted to. But that is when the referee informed him that he had talked with the player and he did not want to come off. Sarri now had no choice but to accept his player’s decision.

When the game finally resumed, 5 minutes later, Sarri was so furious that he did not know what to do. He walked all the way to the tunnel, but then came back to vent his frustrations out on Gianfranco Zola. He was constantly muttering loudly, and when the second half of extra time came to an end, he confronted Kepa. 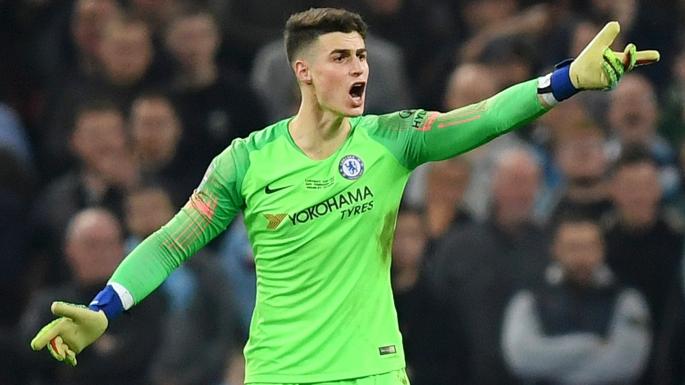 Instead of giving confidence to his 24 year old goalkeeper, the manager decided to give him a piece of his mind. Sarri was seen on camera muttering in his direction for a good 30 seconds, with Kepa walking off, making the head coach even more angry.

In the end, Sarri decided to join the huddle late, give a 10 second war cry and strutted off in anger. After a disappointing first penalty by Jorginho, another new season recruit, Kepa got his hands on but couldn’t keep out an Ilkay Gundogan penalty. Questions immediately began to be asked whether he would have saved it at 100% fitness or if Caballero would have saved it.

Ultimately, that soft penalty proved to be the difference, with Man City trouncing Chelsea 4-3 in penalties to finish their first ever title defense, winning the Carabao Cup twice in two years. Here is what Kepa Arrizabalaga had to say after the game in a curated message uploaded on twitter:

"I don’t know how it went out, it is not the best image. I have spoken with the boss. I think it was misunderstood. I understand that on television, on social media, they’re talking about this but I am here to explain it, to say that it wasn’t my intention to go against the manager. We have spoken now, and I was only trying to say I’m fine. He thought I wasn’t fine. It was in tense moments, with a lot happening

Of course I did see my number go up on the digital board. But because of that, it was until the medics had got back to the bench to explain I was fine, that I could continue. It wasn’t that I was refusing to be substituted, it was a way of trying to tell the bench that I was fine.

It has to be understood, too, that these were the last few minutes of a final, and I didn’t realize the reactions. It was only when I say they were going to change, I tried to say I was fine. It was the final minute, with a lot going on. I know the image it’s given, but I never intended to refuse to go off. It was only to say I was fine.

I don’t think it has to be the major act of this final. I understand we played a good level against one of the best teams in the world. We were close to winning, obviously we’re sad that we didn’t, and I think the team needs to continue playing like this, because today we’ve shown we can compete against the best teams. Among the negatives, we have to take the positives.”

"It was a big misunderstanding. I understood he had cramp so I didn’t want the goalkeeper to go to penalties in that physical condition. I only realised the situation after three or four minutes when the doctor came to the bench. In the meantime I wanted Caballero on the pitch, and the keeper only wanted me to know he was in condition to go to penalties, so it was a big misunderstanding.

Kepa was right, even if the way he conducted himself was wrong. Mentally he was right, he was able to go to penalties, but I only realised everything when the doctor was able to come to the bench, not before. I was really angry.

"I want to talk with him because he needs to understand that with a misunderstanding we can get in trouble, especially with the media. So I think I only have to explain the situation to Kepa but without any other problem.”

Do you think Kepa Arrizabalaga was right to cross his manager’s direct order and stay on? Also, what would you have done differently in this situation unlike Maurizio Sarri giving Kepa a mouthful just before the penalties? In the end, it will be tough to point at the injury and definitively say that it was responsible for the soft penalty. It will also be interesting to see if Kepa starts the next game for Chelsea mid-week in the Premier League.

For more such stories, download the indifoot app. You can play club based quizzes and also keep track of your favorite team’s movements on social media straight from one app. Follow us on instagram, twitter and facebook to get daily football updates.