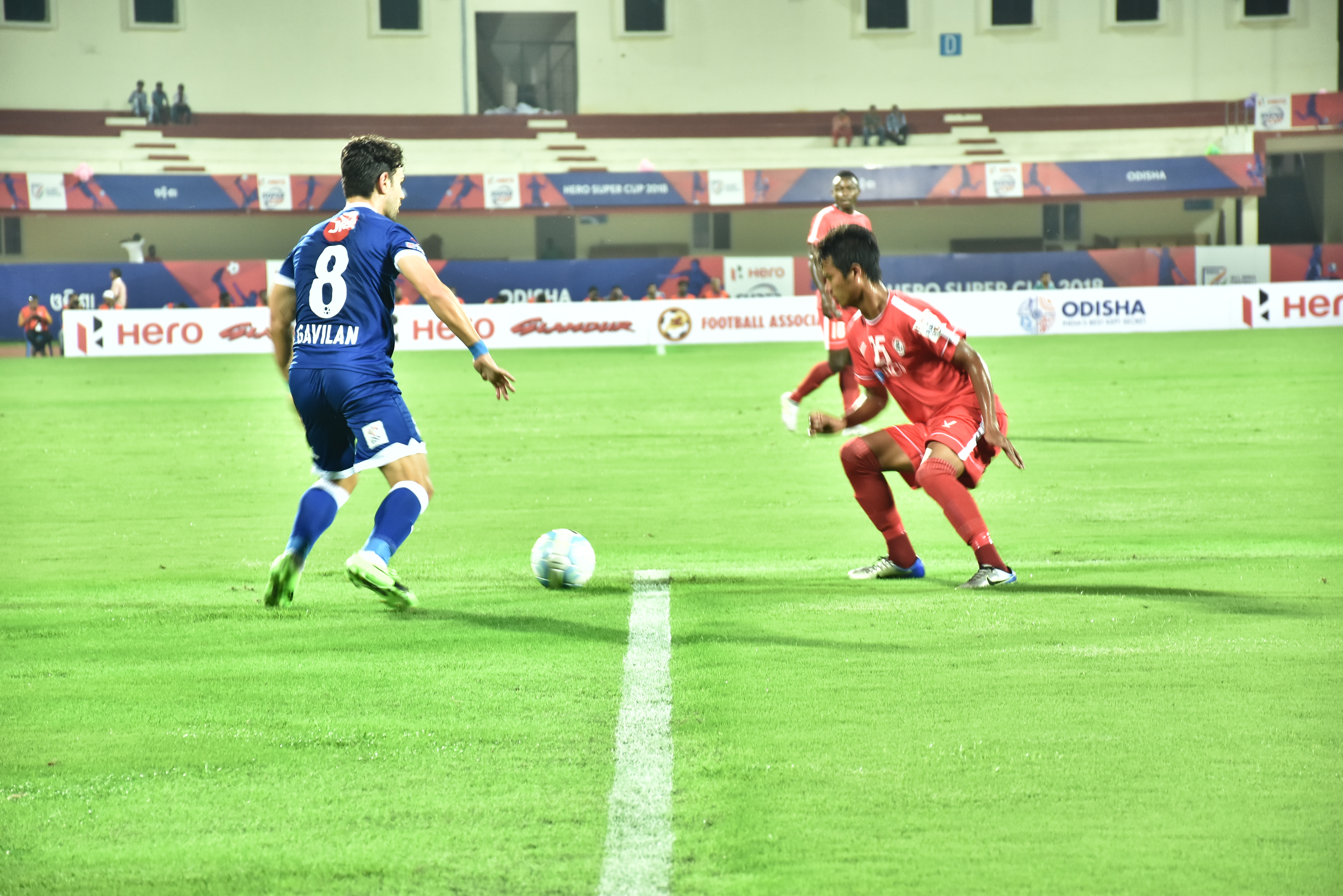 If there ever was a need to market the newly formed Super Cup, this game would make for a perfect advertisement. Aizawl FC came off the blocks with some purpose, but it seemed that Chennaiyin FC, without Jeje and Raphael Augusto, had a reply for every punch Aizawl landed. It was a game full of thrill rides, one which will surely glue football enthusiast to their TVs for the rest of the Super Cup.

The game started at a very fast pace, something which is so unlike Chennaiyin. The Supermachans like to slow the pace of the game, irritate the opposition with their tepid pace of game. The same happened, with the fast start petering out into the pace that Chennaiyin love. This led to Andrei Ionescu, Aizawl’s Romanian attacker, trying his luck with a shot from distance. The effort was anything but vicious, but a wicked deflection deceived Karanjit Singh, and just like that, Aizawl FC were in front. The key feature of Aizawl’s attack in the first half an hour was their wing play. After the goal, Chennaiyin pressed hard to find the equaliser, with James Gavilan at the heart of every Chennaiyin attack. Anirudh Thapa was in the thick of things as well, but they lacked cutting edge in the final third in the absence of their star players. In the end, there were no real chances on goal for Chennaiyin as the first half came to a close.

John Gregory decided to mix things up in order to force a response out of Chennaiyin, bringing on Bikramjit Singh and Bedashwor Singh after the half-time break. Chennaiyin began the second half seeing a lot of the ball. They were playing their classic frustrating game, patiently passing the ball around, looking for a gap to occur. But Aizawl were imperious, maintaining their shape and not giving them any space to work with.

The frustration persisted for a long time, but after the 70th minute, things started to turn around. As the substitutions started to take place for Aizawl, they started losing their shape a little. Chennaiyin were creating more chances, with Mohammed Rafi and Gavilan coming so close to equalizing. In the 86th minute, Mailson Alves struck a fierce shot which was so close to going in, missing the post by inches. But 3 minutes later, he found the back of the net. In a goal mouth flurry, Mailson put in a rebound to bring Chennaiyin back into the game, 1 minute from the 90. After 5 minutes of stoppage time, it ended Chennaiyin FC 1-1 Aizawl FC. The guy who scores an awful lot of goals for a defender, scored yet another, with his latest goal again rescuing Chennaiyin from a hole.

Aizawl started the first half of the Extra Time in the best possible way. Their Romanian attacker, Ionescu, was sent through on goal and he finished with the cutest of finished, under the goalkeeper and into the back of the net. The rest of the half was all about Aizawl throwing bodies behind the ball and defend for their lives. But Chennaiyin were off the mark all day, and they did not threaten Debnath’s goal too much in the first half.

The second half saw more of the same, with Dhanachandra Singh and Thoi Singh pushing the Supermachans forward.The pressure paid off, with Dhanachandra pulling the trigger from distance. The ball passed through a cluster of players unharmed and deftly crossing the goal-line, with Debnath helpless. This 114th minute goal meant that the game was not over just yet. Dhanachandra’s goal meant the game would be decided by the penalties, which now meant that Chennaiyin FC could not afford to slip up again, like they had thought the previous 120 minutes. But they did not learn from their previous mistakes, giving the initiative to Aizawl again, when Mohammed Rafi missed the second spot kick, flying it high above the right post.

Aizawl FC, meanwhile, did not let up and converted all 5 of their spot-kicks, meaning that the former I-League champions had pulled off one of the greatest upsets by beating the defending champions of the cash-rich ISL. Thus, I-League has proved that they are the big dogs in Indian football, with the impetus now on the ISL clubs to represent the league and prove their superiority.

Santosh Kashyap: "I’m proud of the team as they have given extraordinary efforts. I had told them to beat the best team, you have to put extra effort which we did. We move on from here.

I feel that Dodoz had four to five sitters, which he could have scored and finished the match. Chennaiyin played well but we handled the pressure even after conceding the goals. It was an excellent tie-breaker.” 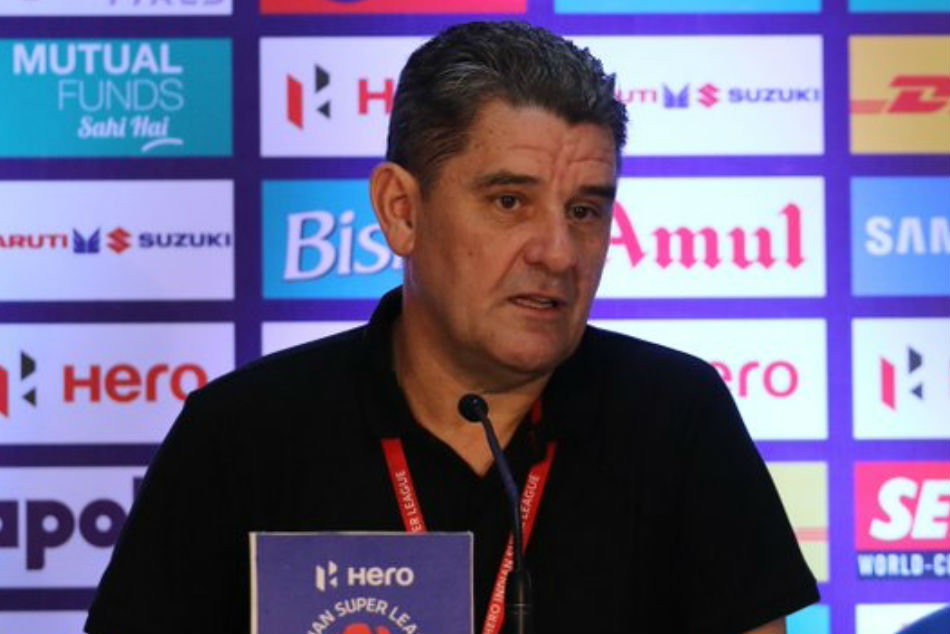 John Gregory: "We’ve had a very long season and have had to work extremely hard in every single match. We’ve had 170 training days since October 1st. It culminated in us being champions, two weeks ago. We had five of the boys going for the national team who worked really hard. They looked particularly tired on the field and I left out Jeje because he’s had extremely tough 12 months. He has put so much energy and mental concentration.

I have got nothing but compliments for my team as to how they have performed this season. Tonight, I kind of expected the performance from us; it was difficult to find the motivation after what we achieved in the last couple of weeks. But my boys gave their best. We came back twice. We had a few chances, we maybe should have done better with.

The second half was literally one-way traffic and we couldn’t get the winning goal, then we went to extra time. We’d made all our substitutions so we couldn’t make any more changes. In the end, we lost in the shootout, so we aren’t really disappointed. At the end of a tiring season, it’s sometimes difficult to motivate yourself again. The teams who hadn’t been in the playoffs or the finale, have obviously had more time. Let’s wait for their matches, I’m sure you’ll get better ones than the one tonight.”