Emmanuel Petit was a part of the golden generation of French footballers, holding both the World Cup and Euros at the same time

Petit was a tall and muscular defender, born in Dieppe, France. He used to play football with his brothers and friends on the streets and in his backyard as a child. The Monaco faithful, which was where he got his breakthrough as a teenager, associated him with his long and flowing golden hair.

Petit started his football career with a small club ES Arques-la-Bataille. He played as a defender throughout his young career and when Arsene Wenger’s Monaco invited him for trials, he was converted to a midfielder by Wenger. Monaco was impressed with what they saw and he was picked up by them at the age of 18. He was drafted into the youth setup and after growing through the academy very quickly, Petit made his debut in the same year he was signed, in the Coupe de France finals. Petit quickly became a regular starter as he cemented his place under Arsene Wenger. He played as a left-sided midfielder as well as a central midfielder. Petit won the Coupe de France in 1991 and reached the finals of the 1992 European Cup Winner’s Cup finals, losing out to Werder Bremen.

Petit was the star of Monaco’s midfield as he was constantly linked with moves abroad. In 1996-97, Petit became the captain of Monaco as he led them to a Ligue 1 title. It was a memorable season for Monaco, sweeping to the title under the leadership of their French superstar. As the interest in him grew, some serious offers started pouring in, notably from Levski Sofia, Rangers as well as Tottenham Hotspurs. But he decided to reunite with his former manager Arsene Wenger at Arsenal. Wenger reinvented him from the current central midfield role to a defensive midfield role, properly utilising his positioning sense and defensive abilities. He lined up alongside his french compatriot Patrick Vieira, bullying opposition midfield, with Arsenal winning games in their midfield. Petit had a successful first season with Arsenal as he won the League and Cup double.

This was followed by winning the FIFA World Cup with France as he scored in the Finals against Brazil. It was a spectacular goal which showcased his strength and stamina. In the 2nd minute of stoppage time, with France already 2-0 up, the goalkeeper started a counter. Petit covered the whole pitch to get on the end of a perfect through ball to slot past the helpless Brazilian goalkeeper. It was a goal which put gloss to the victory and asserted French dominance. The Petit goal was also the last World goal of the millennial. Petit had also assisted Zidane’s first headed goal.

Petit was at the peak of his career, doing well for both club and country. He was consistently playing for Arsenal as well as France. His consistency met with constant transfer speculations and in 2000, Barcelona came calling. The interest in him seemed to real to be neglected and as a result, he left Arsenal to play at the Camp Nou alongside his Arsenal teammate Marc Overmans. But things went awfully wrong for him. Petit had a horrendous season at Barcelona, with his coach Lorenzo Serra Ferrer moving him back to defense. He suffered a rash of niggling injuries and later in his biography, made a startling revelation. He claimed that the coach had no idea about his playing position and decided to make him a defender. The injuries restricted him to just 23 appearances as again he was in the transfer spotlight.

A host of English clubs were in for Petit, especially after his victory with France at the Euros. Manchester United, Chelsea and Tottenham lined up for his services. No matter what happened, one thing was sure, Petit would never join Arsenal’s arch-rivals Tottenham Hotspurs. Petit eventually decided to join Chelsea in a 7.5 million pounds deal in 2001. Finally, his Barcelona misery was over and now he could start fresh again, or so he thought.

Chelsea showed their faith in him as he regularly played for them in the league. But as the season wore on, his form started to dip, as he put in some really bad performances. He disappeared for most of the match, having very little influence on the proceedings. The poor form followed him to the International team as well as France bowed out of the World Cup at the Group stage. This was the worst defense in the history of the World Cup.

But things got better after the World Cup. Petit formed an impressive partnership with Frank Lampard. Petit’s form reflected the form of Chelsea as well as they managed to secure UEFA Champions League Qualification place by defeating Liverpool on the final day of the season. it was also the season in which Petit scored against his former club, Arsenal. But he could not build on to his performances as his third season in Chelsea was cut short by injuries. Petit had decided to hang up his boots for France in September of 2003 and the constant struggle with injuries meant that his Chelsea season never really begun as well. Eventually Chelsea decided not to offer him a new contract as Petit struggled with his knee injury. 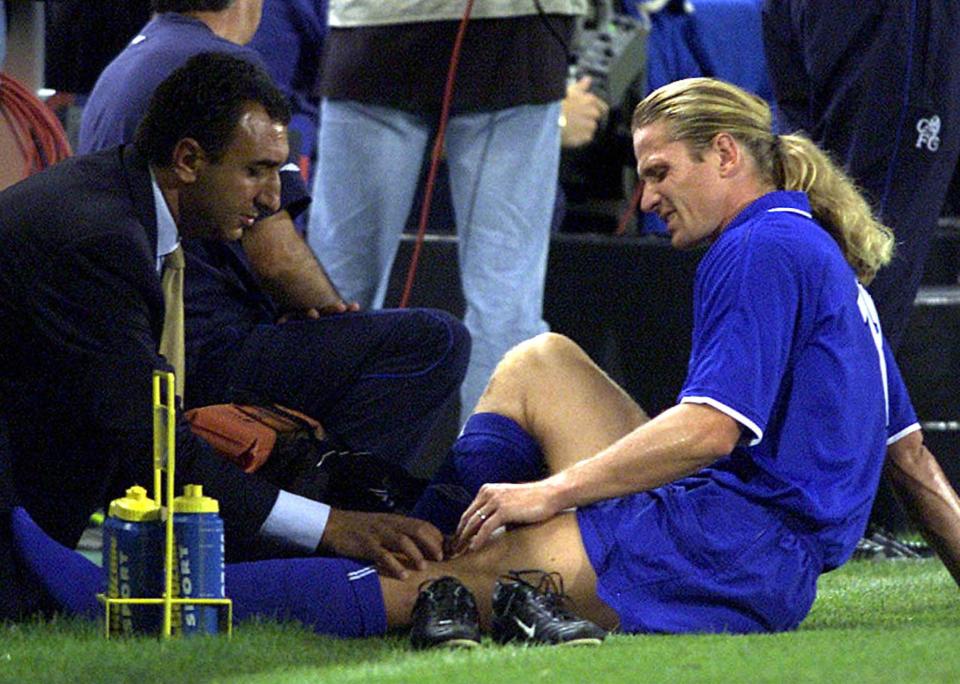 The 34 year old Petit was struggling to retain full fitness and he rejected the contract offered by Bolton Wanderers owing to his injury struggles. Eventually in January of 2005, Petit decided to hang up his boots and bow away from the sport he loved the most. It was a sorry end of a glittering career.

522 appearances, 20 goals in all club competition across three countries, with countless titles for both club and country in a glorious 16 years of playing football at the highest level defined one of the greatest midfielder of the French Golden era. There will only be one Emmanuel Petit.

Here are the excerpts from his 2013 interview with Sky Sports:

“Winning the World Cup. It was something very special for me, because I had won the Premier League and FA Cup Double with Arsenal just a couple of weeks before. In the space of two months, I had the most beautiful time of my life. When I try and remember the day of winning the World Cup, I remember just after I had scored the goal. I fell on the floor and I saw Patrick [Vieira] running to me to celebrate the goal and the victory. I remember the noise after the final whistle. It was deafening and I could not hear a thing. That was very special."

“Of course there is the goal in the World Cup final. But I also remember a goal I scored for Arsenal at Highbury against Derby County. It was a game in hand we had and we needed to win it to keep the pressure on Manchester United. It was a tough game on a cold English night. I scored a long-range goal and we won the game 1-0. That was very important. I liked scoring goals from long distance but, for me, it was a little bit strange. I started as a defender before moving to midfield. In the French history of football, defensive midfielders were not famous for scoring goals. It was different when I came to England, because the mentality and the way of playing football changed a lot. I really enjoyed my time in England."

"The pace, the skill, the vision, the movement - Figo was so gifted and so talented. Every time he ran with the ball, it was almost impossible to stop him. In games between France and Portugal and, even if we beat Portugal, I always remember the way Figo played. He was so difficult to defend against."

Too many to choose from.

"I played with some beautiful players, like Zinedine Zidane, Thierry Henry, Dennis Bergkamp, Gianfranco Zola and Patrick Vieira. To name one would be disrespectful to the others so I prefer to name a few of them. They all had different personalities, different ways of playing and different skills. Zidane was an artist with the ball, Henry was probably one of the most powerful players and Vieira had the leadership skills. They were all different in terms of their impact on the game but they were all very strong."

"When I was a kid, he was the main man in France's national team. But I also liked some foreign players, like Argentina's Mario Kempes. I also loved watching the Brazilian team which included players like Socrates. I always loved watching skilled and gifted players but also those who had something else in terms of personality whether as a gentleman or on the pitch. It does not matter if you have to beat people in football but do it with class."

"I was with William Gallas the other day. I also keep in touch with guys like Lilian Thuram, Robert Pires, Patrick and even Thierry, who I met last year. But it is difficult, because we live different lives now with different responsibilities."