Paolo Maldini: “That’s exactly it. He is Special.”
Nils Liedholm: “At 18, he already had the knowledge of a veteran”

Franco Baresi in the legendary No. 6 jersey

To understand the success and popularity of Franco Baresi, this interesting piece of a snippet is enough:

Baresi joined Milan and was given his big break in April of 1978 in an away game against Verona. The following Summer, Nils Liedholm, during one of the preseason training sessions, took Baresi to one corner and told him, “You are my first choice center-back for next season”. And as it turned out, the then 18 years old never left that position for the next twenty years.

A year after his impressive debut against Verona, Baresi was starting alongside the famous Gianni Rivera, winning the Scudetto of the 1978/79 season, which was also his first full season for Milan. He played as a centre-back or what you would call as a Sweeper back in those days, but his playing style allowed him to drift into midfield where he could start attacks from the back. It almost made him the second playmaker or a defensive midfielder of the team, such was his talent and technique.

Since Baresi became a regular at such a young age, the more veteran players in his team began calling him Piscinin - or the “Little one”. Baresi, although not amused, seemed to agree, saying “I think my strong point was never my physique. I was a pretty fast player, but above all, I was fast up here, in the head. That’s what helped me a lot. It’s a natural thing. Of course, you can improve it, you can grow with experience, but it’s one of those natural gifts”. Maldini too agreed with him.

The title triumph was followed by a brief period of uncertainty when Milan dropped to the second tier of Italian football twice. Once in 1980, immediately after winning the Scudetto, following a match-fixing scandal and when they managed to immediately get back into the Serie A by winning the Serie B in 1981, they dropped down in 1982, finishing 18th. This led to a major overhaul at the club, with big players like Aldo Maldera and Fulvio Collovati leaving and youngsters being blooded into the team. Baresi was made the captain of the team at the age of 22.

Franco Baresi in action, with the traditional, tucked out jersey.

While there was a period of uncertainty at his club, the Italian coach showed his faith in Baresi as he was regularly selected for the National team, even when he was playing in Serie B. But he did not start any of the matches as Italy finished 4th in Euros of 1980 and won the 1982 World Cup. This was probably because he was not competing at the highest level of club football at Milan, but that never wavered his mind into moving to a new club. This is what he had to say about his decision to stay a few years later: “Today things are different. A player rarely stays with the same team for 15 or 20 years now. The market changed all that – there are a lot more opportunities these days, and they’re tough to resist.”

After a few years of mid-table obscurity, Milan started an all Italian defense comprising of Alessandro Costacurta, Paolo Maldini, Franco Baresi and Mauro Tassotti along with the addition of the Dutch trio Marco Van Basten, Frank Rijkaard and Ruud Gullit. The purchase of Milan by Silvio Berlusconi was surely one of the reasons for the influx of quality players as he took over the club in 1986. Under the guidance of Arrigo Sacchi initially and later Fabio Capello, Milan had one of the best defensive units on the planet along with some of the finest attackers in Europe. Milan began terrorising opposition defence and Baresi led the defensive unit from the front, shipping just one goal in more than two matches on an average.

The Milan dominance in Europe started in 1988 when they won the league by shipping just 14 goals. This was followed by European Cup success as Milan won back to back titles in 1989 and 1990. Franco Baresi finished as runners-up to Marco van Basten for the 1989 Balloon D’Or as he was named the Italian Serie A Player of the year. More titles followed under Fabio Capello as Milan won the Scudetto and Italian Super cups in 1992, 1993 and 1994. Milan went undefeated in the 1991-92 season and they conceded a mere 15 goals in the 1993-94 season. Milan also reached three consecutive European Cup finals, losing out in two though, winning the 1993-94 European Cup. Baresi was at the forefront of everything good for Milan as he was a mainstay in the Milan lineup.

Even with such Domestic success, Baresi only made his World Cup debut in the 1990 World Cup. But it was in the 1994 World Cup that he made a name for himself, quite literally. The Nerazzurri, lead by Baresi, lost their first group match. In the second match against Norway, a rough challenge by Baresi leads to some discomfort in his right knee. Baresi knew something was wrong and he tried to labour on, ultimately succumbing to the injury and being substituted off. He was diagnosed with a torn meniscus as Italy won the match 1-0. 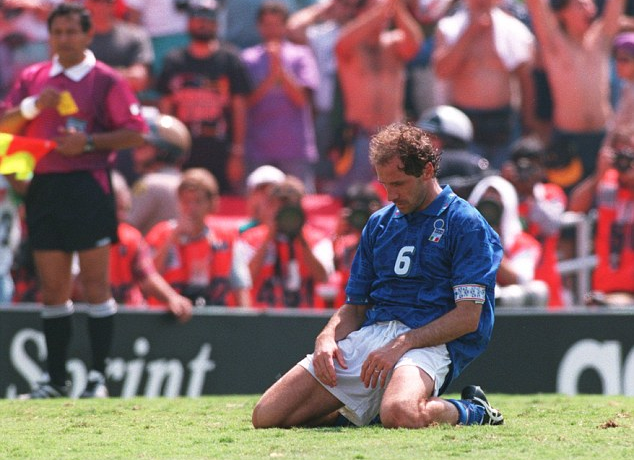 The injury should have ruled him out for at least a month and a half, but Baresi, at the age of 34, knew that it was his last World cup and as Italy started putting together a string of good results, Baresi stepped up his recovery. Wins against Nigeria, Spain, and Bulgaria saw Italy reach the finals against mighty Brazil 25 days after the injury. Baresi decided to risk it and started the finals, far from 100%. He put in a dominating and inspiring performance as Italy held Brazil to a goalless draw in normal time. But as fate would have it, Baresi missed his penalty, ultimately resulting in a Brazil victory.

The spirited performance put in by Franco Baresi earned him the nickname “Kaiser Franz” after the famous Franz Beckenbauer, who led West Germany against Italy in the 1970 semifinal, nursing a dislocated shoulder. After the match, Baresi was widely praised for his performance, with some saying that it was his performance in the National colors. Baresi said, on his starting the finals and setting an example, “You have it in your DNA. I felt I had things inside me to give and transmit. I did it my way, through work, through facts and through setting an example. I always spoke little.”

After winning another Serie A title in 1995-96, Baresi decided to hang up his boots in the following season at the age of 37. He had given it all for the club of his dreams and it was the time he passed over the baton to another Milan legend, Paolo Maldini. Very rare are such one club legends who were able to start for their club on a consistent basis, who improved themselves year after year, who had the honor of becoming the club captain after just 4 seasons at the top level and who were always the first name on the team sheet for every single game. Such was the importance of Franco Baresi that even though star players like Marco Van Basten, Frank Rijkaard, and Dejan Savicevic banged in the goals and were deemed the stars of the Berlusconi era, without a club servant like Franco Baresi, Milan would have never reached the heights of the 90s era.