“I would like to give you an explanation” - Granit Xhaka

The Arsenal club captain Granit Xhaka finally took to Instagram late last night to give an account of what he was feeling when he did what he did at the Emirates stadium. When substituted against Crystal Palace, the Arsenal fans were booing Xhaka for walking off slowing even when Arsenal were level at 2-2.

Xhaka responded to the fans by gesturing with his hands “keep yapping away” and then went on the curse under his breath. He followed it up by taking his Arsenal jersey off and going straight through the tunnel into the dressing room, instead of sitting in the dugout like other substitutes.

This incredible reaction drew concern and backlash by both fans and pundits, with many slating Xhaka to be unfit of being an Arsenal captain. There was a minority though, who were sympathetic with Xhaka’s reaction, giving the barrage of abuse he and his pregnant wife has faced over the last few months.

Interestingly, Xhaka has always divided opinions, with fans incredulous as to why both Arsene Wenger and Unai Emery start him week-in week-out even though the fans don’t see his value. He has been regularly keeping Lucas Torreira out of the first team, with the Gooners vocal about their bemusement at seeing the young Uruguayan midfield destroyer on the bench.

Here is the statement in full, released by Granit Xhaka, a night after failing to make the bench in the penalties loss to Liverpool in the Carabao Cup:

“After taking some time to reflect on what happened on Sunday afternoon, I would like to give you an explanation rather than just a quick response.

The scenes that took place around my substitution have moved me deeply. I love this club and always give 100% on and off the pitch.

My feeling of not being understood by the fans, and repeated abusive comments at matches and in social media over the last weeks and months have hurt me deeply. People have said things like “We will break your legs”, “Kill your wife” and “Wish that your daughter gets cancer”. That has stirred me up and I reached boiling point when I felt the rejection in the stadium on Sunday.

In this situation, I let myself be carried away and reacted in a way that disrespected the group of fans that support the club, our team and myself with positive energy. That has not been my intention and I’m sorry if that’s what people thought.

My wish is that we get back to a place of mutual respect, remembering why we fell in love with this game in the first place. Let’s move forward positively together. 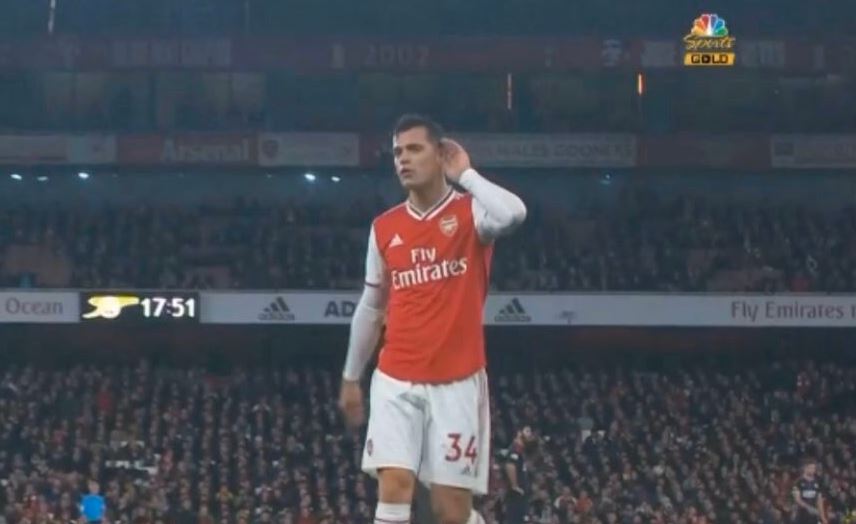 Some blue tick twitter accounts have come out in support of Xhaka, chastising sections of Gooners who derive pleasure by scapegoating Arsenal players. Meanwhile, the ESPNFC crew have given a total disregard to the reasons behind Xhaka’s action, especially in a week in which Australian T20 specialist Glenn Maxwell came out and announced that he is taking some time out due to Mental health issues.

Granit Xhaka has probably been the first captain since Robin van Persie/Mikel Arteta to play in the Arsenal first team so regularly and frequently, with Per Mertersacker and Laurent Koscielny both going through long spells of injury when named first team captains. With Xhaka now coming out and making a statement, it will be interesting to see how Unai Emery responds against Wolves.

It is a crucial game for Emery, who is facing the kosh of the board and the supporters. Arsenal are comfortably outside the top 4 in a season where Spurs are facing the heat due to players running down contracts and Chelsea playing the kids. With Arsenal backing Emery in the summer transfer window, the pressure is on the Spanish tactician to deliver top 4 and Europa League title to do justice to the investment made.