Kochi: Everything clicked for Kerala Blasters against Chennaiyin on Friday. The passes reached their intended targets, the shots tested the goalkeeper, the chances were converted and a late retaliation was easily dealt with by eleven players who played like they accept nothing less than a win.

Every footballer plays to win but sometimes their attitude does not reflect on their performance or the final result. On Friday, it did. Chennaiyin's attack was shut down for most parts by the Yellow Army who were hungry and showed desire.

Blasters were first to win second and loose balls, pressed all over the pitch and got stuck in right from the off. Clear-cut chances were few and far between for the visitors and whenever they did come, Dheeraj Singh was a stubborn man in between the sticks with close-range blocks and reflex saves.

Matej Poplatnik had been struggling all season, partly due to a lack of service but the striker and his partner Slavisa Stojanovic offered aplenty in the attacking third. Stojanovic had a powerful shot blocked by Karanjit Singh early on and his teasing cross into the box minutes later was perfectly delivered for Matej Poplatnik to head towards goal. Only a combination of the goalie's fingertip and the post saved Chennaiyin.

As Mohammad Rakip took a throw-in on the right flank in the 23rd minute, the Chennaiyin defence failed to react to Courage Pekuson's turn and cross into the box. Karanjit also messed up with his attempt to get to the ball and allowed Poplatnik to gladly head into an empty net. 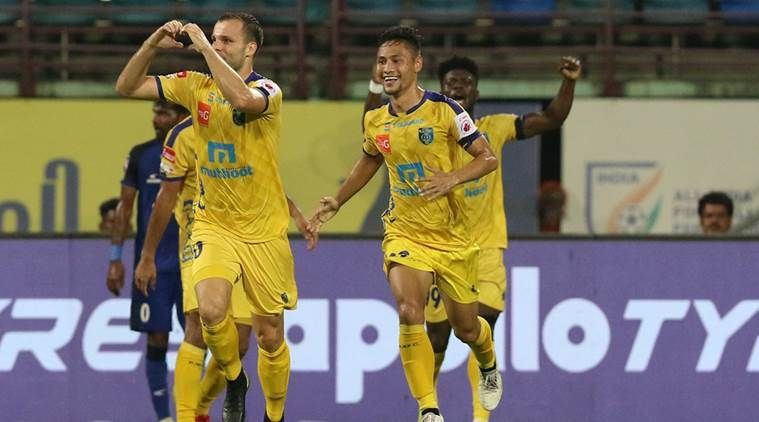 As each goal went in, John Gregory hoped for a response from his team. They used to come back, during the whole of their title-winning run but a comeback never looked probable and Blasters added to their tally in the second half.

It was a good team move that yielded Blasters their second goal. Seminlen Doungel won possession of the ball in midfield, charged at a disorganized defence, passed to Sahal Abdul Samad who picked out Stojanovic at the far post. Poplatnik was at the right place at the right time to provide the finishing touch again, this time a volley into the back of the net.

Sahal Abdul Samad has all the required skills to be one of the best midfielders in India. And he was at the heart of all the good things Blasters did in the game. He picked up the ball in midfield his own half and initiated a quick counter-attack in the 71st minute. Seconds later, he was inside the Chennaiyin box latching onto a loose ball which he emphatically thwacked into the net to score his first ever goal in ISL.

Kerala Blasters' last two games of the season are against Goa and NorthEast United, two teams in the top four. The Yellow Army has shown enough to suggest that they can have a say in the top four race. More importantly, they have treated their fans at home to a win after 384 days. All in all, it was a good day at the office for Nelo Vingada.