Ulises Davila's goal in the ninth minute gave Delhi the lead and opened the game up in midfield. Boithang Haokip scored in the 19th minute to bring Bengaluru level. Sunil Chhetri's 72nd-minute strike looked to have put Bengaluru in the driving seat before Daniel Lalhlimpuia struck twice (77', 80') to seal a win for his team.

Bengaluru, however, are perched at the top of the table with 31 points from 16 matches. Bengaluru started on the front foot and almost scored in the first minute. Udanta Singh combined with Miku on the right flank, dribbled into the box and squared the ball back to the Venezuelan striker who shot wide of the target.

Despite the visitors' ascendancy, Delhi Dynamos drew first blood in the ninth minute. Nandhakumar Sekar's low cross into the box was punched into the feet of Davila by an outstretched Gurpreet Singh Sandhu. The Mexican forward found the back of the net with a powerful shot.

Bengaluru were back in the contest in the 19th minute. Similar to the opening goal, Francisco Dorronsoro had trouble collecting a Xisco Hernandez cross from the right flank and his punch sent the ball to Boithang whose first-time shot struck the net. 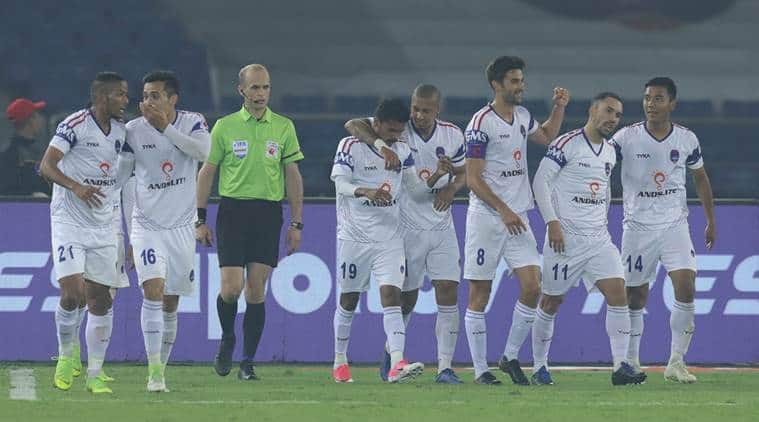 The teams were much more cautious in their approach after the break. Delhi had chances to take the lead as the second half wore on but failed to convert them into goals. The league leaders, at the other end, pulled ahead in the 72nd minute.

The visitors made full use of Delhi's pressing and the space available behind the defence as Xisco found Chhetri's run with a perfectly-weighted lobbed through-ball. The India striker dribbled into the box and poked the ball past Dorronsoro.

Delhi's attackers sprang to life and moved forward in search of the equaliser. They were rewarded in the 77th minute when Narayan Das delivered a teasing cross into the centre of the box from the left flank. Daniel brought the ball under control and slammed the ball straight at Gurpreet who could not prevent the strike from going into the net.

Delhi looked a rejuvenated side in the second half and consistent pressure in the attacking third helped the hosts regain their lead three minutes later. Juanan's defensive header off a Romeo Fernandes cross fell to Daniel. The former Bengaluru striker drilled a low shot towards goal which took a deflection off Rahul Bheke and beat Gurpreet at his near post.

Daniel outmuscled Albert Serran and entered the box in the 86th minute. Gurpreet pulled off a good save to deny the striker a hat trick but the damage was already done by Delhi whose second-half performance gave them a morale-boosting win.