New Delhi: Delhi Dynamos FC and FC Goa settled for a goal-less draw in a closely contested Indian Super League match at the Jawaharlal Nehru Stadium in Delhi on Monday. FC Goa did ramp up the pressure throughout the game but just could not get the goal. Coach Sergio Lobera will view the result as two points lost while Delhi would not be too disappointed.

FC Goa added a point to their tally to make it 25 points from 14 matches and remain third in the standings. Delhi are rooted to the eighth spot with 11 points from 14 games. The  game began at a good tempo with both sides looking for an early breakthrough. There were chances at both ends.

A corner-kick by FC Goa towards the far post in the fourth minute had the Delhi backline in disarray. Mourtada Fall sneaked in behind Gianni Zuiverloon, outjumped the centre-back but only headed wide. Two minutes later, a ball behind the FC Goa defence caused confusion between Fall and custodian Naveen Kumar. Daniel Lalhlimpuia tried to take advantage but his weak shot rolled wide, handing the visitors a lucky escape.

FC Goa soon started to stamp their authority. Hugo Boumous and Ferran Corominas combined well at the edge of the box and the latter released the former into the box with a clever through-ball, but the Moroccan midfielder’s shot flew inches wide. Neat passing on the edge of the box in the 36th minute resulted in Corominas laying the ball for Jackichand Singh to shoot. However, a minor deflection saw the winger’s powerful shot go off target.

FC Goa had 57 per cent possession in the first half but not without a struggle at the back. Delhi had the visitors’ backline on red alert when Rene Mihelic pinched the ball off Fall a few minutes before half-time. Chhangte carried the ball forward and saw his shot blocked by Carles Pena before Ahmed Jahouh pulled off another block to deny Marcos Tebar’s piledriver from the rebound. 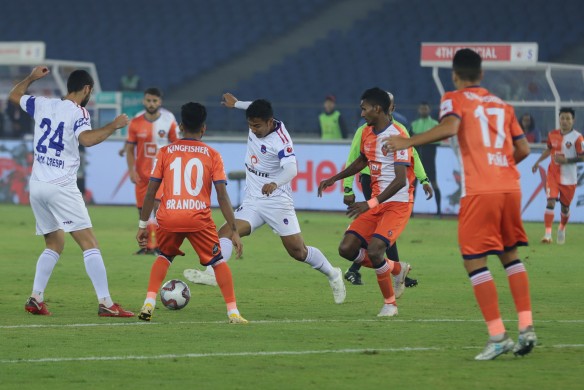 FC Goa continued to push for the opening goal after the change of ends. Brandon Fernandes split the defence with a good through-ball for Edu Bedia to latch on to inside the box but Delhi goalkeeper Francisco Dorronsoro was quick to come off his line and clear the danger. Dorronsoro came to Delhi’s rescue again with a couple of excellent saves after the hour-mark. First with his legs to deny Edu, who was sent through on goal by Brandon.

The Goan then almost turned scorer with a shot from distance that forced a good reflex save from Delhi’s Spanish custodian. Delhi produced dangerous moments in the attacking third to keep the FC Goa defence on their feet but they struggled to test Kumar in goal and had zero shots on target in 90 minutes.