MARGAO: FC Goa returned to their free-flowing ways as they hammered ATK 3-0 in the Hero Indian Super League (ISL) clash at the Jawaharlal Nehru Stadium on Thursday. Sergio Lobera's team were on top throughout the game and denied the visitors space and time on the ball.

Jackichand Singh scored in the first minute of play and Ferran Corominas leapfrogged Bartholomew Ogbeche to the top of the Golden Boot standings by scoring twice in the second half. The win takes the Gaurs to the second spot on the table and in prime position to clinch a play-off spot. ATK, however, have been left six points adrift of the fourth spot with two games to play which makes their chances of going through extremely difficult.

The hosts got off to a lightning start, scoring a goal in the very first minute. 53 seconds into the first-half, Seriton Fernandes moved forward down the right flank and fed Corominas into the box. The striker found Jackichand who, from the centre of the box, thumped a first-time strike into the net.

Goa looked to be in the mood to score and ATK struggled to keep things under control. In the 13th minute, Mandar Rao Dessai skipped past a bamboozled Pritam Kotal on the left flank and fired a low cross into the box.

Corominas met the ball with a delicate touch which beat a diving Arindam Bhattacharya in goal but fizzed inches wide of the goal. The ATK custodian was then required to pull off a fine save close to the half-time break to halt a flowing move and stop Goa from doubling their lead.

Coro charged at the backline through the centre and released Seriton into the box. The Spaniard then received the full-back's cross on the turn, outfoxing Everton Santos inside the box in the process. But the goalkeeper dived to his left to deny the striker from close-range. 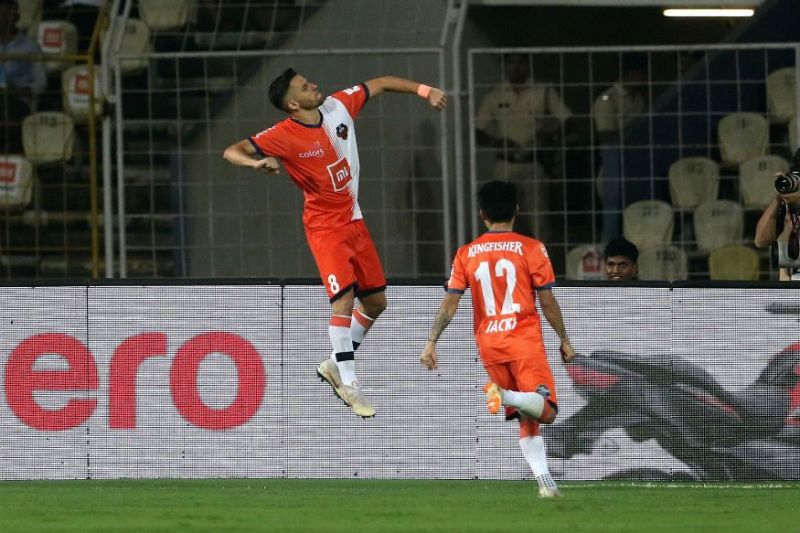 ATK, who had to win the game, were forced to defend higher up the pitch as they sought an equalizer, but were caught out by a quick counter-attack in the 52nd minute.

Edu Bedia picked out Coro's run down the right flank and the forward found Mandar waiting at the edge of the box. The Goan's shot was parried into the path of Coro by the rival goalkeeper and the striker slammed home his 12th goal of the season.

After struggling to influence proceedings in the first hour, Edu Garcia finally tested Goa goalkeeper Naveen Kumar with a brilliant shot from the edge of the box as Steve Coppell's side sought a response. The Goa goalkeeper, who had very little to do in the game, was alert to tip the ball over the bar.

Balwant Singh released Edu into the box a few minutes later as ATK desperately pushed forward for a goal but the midfielder's powerful shot from a tight angle was saved by Naveen. ATK's attempts to get back into the game just did not bear fruit as Goa started to cruise.

Things turned from bad to worse for ATK as Ricky Lallawmawma fouled Coro inside the box and conceded a penalty in the 81st minute. The Spaniard stepped up and made it 13 goals for the season as Goa doused ATK's fire with an excellent performance.