Robin Singh (17th and 65th minute), Marcelinho (45+2) and Ashique Kuruniyan (70th) found the target for Pune while Carlos Calvo (76th) scored a consolation goal from the penalty spot for Jamshedpur who slumped to their first defeat of the season at home.

The result put a huge dent in Jamshedpur's chances of qualifying for the play-offs while Pune City's slim hopes of going through remain alive. Cesar Ferrando's side are now four points behind fourth-placed Mumbai City with two games remaining. Pune, on the other hand, are nine points behind Mumbai with three matches in hand.

Jamshedpur's defeat meant league leaders Bengaluru FC became the first team to qualify for the play-offs ahead of their away match against Delhi Dynamos on Sunday.

The home side started the game with urgency and should have scored at least twice within the opening 15 minutes but for some wasteful finishing. Calvo moved forward from the left and picked out Farukh Choudhary at the far post. However, Farukh blazed his volley over from point-blank range.

Calvo then forced Pune goalkeeper Kamaljit Singh into a save before Mario Arques went close twice. First, his shot from a corner was blocked on the line by Marko Stankovic. Two minutes later, a long ranger from Arques was denied by the crossbar.

The spurned chances came back to bite Jamshedpur in the 17th minute when Pune broke forward before Diego Carlos lashed a shot straight at Jamshedpur custodian Subrata Paul who could only parry it. 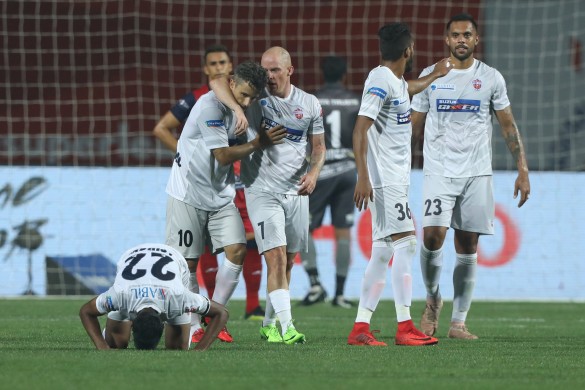 Iain Hume latched on to it but his shot hit the post before falling for Robin who swept it home. A rattled Jamshedpur mounted a fightback but did leave space behind that Pune looked to exploit. The urgency mounted from Cesar Ferrando's men as the half wore on, but they were dealt a body blow right on the stroke of half-time from another quick Pune counter after a threatening Jamshedpur move was broken down.

Hume was the architect, threading a brilliant through-ball for Marcelinho in behind the defence. Subrata came out to close down the Brazilian but could not clear the ball. It fell again to Marcelinho who had the presence of mind to swivel and lift a finish into the open goal.

Jamshedpur, in a bid to find their way back into the game, threw on Michael Soosairaj but left themselves very open at the back. Pune duly capitalised and scored twice after the hour mark. In the 65th minute, Ashique did extremely well to run down the left and keep the ball alive on the touchline. He found Robin inside the box who beat Paul at the near post with a thumping strike.

Five minutes later, it was Ashique's turn to score with a powerful side-footed finish after good work by Marcelinho as Jamshedpur looked crestfallen. Pune did gift Jamshedpur a goal in the 76th minute when Martin Diaz handled the ball inside the box and Calvo converted the penalty.

However, despite exerting pressure on the visitors, Jamshedpur were unable to find more goals and now have been left with a mountain to climb in the race for the play-offs.