Jamshedpur: Jamshedpur FC thrashed Bengaluru 5-1 in their final game of the 2018-19 Indian Super League (ISL) at the JRD Tata Sports Complex on Wednesday.

Thongkhosiem 'Semboi' Haokip (16') scored first as Xisco Hernandez missed an opportunity from the spot. Augustin Fernandes (45+2') equalised in stoppage time before half time. Pablo Morgado's (56' and 57') brace was sandwiched between Michael Soosairaj's (54') and Carlos Calvo's (61') goals as the Men of Steel came from behind to end their campaign on a sweet note.

With their first place secured, Carles Cuadrat made eight changes to their side. Ajay Chettri and Sairuat Kima make their full ISL debuts as Rino Anto was named skipper. The Blues had only four men on the bench, which included three academy graduates. Soosairaj and Morgado came back into the Jamshedpur XI as an injured Tim Cahill returned to India, looking on from the director's box.

Bengaluru drew first blood against the run of play. Augustin embarrassingly failed to follow up the ball lobbed by Xisco off his own clearance. Semboi made the chase with the former India international caught napping and slotted the ball past Subrata Paul, who could have done better by coming off his line.

The visitors could have doubled their lead before the half hour mark when Edmund Lalrindika was pulled down by Tiri inside the box. Xisco's attempt from the spot was not one to write about as Paul saved the penalty, avoiding further predicament.

It was another comedy of errors that led to the equaliser right on the stroke of half time. Soram Poirei came off the six-yard box and lapped up the ball only to spill it. Augustin leapt over the 'keeper and squeezed home from a tight angle. Redeeming himself, the defender ran back the length of the pitch to embrace Paul for his earlier mistake.

Inexperience caught up with the visitors in the second period as Jamshedpur went on to record their biggest margin of victory thanks to a seven minutes of madness where they scored four goals. Soosairaj pranced on from the left flummoxing Rino to swing the ball past Poirei into the far corner. Morgado flattened out with his two goals inside ninety seconds. 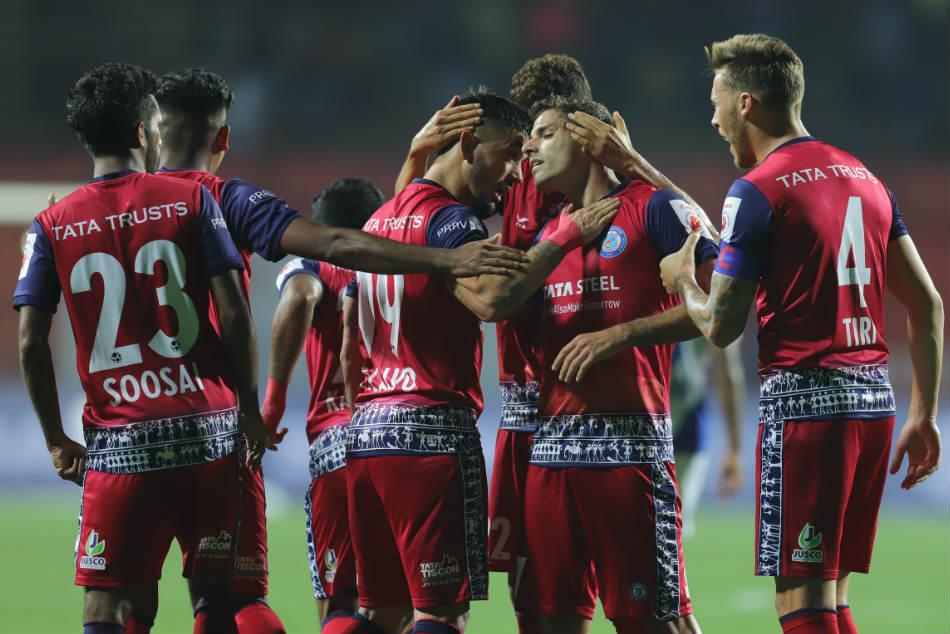 Rino was at fault again as the Valencia-born Morgado was allowed space to head home from Calvo's cross from the right. Moments after resumption of play, Calvo released Jerry on the right as the youngster crossed in low into the box.

Morgado beat Sairuat and changed feet to slot the ball calmly into goal. Right after the hour mark, Gursimrat Gill gifted a freekick right on the edge of the box for Calvo to put his name onto the scoresheet. Goalkeeper Poirei did get a hand to it but only parried it further into the net.

Gill was then sent off for a second bookable offence, this time for a high boot Morgado. Jamshepur interestingly could not add further despite the numerical advantage on the pitch. The Jharkhand-based side finished fifth for the second consecutive season while Bengaluru will look to shift focus on their first leg of the playoff on 8 March.