Kochi: Ten-man NorthEast United FC stood firm to play out a goalless draw and deny Kerala Blasters FC a chance to end their Indian Super League campaign with a win, in Kochi on Wednesday.

Having already secured a spot in the playoff, NorthEast confirmed the fourth place in the standings with 29 points from 18 games and will now face Bengaluru FC in the semi-final. FC Goa will face Mumbai City FC in the other semi-final.

Blasters ended their league season in the ninth spot with just two wins and 15 points after 18 matches. After a tentative first few minutes, a powerful shot from Courage Pekuson got Kerala going.

Twelve minutes into the game, Matej Poplatnik dribbled forward down the left and chipped the ball to Pekuson at the edge of the box. The Ghanaian midfielder chested it down before hitting a fine volley that flew inches wide.

Kerala pushed forward and threatened to take the lead. In the 21st minute, Seiminlen Doungel ran clear down the right and sent a dangerous cross into the box which was almost turned in by Slavisa Stojanovic.

NorthEast coach Eelco Schattorie was forced to field a weakened side and his woes were compounded when centre-back Gurwinder Singh was sent off in the 23rd minute. Pekuson dashed forward on a counter-attack and fed Poplatnik through on goal. The Slovenian striker was brought down on the edge of the box by Gurwinder, who happened to be NorthEast’s last man in defence, and promptly received the marching orders.

Rowllin Borges slotted in at right-back as the visitors sat back and hoped to catch the hosts on the break. Pekuson went close again before the break as he shimmied away from Borges and cut in from the left flank but his low driven shot ricocheted off the inside of the post. 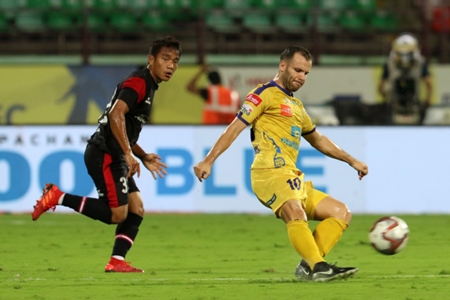 Doungel was sent clear on goal at the stroke of half-time but an excellent save by Pawan Kumar kept the scoreline unchanged. Despite the numerical disadvantage, NorthEast had the Blasters defence in a spot of bother early on after the break.

Panagiotis Triadis crossed from the left and found Lalrempuia Fanai inside the box whose shot was kept out by a diving Dheeraj Singh. The forward latched on to the ball on the rebound but Anas Edathodika got in the way to make the block.

Blasters found it easier to counter and used the space in behind the opposition’s defence. Pekuson darted forward and crossed for Seiminlen Doungel who chested it down for Stojanovic to shoot in the 58th minute.

The effort was parried away bravely by the NorthEast custodian who kept the visitors in the match. The goalkeeper was called into action again in the 69th minute when a Stojanovic shot took a deflection off Shouvik Ghosh and swerved in towards the goal. A fantastic finger-tip save by Pawan helped the ball onto the crossbar.