Guwahati: NorthEast United FC were left to rue missed chances, particularly at the end, as they settled for a 1-1 draw against Delhi Dynamos FC in an Indian Super League (ISL) clash here Thursday. NorthEast United have won only one of their last seven matches but continue to be in contention for a semi-final spot.

The point sees them move four points clear of fifth-placed Jamshedpur FC but they have played a game more, while Delhi Dynamos remain eighth.

After an even first-half, Marcos Tebar put the visitors in the lead in the 67th minute. Star striker Bartholomew Ogbeche equalled Ferran Corominas in the race for the Golden Boot race by scoring his 11th goal from the spot in the 71st minute.

The Highlanders went for the kill towards the end but saw chance after chance go amiss, including a shot from Rowllin Borges which was clawed on to the crossbar by an alert Delhi goalkeeper Francisco Dorronsoro.

NorthEast looked to get Ogbeche involved in the game right from the start with several long balls. However, the offside flag and timely interceptions by the Delhi backline prevented the Nigerian from getting a free sight on goal.

NorthEast custodian TP Rehenesh almost gifted a goal to the opposition when he misplaced a pass straight to Lallianzuala Chhangte in the 24th minute. The winger took the ball into the box and tried to side-foot it into the net but the goalkeeper made up for his error by parrying the shot away.

The game opened up as the first half wore on and the hosts went close three times at the stroke of half-time. Delhi goalkeeper Dorronsoro kept out Borges' attempts on goal twice before a curled effort by Triadis ricocheted off the post. 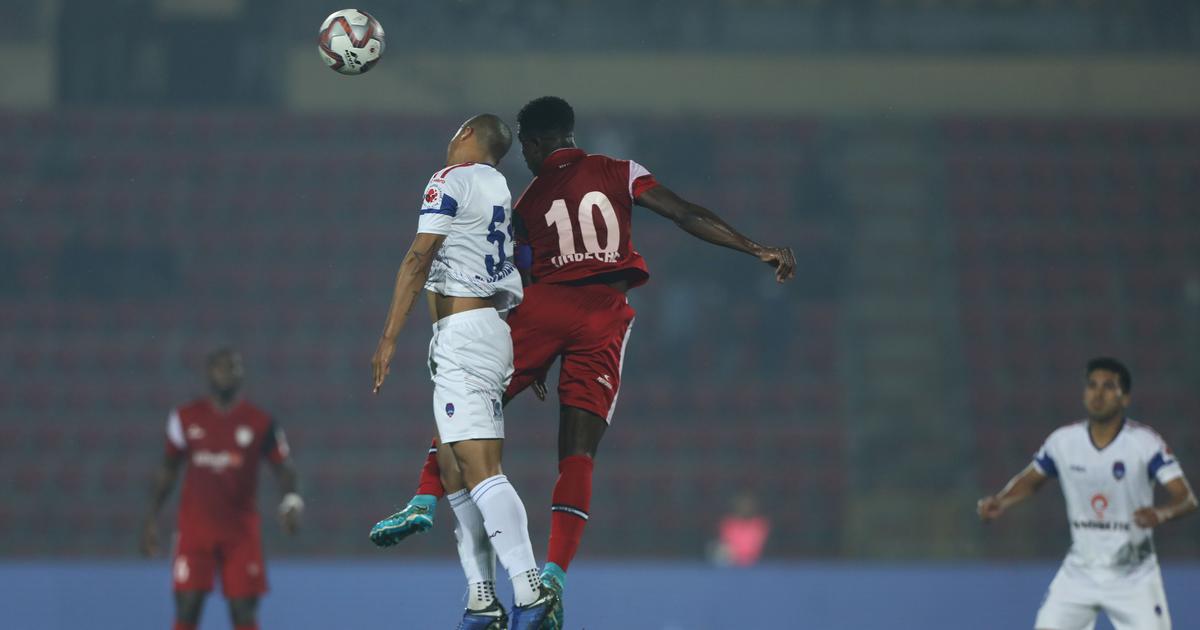 After the break, NorthEast kept probing and Ogbeche missed a glorious chance in the 49th minute. With the Delhi backline looking to push up, Robert Lalthlamuana released the Nigerian behind the defence but the striker was unable to hit the target from a one-on-one with Dorronsoro.

After holding firm at the back post the break, Delhi took the lead in the 67th minute against the run of play. Marcos Tebar started a flowing move, spread the ball wide to Nandhakumar Sekar on the right flank. The winger crossed into the box and Rehenesh could only parry it towards an onrushing Tebar who tapped it home.

The goal triggered an immediate response from the hosts. Borges fed Ogbeche into the box and he was brought down by Narayan Das and the referee awarded a penalty for the home side. Ogbeche stepped up and scored his 11th goal of the season from 12 yards, sending Dorronsoro the wrong way.