Buriram: India lost 3-1 to Curacao in the first game of the King's Cup 2019 here at the Chang Arena on Wednesday.

All the goals came in the first half. Rolieny Bonevacia and Leandro Bacuna made it 2-0 for Curacao before Sunil Chhetri got one back via a penalty for India. However the Blue Tigers conceded again as  Elson Wuincy Hooi struck the third for the Netherlands-occupied nation.

This was the first game in charge for Igor Stimac and  the Croatian handed debuts to five players- Sahal Abdul Samad, Rahul Bheke, Amarjit Singh Kiyam, Raynier Fernandes and Michael Soosairaj. Despite the loss, the coach expressed his satisfaction.

"Congratulations to Curacao team. As I said yesterday (Tuesday), they are the favourites here and they showed today in the first 45 minutes that they are a different class," said Stimac.

"They have 6-7 top quality players. They know the moves. They were fit enough because their season just finished 10 days ago in their leagues in Europe. And that was our problem in the first half. "

"Our team, we were like how the weather was. One half, the sun was shining. After we changed a few things at half-time, we started playing better. We were controlling possession much better. Especially closing the midfield down with their dangerous passes. That's what we got from two young players coming on from the bench," he further added.

The coach was critical of the team's decision in the final third, "And I think (we had) 5-6 good situations in the second half to score the second goal and maybe come back and put some pressure on them in the last 10 minutes. But our decisions in the final third were not good. When were supposed to shoot, we were passing (and vice versa). There is a long way for us to keep learning." 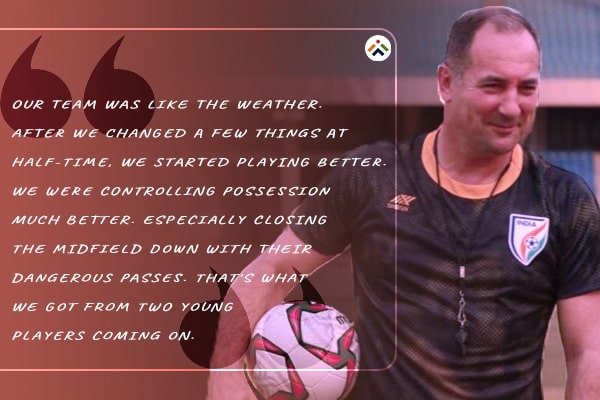 "The learning process will be long so we are going to another phase now in two week's time, getting together once again and preparing for the intercontinental cup. I hope all the players who we miss here, and there are 5-6 players who are very important for the Indian national team, will be with us fit and we are going to look much different."

Igor Stimac praised debutants Amarjit and Raynier Fernandes, "I am very proud of the achievements, especially what we showed in the second half. Especially with the younger players who have shown great character, they have no fear coming on the pitch. This is what I like, we have a good future."

"Positive for us was the second half, (where we had) two substitutions - 18-year-old Amarjit and 22-year-old Raynier Fernandes who gave us good passing and movement. Without the ball, they were covering well in front of their big striker. We never surrendered, we kept playing. We kept playing football with the discipline which I asked them to do. That was very positive," he added.

India will now face the losing side of the game between Vietnam and Thailand on 8th June.