Marco Simone, the A.C Milan Hall of Famer, was born and bred in Castellanza, Italy. He started his professional career as a striker with perennial strugglers of Serie A Como. Simone made his professional debut in January 1987 as an 18 year old. After a very dull opening campaign, Simone was sent down to the secondary Serie C1 League to play for Virescit Boccaleone. Simone had a terrific loan spell, scoring 15 goals in 33 league appearances as well as finishing the season as a top scorer at the club.

As a result of his impressive loan spell, Simone was called back into the Como first team and he was given a much better chance of proving himself to the manager and the fans. Simone scored six goals that season an impressed one and all with his movement and dribbling. His performance had turned the heads of quite a few Serie A sides as Como finished last in the league, thus getting relegated to Serie B. Arrigo Sacchi, the then manager of Milan, made a serious bid for his services and Como accepted the offer. Thus, the 20 year old Simone became an A.C Milan player, getting a huge step up from a relegated team to a potential title contender and World beater.

Marco Simone was a great option in dire situations, but he was a fringe player for most of his time in Milan

Simone was a part of a Milan era which saw legendary strikers like Marco Van Basten, George Weah, Roberto Baggio and Jean-Pierre Papin. This saw Simone playing a diminished role in the Milan lineup initially, before a breakthrough season put him in the limelight. Simone saw Milan finish 3rd and 2nd in his first two seasons at Milan with the 1991-92 season finally proving to be the charm. The 3rd placed finish in the league was mainly attributed to their European and Continental exertions and Milan dominated world football by winning the European Cup as well as the Intercontinental Cup.

Simone had only played 35 league games in his first two season at the club, but he never complained, for he was behind the great Marco Van Basten in the pecking order for a starting role. In hit third season at the club, Simone would go on to lift the Serie A title with Milan, which would start an incredible run of 4 Serie A titles in 5 years. In those 5 years, Simone would slowly come out of the shadows of the great strikers who have represented Milan and give some his best performances in the Red and Whites. While the 1992-94 were two lean seasons for Simone, with Marco scoring just 8 league goals combined in two seasons, he would nevertheless go on to lift the UEFA Champions League as well as two more Serie A titles in the meantime.

In the 1994-95 season, the 25 year old fringe player would show the world and Milan exactly what he was capable of. He replaced the injured Van Basten, who was ruled out for the season due to his knee injury, scoring 17 League goals in 30 outings along with 4 in the Champions League. But the season would end in heart-break for Simone and Milan as they lost the UEFA Champions League finals to Ajax as well as finished 4th in the Serie A race for the title. This was his best return as a Milan player, one that would change his status from a fringe player to an important part of the team.

Milan had signed George Weah as a replacement for the retiring Marco Van Basten, and he along with Roberto Baggio and Marco Simone, formed a deadly partnership up front. Simone faced intense competition to feature in the starting lineup, with Dejan Savicevic also competing for the starting spot. But Simone had a decent season, playing 27 times in the league, scoring 8 times, finishing as the clubs second highest goal scorer behind the deadly George Weah. Milan won the Serie A title again, Simone’s fourth during his time at the club as they reconsolidated their status as the dominant force in Italian football.

Arrigo Sacchi, the manager who brought Simone to Milan, also gave him his international debut with Italy in 1992. But with Gianfranco Zola and Fabrizio Ravanelli the starting strikers for Italy, Simone only ever managed four Senior caps, never scoring for Italy. His last appearance came in 1996. 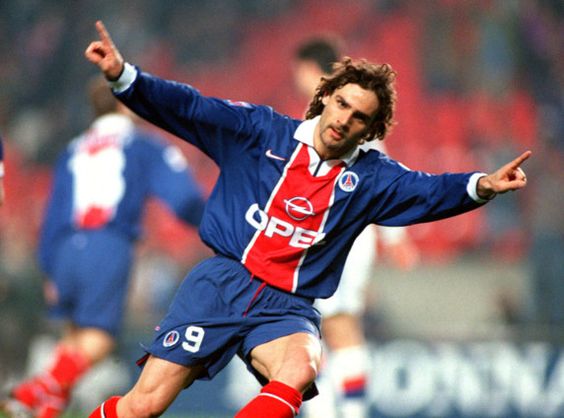 Simone won a couple of Cup competitions with PSG, but the ambition to win the Ligue 1 took him to Monaco

After another season on the fringes, a season in which he managed a decent 7 goals in 15 league games, Simone finally decided to move on from Milan, onto a new adventure. He was 29 years old, and was running out of time if he ever wanted to play as an established first choice striker in a big club. He thus decided to move to France, lining up for Paris Saint Germain in the top flight French League. PSG offered him a starring role in their side, and he did not disappoint. Simone, during his two years stay in PSG, scored 39 goals in all competitions, winning the Coupe de la Ligue and Coupe de France in his first season itself. Simone also was a great provider, assisting loads of goals.

Simone had scored 21 goals in a trophy laden first season, equalling his best goalscoring exploit at Milan in just his first season away from them. His brilliant form saw him win the Best Foreign Player in French Football award along with the Best Player of Division 1. Simone was in his prime and was performing at his peak for PSG, and the two trophies Cup won were a reward for his individual brilliance. But lack of serious silverware in both the French League as well as Europe tempted him to a move away from PSG.

Simone played his best football in France for both PSG and Monaco, winning every French trophy

In 1999, AS Monaco came calling and Simone accepted the invitation. He was still only 30, and was in the best shape of his career. He showed his worth by banging in 22 goals in his debut campaign for Monaco, assisting an astonishing 15 more. He was involved in almost one-third of all the Monaco goals that season, and was rightfully adjudged the Best Ligue 1 Foreign player of the year 1999-00 along with winning the Ligue 1 title with Monaco. He had delivered Monaco exactly what they were looking for when they signed him. Simone added the Ligue 1 title to his extremely impressive trophy cabinet which already boasted 4 Serie A titles, 2 Champions League titles, 2 European SuperCups, an Intercontinental Cup and a couple of French Cup titles.

He could not keep up his good form in the second season as his age finally started to catch up with him. Simone scored 7 times in the league for Monaco, and ended the season empty handed as the start of the Olympique Lyonnais dominance had began. By the start of the third season, rumours of a return to Italy and to his dear A.C Milan were gathering pace and he ultimately switched countries to play for Milan in the 2001-02 season. But Simone was a shadow of the player that saw him win the Best Player of the League as he could not score even a single goal in the 9 League appearances that Milan could afford him.

Simone thought that the curse of the Italian land was forcing him back, and he dramatically returned back to France and Monaco for the 2002-03 season. Simone was upbeat for the new season, but the optimism was a false hope as he failed to recapture his form, playing just 5 times and failing to score for a second season running. It was evident that his time as a top level player was coming to an end, and a ill fated move to OGC Nice only confirmed it. After going three consecutive seasons without scoring, Simone finally decided to hang up his boots.

He would return to Milan one last time, but failed to have the same impact as his age had finally caught up with him

The 35 year old had won it all, winning two different Leagues along with conquering Europe twice with Milan, and could happily rest, knowing that he even though he did not fulfil his potential in Italy, he enjoyed 4 notable season at the top of his powers, one in Milan colours and three on the French land. Simone was a loyal servant of Milan, and could have easily been their star striker, had it not been for the embarrassment of riches that Milan had up-top. But in the end, a deserved place in the A.C Milan Hall Of Fame capped off a wonderful career of a decent striker.