Willie Maley is one of the most legendary, enigmatic managers to ever have managed the legendary Scottish club, Celtic. The reason why we are mentioning him is that he had a memorable part to play in the history of Indian football. It was only because of his progressive, neoteric thinking process that Celtic got their first and till date, only Indian footballer in their squad.

Maley looked above color or creed and that gave Celtic their first Asian sensation. The year was 1936 as Mohammed Salim reached the coast of Britain along with his cousin. In Glasgow, Salim was introduced to Willie Malay by his cousin. He said, “A great player from India has come by ship. Will you please take him on a trial? But there is a slight problem. Salim plays in bare feet.”

The Celtic coach laughed at the suggestion but was awestruck once he saw Salim play during the trial. Maley was so impressed by his skill and technique that he immediately wanted to sign up Salim.

How Salim got to Glasgow

After an impressive season with Mohammedan SC, he was invited to play two matches for All India XI against the Chinese Olympic side. He was so majestic in the first match that the opponents were full of praise for him. Then the most bizarre thing happened as Mohammed Salim disappeared just before the second match.

Advertisements were placed in several newspapers asking him to return before the start of the match. IFA, who were organizing the two friendlies in India for the first time, put in a lot of effort to bring back Salim but all went in vain. As it turned out, Salim, along with his cousin Hasheem, went to Britain to try his luck in European football. Upon reaching Britain, Hasheem took him to Glasgow so that he could appear for the trial at Celtic and the rest, as they say, is all history. 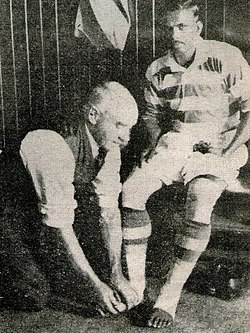 The actual trial with Celtic

After much persuasion from both Hasheem and Salim, Willie Maley finally agreed to let him pay without boots and offered him a trial. Salim then demonstrated his skills and technique in front of 1,000 Celtic members and three coaches. He was so incredible that Willie instantly decided to sign him up and made him play some friendlies.

Appearances in friendlies for Celtic

In his first match against Hamilton, Celtic impressed with their football and dominated the game to win by a 5-1 margin. He took a penalty and even managed to score one, thus becoming the first ever Indian-born footballer to play and score in European Football. It was only 63 years later that a similar feat was achieved by another Indian player. It was none other than Baichung Bhutia when he scored off a volley against Chesterfield in English Division two for Bury FC.

In the second match against Galston, the Indian winger helped Celtic clinch an emphatic win with the scoreline ending 7-1. Of the seven goals scored by the team, three of them came from moves he started.

Salim showered with praise by fans and media alike

“Well worth seeing,” that was the headline used by Scottish newspaper, The Evening Times, before Salim’s first game against the Hamilton. There was a lot of hype before the game to see the barefoot Indian winger play. 5000 people turned up for this game and Salim played along with Celtic legend Malky MacDonald.

During the second friendly, his performance was even more impressive. Salim’s popularity at Parkhead was sky high. “Give the ball to Salim” was a chant frequently used and the crowd wanted to see him play, but the Celtic players wisely did not overwork the Indian. It is said that the penalty kick that Salim took in this match was so powerful that even after getting a hand to it, the opposition goalkeeper could not stop the ball from going into the net.

A week after the friendlies, Salim left Glasgow to be on his way back to Calcutta on the ship that brought him. Willie Maley wanted to sign him for the 1936/37 season and tried his best to persuade him to stay at Celtic. The manager offered to hold a charity game in his honor with 5% of total ticket sales going to the Indian. But, Salim still wanted to leave Britain as he was homesick and was missing his family very badly.

After returning to India, he joined Mohammedan SC and helped them to clinch two back-to-back CFL titles before retiring in 1938. Salim certainly didn’t forget about Celtic FC. In 1949, he contacted The Evening Times in an attempt to secure a copy of Willie Maley’s book and again in 1960, he wrote to them. Celtic too didn’t forget Mohammed Salim. Rashid, son of Mohammed Salim, wrote to Celtic FC stating that his father was seriously ill and in need of urgent medical treatment. To Rashid’s surprise, he received a letter from the club inside which there was a bank draft for 100 pounds.

At a time when India remained under colonial rule when our own was fighting against foreign invaders for our own land, basic human rights were not a given. It was the Scottish population who showed us that with the football, we could eliminate all racial discrimination. The club gave both Salim and his cousin a proper reception and their whole-hearted support, treating them in a right manner.