All India Football Federation signed a historic MOU with KNVB, the governing body of football in The Netherlands on 24th May 2018. Mr. Kushal Das, General Secretary, AIFF and Mr. Gijs de Jong, Secretary-General, KNVB signed on the dotted lines on the MOU.

Expressing his pleasure in formalizing the relationship with KNVB which started back in 2011, Mr. Das said:

“It's great to sign a formal MOU with KNVB. Our relationship with Dutch football started way back in 2011 when Mr. Robert Baan joined us as the Technical Director. He had created
our roadmap – the Laskhya which we are still following.”

"Women's Football is something which we are looking at in a bigger way. We have already started our conversation with KNVB regarding the improvement of Indian women coaches. Moreover, we'll be grateful if someone comes here to help us excel in Women's football,”

"To be honest, we're very proud to sign such an MOU with a football federation like All India Football Federation. We have some experience on the world stage and India is a massive country with a huge talent pool. Hopefully, we can collaborate and help each other,” he maintained.

“If we both head in the right direction we can play the FIFA Women's World Cup together in the near future,” de Long added. 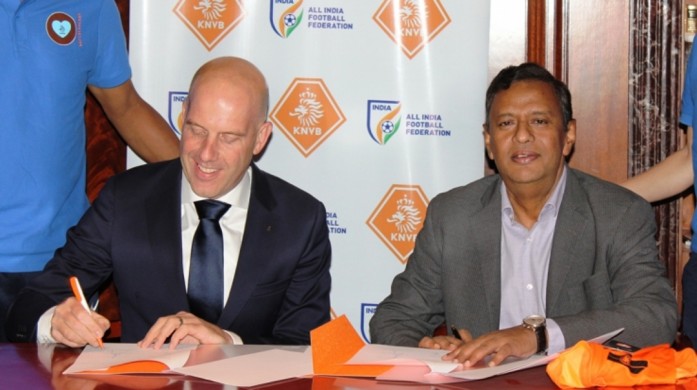 Along with KNVB, AIFF is also looking to form a partnership with German FA, whose help is very much required to establish the National Training Centre of Excellence in Rajarhat.

Earlier in the year, All India Football Federation (AIFF) received a major boost when West Bengal government passed an order to lease land for football Centre to AIFF for Re 1. The 15-acre land, leased for 90 years, which will be used in setting up a National Center of Excellence, is located at Rajarhat.

This National Training Centre of excellence will be the home of the Indian national team, junior and women’s team. It will have a permanent facility for everything – from physical training to swimming room to classrooms to mental conditioning. Every facility that you will find in top Clubs of Europe.