Part 1 - Old Trafford snooze-fest, Sarri-ball is here and Everton bottle it up again

The first game of the Premier League season saw the disgruntled Jose Mourinho take on the “funnyman” Claude Puel. Puel took banter to a whole new level in his pre-match press conference. When asked about the interest of Manchester United in Harry Maguire, this is what he had to say:

“Yes, it is true. Harry Maguire will be going to Manchester United on Friday. . . . . But only for two hours and then he will come back to Leicester”

Yes, he actually did say that. While Puel might have gotten one up over his opponents in the press conference, the same could not be said on the pitch. Paul Pogba pushed Alexis Sanchez away and stepped up to convert the penalty, while Luke Shaw kickstarted his renaissance with a beautiful, not necessarily intentionally, control of the ball and a striker’s finish past the diving Kasper Schmeichel.

Luke Shaw later revealed that the he Danish goalkeeper and son of former Manchester United legend, Peter Schmeichel, came up to him, calling him “a spawn man!”. Shaw could care less as he scored his first senior goal and proved to Mourinho why he should be starting more regularly. The game was not over yet, not for Jamie Vardy atleast. He scored an injury time goal to take his tally to 24 goals against last season’s top 6 in the last 4 years. That amounts to 40% of his top flight goals, an insane stat!

After the Friday night snooze fest, Saturday was kickstarted by 3 early goals as Rafa Benitez’s sorry Newcastle United lost 1-2 against Tottenham Hotspurs. Jan Vertonghen, scored the opener for Spurs, but equalised in double quick time. Dele Alli re-started his scoring spree, having left his scoring boots in England for the World Cup. His header was the last meaningful attack by Tottenham as Newcastle lay seize on Hugo Lloris’s goal for the rest of the game. Rondon and Mo Diame came so close to finding the equalizer, hitting the upright and the bar. In the end, Spurs held on to scrap through an unconvincing victory, with a lot of work yet to be done by Pochettino and his tired soldiers. 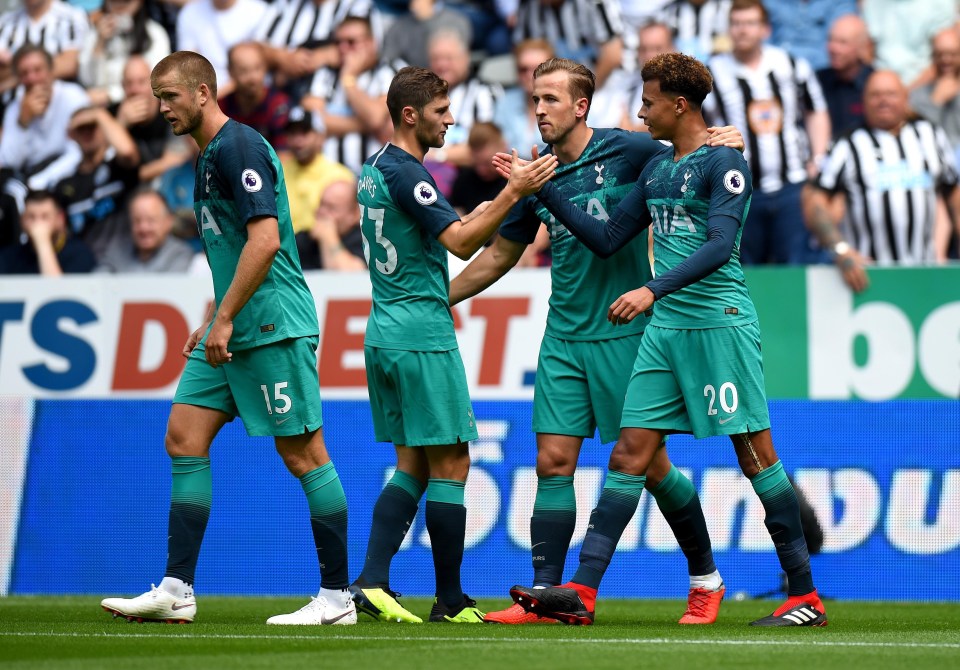 The afternoon kick-off saw two newly promoted sides, Cardiff City and Fulham take on AFC Bournemouth and Crystal Palace respectively. While Cardiff and their long ball strategy rarely threatened Bournemouth, who registered a comfortable 2-0 victory, the story was a little different in the other game. Fulham had become the first club in Premier League history to spend more than £100M in the first transfer window after promotion. But their Serbian manager, Slaviša Jokanovi? could not build the cohesion quickly enough for the first game.

Crystal Palace were very impressive in their 2-0 victory over Fulham, with Jeffrey Schlupp scoring a brilliant goal, while Zaha, who does not know score ordinary ones, adding the second. Roy Hodgson’s men couldn’t have dreamt for a better start, especially after Fulham naming Jean Michel Seri, Andre Schurrle, Aleksandar Mitrovic and Ryan Sessegnon in a strong starting lineup. The lack of cohesion between the front three and the newness of a lot of players led to a anti-climatic start, but expect Fulham to bounce back stronger against a vary Tottenham Hotspurs next week. 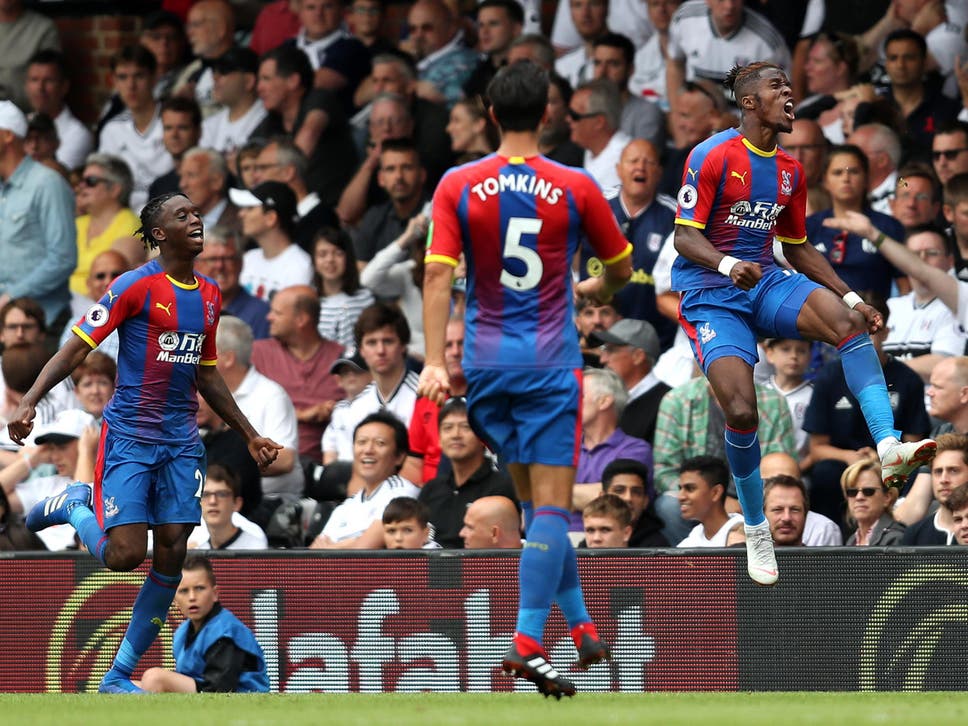 Vicarage Road saw a Roberto Pereyra masterclass as a training ground routine from the corner kick and a solo wonder goal saw Watford beat Brighton & Hove Albion and ease the pressure off Javi Gracia due to a lack of activity in the summer transfer window. Pereyra’s first goal, a brilliant volley from outside the 18-yard box and directly from a corner kick was a thing of beauty. His second goal was more finesse and flair, taking on three defenders and slotting past the hapless Matt Ryan.

The biggest game of the afternoon kick-off though, was Chelsea against Huddersfield. It was Chelsea’s first competitive game under Maurizio Sarri.And boy didn’t they deliver. Chelsea put on a show for their travelling fans, with Jorginho and Marcos Alonso catching the eye with shining performances. Jorginho was the chief orchestrator in the middle of the pass, spraying threatening and meaningful passes while Marcos Alonso would be kicking himself for not getting on the score-sheet.

The first goal came about from one of the most unlikeliest of sources. The move started off with Antonio Rudiger winning the goal-kick from Ben Hamer and Pedro beating Aaron Mooy to the second ball. Pedro then made a 20 yard burst and fed Willian of the left wing. Willian easily by-passed the Huddersfield defender Florent Hadergjonaj, delivering a back post cross which was  finished off by N’Golo Kante to score the first Premier League under Maurizio Sarri. It was a move which showcased the desire of Chelsea to get on the ball and fight for it, and their resolve paid off.

The second goal was created by a clever little back heel by the forgotten man, Ross Barkley. Barkley, with his back against the goal, received the ball from Jorginho, and instead of taking a touch to get it under control, he redirected it onto the path of the on-rushing Marcos Alonso. Alonso took a slightly heavy first touch to open his body up to curl the ball into the top right corner, but his forthcoming second touch and shot was impeded by Christopher Schindler. The referee did not hesitate for a second and pointed to the spot. Jorginho stepped up for the penalty and converted it expertly to put Chelsea 2-0 up and in cruise control.

The third goal was all about the genius of Eden Hazard. On the counter, Hazard ran through the middle of Huddersfield defense, attracting three defenders to him. This freed up Pedro on the right hand side, who expertly dinked the ball above the on-rushing keeper. That was the last meaningful attack of the game as Maurizio Sarri made an impressive start to his Premier League career. One notable debut from this game was that of Kepa Arrizabalaga. The former Basque goalkeeper did well whenever called upon, making 2 important saves and keeping it calm at the back when playing with his foot. It was an assured display, one which would give Sarri a lot of confidence ahead of the showdown with Arsenal.

The final game of the day saw Everton take on the Championship winners Wolves. It was the first game for Marco Silva at Everton and he started with a fairly similar team to last season, with Rcharlison making his Everton debut and Seamus Coleman coming back from the horrific injury. It all looked well and good when Richarlison converted from point blank range to give Everton the lead. But a horrific challenge from Phil Jagielka, and the subsequent red card where the beginning of Silva’s troubles. Coupled with that, Ruben Neves scored a delightful free-kick to level the scores up just before half-time. 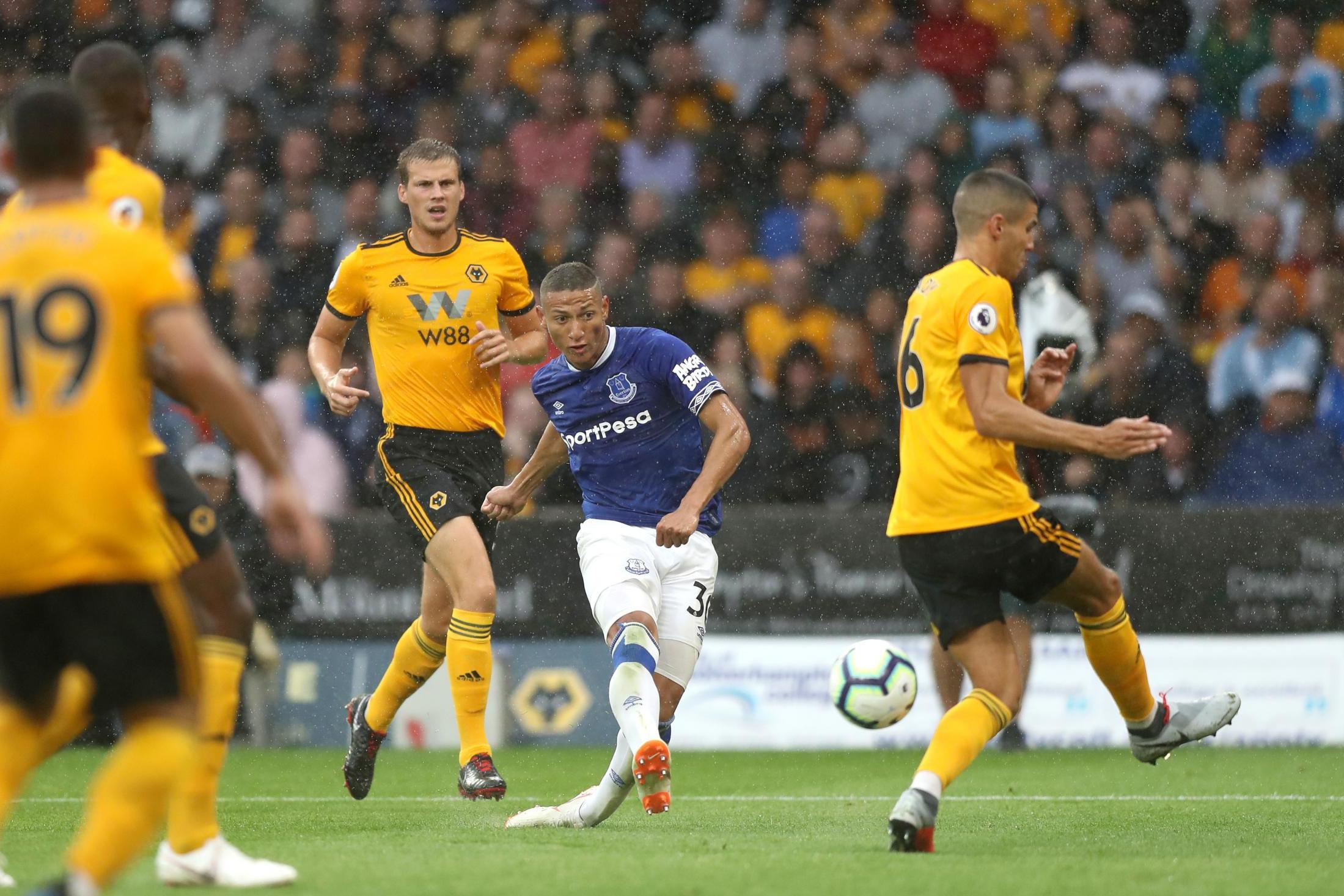 In the second half, Wolves came out all guns blazing and attacked Pickford’s goal. This made Richarlison’s second goal all the more surprising and against the run of play. It was a beautiful finish by the Brazilian who opened up his body and curled it across Coady’s body. There was nothing Rui Patricio could have done about that goal. After going behind, Wolves were reinvigorated and fought hard to get back in the game. Their efforts did pay off in the end, with Mexican International Raul Jimenez scoring his debut goal for Wolves and finishing the match 2-2, a result which neither managers would be happy with, but neither would dare to complain after the game they saw from their players.

The second part of this analysis is also out now. Go to the indifoot app and navigate to Blogs to read it now. You can also find it here.