Sunday afternoon kick-off saw Liverpool take on a refreshed West Ham United, while Southampton took on Burnley. For Jurgen Klopp, it was an important test of quality, temperament and an outlook of the things to come this season, with Liverpool favourites to challenge Pep Guardiola for the Premier League title. The game did not disappoint, with quality team goals and moment of individual brilliance. Sadio Mane was the star of the show, scoring two goals, including a beautiful team goal assisted by Bobby (Roberto Firmino). But the scoring fest was kick-started by none other than their Egyptian king, Mo Salah.

Salah finished off a sweeping move which saw Naby Keita drive through the middle of the park and draw defenders onto him. This freed up Andrew Robertson on the left hand side, whose cross did not disappoint, as Mo Salah swept the ball home. The goal would have rolled back the years for Liverpool faithfuls, with Naby Keita’s driving run reminding them of a certain Stevie G. Mane scored two goals either side of Half time, with Daniel Sturridge adding gloss to the scoreline 20 seconds after coming on. HIs header from the corner summed up the day for Manuel Pellegrini’s West Ham, who were thoroughly outclassed.

Pellegrini will now have to go back to the drawing board and figure out a way to play Michael Antonio, Jack Wilshere, Felipe Anderson and Marko Arnautovic in the same team. The other game, Southampton vs Burnley was a dull 0-0 draw, with Burnley threatening early in the game. But it was Southampton who had the best chances of the game, with Mario Lemina and Dale Stephens calling newly signed Burnley goalkeeper Joe Hart into action. Ben Mee almost scored an own goal from a Southampton corner, but Chris Wood bailed his team out of the tight spot.

The final game of Week 1 saw defending champions Manchester City take on an Arsenal side without Arsene Wenger for the first time in 21 years. City, who were without David Silva and Vincent Kompany, made a bright start to the game, with the early pressure ultimately culminating in a goal. It was Raheem Sterling who scored a wonderful goal, cutting in from the left hand side and finishing it through a crowd of Arsenal defenders, past Petr Cech. His celebrations after the goal were another talking point, calling for his detractors and skeptics to shut up and watch them play.

Arsenal started putting pressure in front of their home crowd, but lack of cohesion between the front three, and Ramsey’s rustiness coming from a small niggle meant Ederson was rarely threatened. This forced him to take matters in his own hand as he made two or three terrible passes, but Lacazette and Ozil failed to make the most of the chances. This was after Bernardo Silva had put City two to the good, finishing off a sweeping counter-attacking move, with Mendy registering his second assist of the game. 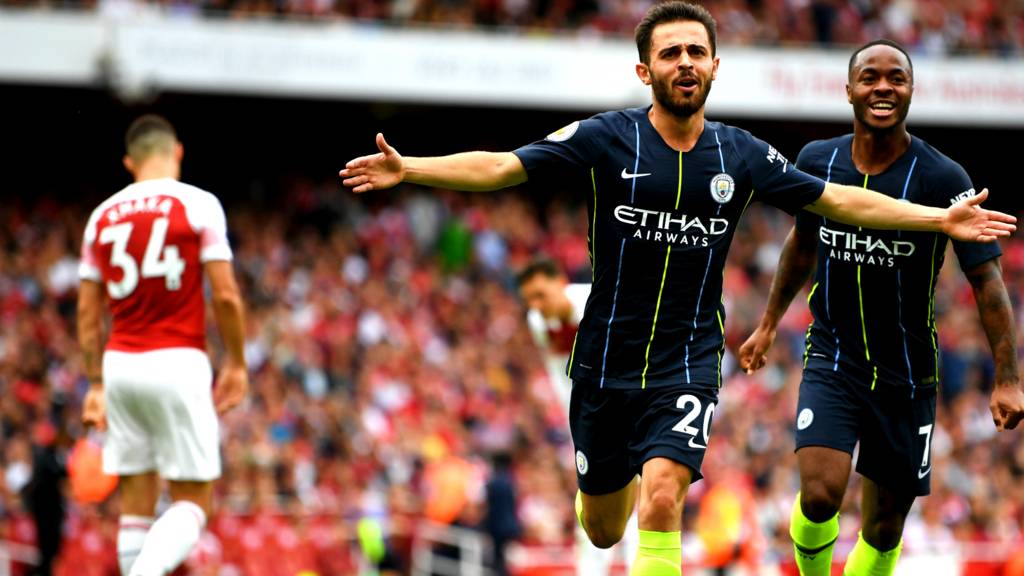 It was a tough start to the season for Unai Emery, but they played well as a defensive unit and it was the attackers who let them down. Lucas Torreira made his Premier League debut off the bench and looked extremely lively. For City, Riyad Mahrez started on the wings and constantly threatened Ainsley Maitland Niles and later, Stephan Lichsteiner. Guardiola’s decision to drop Sane to the bench looked baffling before the game, but it ultimately paid off, as City started their title defense in convincing style, while Unai Emery still has a lot of work to do if he wants to see his Arsenal side finish in the top 4.