The deftest of touches

The world was introduced to yet another prodigious talent of the famed Ajax academy, Patrick Kluivert, on the night of 21st August, 1994, in a packed Olympisch Stadion in Amsterdam. Ajax took on their fierce rivals Feyenoord in the Dutch Cup finals. Louis Van Gaal, their then coach, decided to start an 18 year old Patrick Kluivert upfront. When asked about his confidence in him, this is what he had to say:

"They (PSV Eindhoven) have Ronaldo, we have Kluivert”

Ajax had previously tried to sign Ronaldo from the past two seasons, but they couldn’t get his elusive signature. When the news of Ronaldo signing for PSV broke out, Van Gaal dipped into his youth team and plucked out Kluivert.

Kluivert had been a part of the Ajax youth team from a very young age, joining from Schellingwoude at the age of seven. Kluivert claimed to have learnt football by playing in the streets right from a very young age. The red court of Naardermeerstraat was the spot used by the him and other kids, including one Edgar Davids, to run away from school and play football. Kluivert scored loads of goals for Schellingwoude, which led to Tonny Bruins scouting him for the famed Ajax Youth academy.

He had represented both Ajax and the Dutch International side at every Youth level till the age of 18 before making his club debut. Suddenly Kluivert was part of a team consisting of Danny Blind, Frank Rijkaard, Edwin van der saar and the De Boer twins, along with young talents like Marc Overmans, Clarence Seedorf and Edgar Davids. 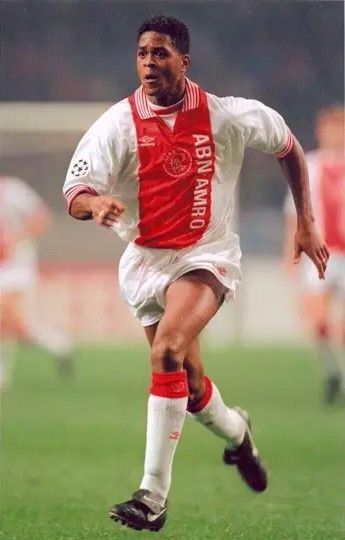 After the Dutch Cup heroics, Kluivert competed with Kanu and Ronald De Boer the following season for the strikers position. 25 games and 18 goals later, he had justified his managers faith in him and become the highest scorer for Ajax and the second highest in the league, only behind Ronaldo’s 30 goals, to romp to the Eredivise title without losing a single match. But there was more to come from this promising youngster. Kluivert, in the 85th minute, after coming off the bench, guided the ball into the back of the net to score the winner and help Ajax to the UEFA Champions League crown against A.C Milan, becoming the youngest scorer in a Champions League finals in the process.

With that goal, Kluivert had announced his talent to the whole of Europe. Also, the recent goal celebration by Messi, in which he removed his shirt and held it such that people could read his name, was inspired by the goal celebration by Kluivert in the finals in Vienna. Kluivert was named the Dutch talent of the year as well as the European player of the year for the Under 21 category, capping off a fine debut season.

The Dutch international side came calling, as Kluivert made his International debut on November 16, 1994 in a European qualifiers against the Czech Republic. He scored his first international goal in his second match, against Malta, coming on a substitute for Ronald De Boer.

Kluivert continued his scoring prowess by again becoming the top scorer for Ajax, scoring 15 goals in 28 league appearance. This was also the season in which he won 5 trophies with Ajax, winning the Dutch Super Cup, the UEFA Super cup and the Intercontinental cup, along with the Dutch Eredivise title and the Dutch Cup, as Ajax was deemed as the greatest football club on the planet. Ajax narrowly missed out on retaining the Champions League though, losing in the penalty shootout as Kluivert missed the match due to a knee injury.

The loss turned out to be the start of the end of Ajax dominance as well as Kluivert’s Ajax career as he was marred with off the field controversies. It all started with a traffic accident resulting in the death of a person. the Dutch media started turning against Kluivert and a rape accusation resulted in him becoming the Dutch Media’s scapegoat. Kluivert’s form dipped as he fell out of favour and started very few matches.

Ajax, meanwhile, had a horrific season as they finished 4th in the Eredivise and ended the season without any trophies. With the media thoroughly against their once boy wonder, Kluivert decided to move on from Ajax and Netherlands on a Bosman transfer to start fresh. 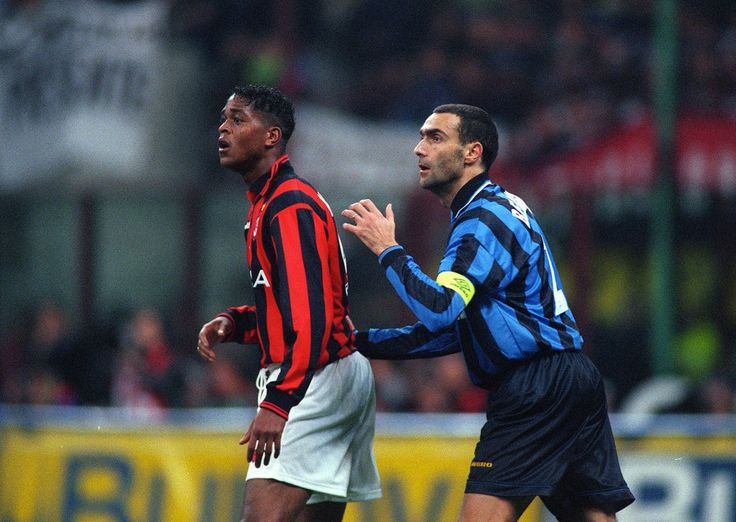 Kluivert had a bridge year at Milan which turned out to be his stepping stone.

Things didn’t get better in Milan as they too were having a fall from grace kind of season, which ultimately resulted in them finishing 10th. Capello was fired and a major backroom reshuffle resulted in improved faith in Kluivert. But in a major twist of events, Kluivert reunited with former boss Louis Van Gaal and joined FC Barcelona on the transfer deadline day for 15 million euros.

Kluivert and Barcelona turned out to be a happy marriage as he formed a brilliant partnership with Rivaldo, banging in goals and assists season after season, but most importantly, staying out of media and off field controversies, concentrating solely on his footballing prowess. His first season ended with 16 goals and 16 assists as Barcelona successfully defended the La Liga title. Things started going downhill from here for the club as Barcelona finished second, fourth and fourth in the next three seasons. Kluivert though, went from strength to strength, scoring 22 goals in all competitions in his second season at the club, which included seven goals on his return to the Champions League after two years.

Kluivert reached his greatest goal tally in the third season, scoring 25 goals, with 18 of those goals coming in the La Liga. But due to the departure of Luis Figo and the appointment of a more defensive minded manager, Barcelona finished fourth. Kluivert again scored 25 goals in all competitions the following season and Barcelona again finished fourth in La Liga, getting knocked out by Real Madrid in the semifinals of the Champions League in the process.

The new season saw Kluivert reunited for the third time with Louis van Gaal, as he was reappointed by Barcelona to dig them out of this crisis. But things went completely downwards for Barca as they finished 6th in the league and lost out to Juventus in the Quarter finals of the Champions League. Remarkably, Kluivert still scored 20+ goals in all competition, banging in 16 goals in La Liga. The highlight of the season was a breathtaking performance against Real Mallorca. Marred with racist chants against him, Kluivert turned in an exceptional performance, scoring a hattrick, which included a memorable solo effort from distance. Van Gaal was fired and Frank Rijkaard was appointed as the new head coach in the 6th season of Kluivert at Barcelona.

A boardroom reshuffle lead to heavy investments as Ronaldinho was bought, resulting in Kluivert surprisingly moving down the pecking order. Rijkaard was not convinced by kluivert’s abilities and his high wages was a hindrance for the board. This resulted in a season along the sidelines for Kluivert as he started only 11 times, making a substitute appearance a further 10 times.

A serious knee injury kept Kluivert out for months, which coincided wth an upturn in fortunes for Barcelona, resulting in him being sparsely used after returning. Kluivert was ultimately transfer listed, even though he had accepted a major cut in his payroll, with Newcastle United snapping him up for free. 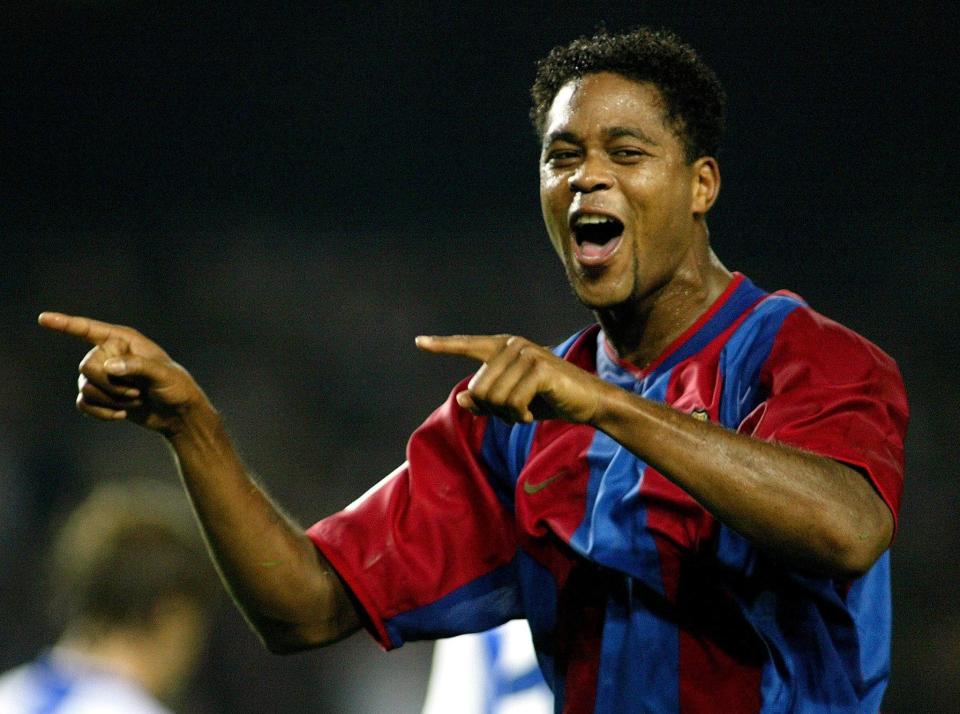 Kluivert celebrates after scoring for Barcelona

Kluivert’s International career was filled with heartaches as the Oranjes reached the semifinals of the 1996, 2000 and 2004 UEFA Euros as well as the 1998 FIFA World Cup. The standout performance from Kluivert came in the quarterfinals of the UEFA Euro 2000 against Yugoslavia, where he scored a hattrick to guide the Dutch into the Semifinals.

The appointment of Marco Van Basten as head coach in 2004 lead to the development of a rift between him and the coach. He was not called up to the team after the 2004 UEFA Euros, in which he did not play even a single minute, with Van Basten also preferring to give youngsters an opportunity in the first team. Kluivert refused to retire from the International team but he never again played for the Oranjes.

At 28, Kluivert was supposed to be at his peak , but the knee injury badly restricted his movement. Also, he found it difficult to adjust to the rough Premiership, injuring himself many times over the course of the season, which never truly began. This led to him becoming a short stinted player, playing for Valencia, PSV and Lille in the next three years, ultimately hanging up his boots in 2008 at the age of 32.

Kluivert was one of the best players to come out of the famed Ajax youth academy and he reflected everything that was good about the golden generation at Ajax. He scored 193 goals, making 447 appearances in total, with more than 100 of those goals coming for Barcelona. A true legend and one of the best strikers of his time, Kluivert was a player who could immediately improve the team by just walking onto the pitch with them.

Now 40, and the current Director of football at PSG, Kluivert has achieved great things in his career, winning a lot of individual and team honours, with the highlight being finishing third at the 2014 World Cup as the Assistant Manager of the Netherlands and winning five trophies in a season along with the accolade of the greatest player in Europe under 21. A celebrated footballer with a rich and trophy laden career, who is now giving back to football by working behind the scenes for the betterment of the sport.