When Paul Pogba was bought to Manchester united for almost 90M A record transfer fees spent by an English Club and still the second biggest fee involving an English club ever much was expected of him returning to the club where he made his senior debut with a significant reputation built in Seria A while winning titles in four consecutive seasons with Juventus Pogba was expect to do more than just play football well. United was in need of a creative force to break the shackles of the dull football of the Ferguson Era.

Pogba with his eye for a pass, his ability to grab a game and wrestle it from the opposition single-handedly and his charismatic presence on and off the pitch was symbolic of United’s new era.

To read or listen to comments and punditry on Pogba though on would be forgiven for thinking the Frenchman has failed.

Has Jose Mourinho got the best from one of the world’s great midfielders or has he let pogba and united down with the way he has played him?

United have tried out the following three formations with Pogba this season: 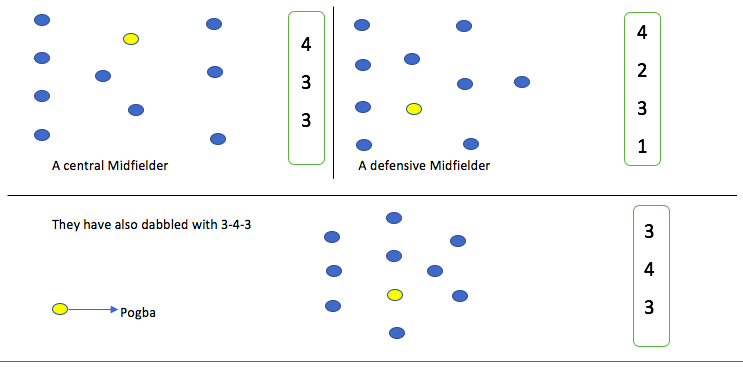 Pogba has played 3 roles within these three positions as a LCM in 4-3-3, a RCDM IN 4-2-3-1 and a RCM in 3-4-3. His roles are different in all the three formation. Playing deeper in the pivot with Nemanja Matic, Pogba has defensive responsibilities and is expected to create from further back with long range passing to wide spaces or directly and vertically to Romelu Lukaku. Lukaku can then burst forward or just pass it on to a winger or attacking Midfielder.

He is far from a pure anchoring player. He gets forward as well with less flair and dynamism that Pogba but has a good range of passing that can leave United with two playmakers both of whom are strong but not pure defensive midfielders. If Pogba pushes up forward toward the attack In 4-2-3-1, Matic can be left isolated especially as united fullbacks push up high and with without Eric Bailly united struggle in the defense.

Pogba has a greater attacking role and is more tempted to attack in the 4-3-3 formation as it still leaves a double pivot in the midfield with both Matic and Herrera playing box-to-box. Also Pogba gets to push forward, in position which a traditional No. 10 occupies.

United's 4-3-3 sees the wide men cutting inside as they can do so without congesting the space in-front of the box and this is where Pogba is able to burst forward either delivering a pass or as against Manchester City provide a goal threat. If one sees Pogba is best in the central role but more forward role covered by two other midfielders and able to create and drive forwards.

Looking at Pogba’s metric, Pogba has had a productive year compared to his other seasons. 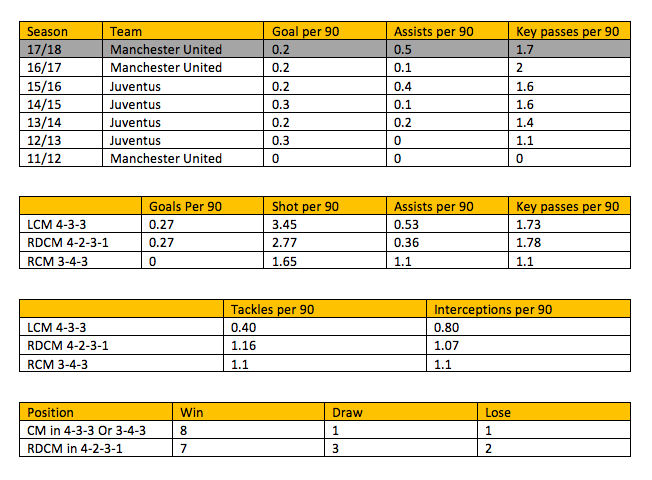 Looking at the tables United derive more from him in a role where he has more license to push forwards being covered. Clearly the 4-3-3 is better option with Scott McTominay or Herrera working with Matic and Pogba, Jose Mourinho should be using it more often. The question is less about where pogba is best and more about what pogba can do that others in the united squad cannot.

The 4-3-3 allows he to get forwards create, shoot and score and also provide a dynamism that no one else in United squad can provide from Midfield. He’s the sort of player that one can construct a team around and Jose.M should consider this when working on his summer transfer list. Pogba should be free to grab games and run. Jose Mourinhoneeds to work out a way how best to let him to this. If he dosen’t pogba’s talent is stifled and is failing to get the best out of the best players.