Revealed! How AS Roma dumped FC Barcelona out of the Champions League

The crowd were jumping and enjoying, their chants deafening as they buoyed their team on to an incredible result in Rome. Stadio Olimpico turned into a fortress, one which unleashed 11 wolves who held Messi and co hostage. The mighty Barcelona, a team which dominates statistics against any team in the world, registered half the number of shots AS Roma had on Ter Stegen’s goal. Roma layer siege on Der Stegen’s goal, with 16 attempts out of which 7 were on target, with 3 of them going in.

In the first leg, Lionel Messi himself had 7 shots on goal, a clear testimony of how poor FC Barcelona were in the second leg. But, this night was not about the incompetency of FC Barcelona, it was about the rear-guard, hell-breaking action of AS Roma, whose coach Di Francesco master-minded the win over Ernesto Valverde. In the end it was a Di Francesco, who won against Ernesto Valverde more than Roma winning against FC Barcelona, with this tactical masterclass and brilliant tweak in formation helping Roma complete Mission Impossible. 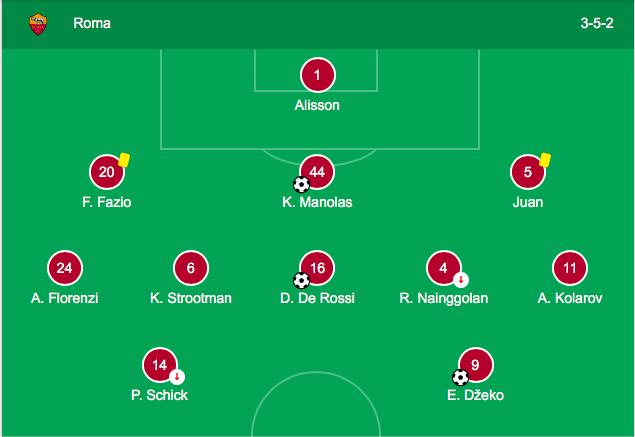 Di Francesco decided to start with a back 3 in what was a free-hit for him. If AS Roma lost the tie, they would have been dumped out by a team home to Messi, Suarez and Iniesta. If they managed to win the tie but go out on aggregate, it would have spurred them on in the battle for top 4 and Champions League spot in Serie A. A win over 2 legs was not talked about a lot before the game, which is why when Roma put out their team-sheet on twitter an hour or so before the game, it felt like a defensive side looking to damage limitation.

But Di Francesco had other thoughts. He had a clear plan and he had marshalled his troops with specific jobs. The gaffer knew that FC Barcelona will most likely start with two strikers, and he had thus decided to shore up his central defense to hope that they can nullify the threat of the genius Messi and a somewhat out-of-form Suarez. The responsibility was given to Manolas to Marshall the defense and work with Fazio and Jesus to neutralize the threat of Suarez and Messi. Manolas did not put a foot wrong all game, with 0 fouls against the mghty Barcelona being an astonishing achievement.

This tactic worked like a charm, with a tame Messi effort in the 73rd minute, trailing 2-0, being his only chance of note. Strootman and De Rossi worked tirelessly in the midfield engine room to shield the back 3, ganging up on Messi like wolves, hunting in pact to keep the LION-el Messi quiet. Suarez, meanwhile, once again got lost on a Champions League night, a common happenings in the near past. Thus, the central attacking threats were brilliantly nullified.

AS Roma converted their stadium into an impregnable fortress, echoing the support for their warriors

Daniele De Rossi was particularly exceptional, with the 34 year old laying on the assist for Edin Dzeko’s brilliant control and finish. He then converted from the spot to put Roma within sniffing distance of turning the tie around, converting a penalty earned by Dzeko, who harassed Pique and Umtiti all night. Meanwhile, Alessandro Florenzi and a rejuvenated Kolarov played out of their socks to ensure Roberto and Iniesta on the flanks did not see any joy on the ball.

Florenzi kept Iniesta in his pocket all day, with his marauding runs going untracked by the Barcelona veteran as well. He created two keys chances, one of which brought our a terrific save from Ter Stegen on the line. Florenzi is back at his brilliant best for Roma, and Di Francesco brought the best out of him by playing him as a wing-back and giving him the license to run up and down the by-line.

Di Francesco though, put a lot of weight on the shoulders of Radja Nainggolan. He was chosen to be the link between defense and attack, as he was tasked with carrying the ball forward as well as putting in those crunching tackles to snuff out Barcelona attacks in their early stages. And boy, did he play well! Nainggolan defended like his life was on the line, and attacked like it was the end of the world.

He might not have a lot of statistics to show for his performance, but he was one of their best player on the field. His strength on the ball and hassling off it neutralised the role of his counter-part, Ivan Rakitic. Just in front of him, the young Patrik Schick worked welling tandem with their star player, Edin Dzeko. Dzeko has been a rejuvenated man since joining Rome from City, scoring tons of goals and becoming one of the best centre-forward in the country.

And he showed why he was the difference maker in the tie. He was responsible for 3 out of the 4 goals that Roma scored, with a crucial goal at Camp Nou setting up the comeback in Rome. He took his first goal with some class, out-running Jordi Alba, one of the quickest player at Barca, and holding off the timid attempt of Umtiti to put the ball into the back of the net. Not just in the goal, Dzeko had the number of Pique and Umtiti all day, while Fazio, Manolas and Jesus kept Messi and Suarez quiet.

The penalty once again highlighted his strength and ability to shield the ball, putting his body in between the ball and Pique to force him into making a rash decision and tackling him into the ground.

The relatively young defense of Roma stepped up big time, while the experience of Umtiti and Pique let them down. But this game was all about one man, Eusebio Di Francesco. The man pin-pointed the weakness of every Barcelona player and took advantage of it brilliantly to treat Roma fans with one of the greatest, if not the greatest, night in Rome.