Reviewing Bengaluru FC vs Gokulam Kerala - So close, yet so far Bengaluru FC were second best for half of the game, but the abundance of quality that they had in their starting lineup showed as Udanta Singh and Miku, two of the many stars of the club combined to break Kerala hearts and win it very very late. The quality of the goals and the build up to them were exquisite, with Bengaluru proving why they are known as arguably the most attractive team in the country.

Gokulam Kerala were rugged, they defended resolutely, always looked a threat in transition, but somehow managed to come out of the game with a defeat and a ticket back home. Henry Kisseka put in a brilliant shift to hassle Johnson and Juanan, with his physical presence in and around the box always causing problems.

The Bengaluru defenders had a poor first half and it showed right from kickoff, with Suhair unlucky to not earn his side a penalty after being tackled to the ground by Johnson inside the box. The first chance of the match though, fell to the Bengaluru FC captain Sunil Chhetri. His terrific run behind the defense was expertly spotted by the central defender Johnson.

Chhetri’s first touch was also exquisite, bringing the ball under his control and setting it up to bend it into the top right corner. But Barnard, the Gokulam keeper anticipated the shot and flew to his left to deny Sunil. What made the save even more impressive was the fact that he was 15 yards off his line. The resulting corner again fell Kindly to Chhetri, but his shot on target was cleared off the line by Rashid, again denying the Bengaluru captain. 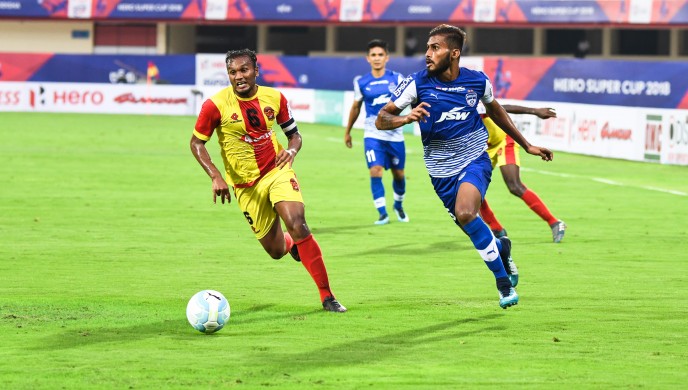 In the 32nd minute though, Gokulam Kerala showed some exquisite build up play to score the opener of the game. Denkovski picked the ball up on theft hand side and bypassed two Bengaluru players to pass it to Musa. Must took a touch and scooped the ball above the Bengaluru defence with Kisseka, who was occupying the hole just behind Johnson, running onto it and finishing coolly past Gurpreet Singh Sandhu to make it 1-0 for the i-League side.

Bengaluru began pressing Kerala’s goal more and in the 42nd minute, Sunil Chhetri was again sent through on goal with a delightful through ball. But he hesitated for just a fraction by taking an extra touch, which was enough for Emmanuel to track back and put in a last ditch challenge to take the ball away from Chhetri. That was the last chance of a frustrating first half for the Indian captain, with nothing going his or Bengaluru’s way.

Bengaluru began the second with a renewed determination and they came close to equalising, with a delightful back heel from Miku finding Subhasish, whose low shot came back off the far post and away to safety. The left-back was terribly unlucky to not be on the scoresheet, but he would now rue the missed chance for long.

Rahul Bheke lifted the ball behind the Gokulam defense, with the flying Udanta putting on the after-burners and giving it a chase, reaching there and taking an important first touch to tease the opposition goalkeeper to come for the ball. He then selflessly cut it back for the on rushing Miku to place it between Daniel Addo and Emmanuel to equalise for Bengaluru. It was a delightful goal, with the through ball and the cut back equally wonderful. And just like that, Bengaluru were back in the game, with 69 minutes of resolute defending all down the drain. Gokulam Kerala were undone by the pace and combination of Udanta and Miku. In the 75th minute, Miku, after seeing Barnard off the line, chipped over him and started to reel off to celebrate, but Emmanuel rushed back to make the second important block, sending the ball just wide off the post with an on the line clearance. When the board went up for 5 minutes of added time, things started to get out of control, with the game becoming increasingly stretched. First, Udanta came close to connecting with a header from a Subhasish cross. On the other end, Kisseka managed to somehow miss the ball completely from a pin point right field low cross.

In the 94th minute though, Miku was sent through on goal because of a mistake by the Kerala defence. He dribbled to till the penalty spot and seeing Udanta in acres of space, passed it to him for a simple tap in. And just like that, Bengaluru had completed their big comeback, shooting down a spirited Gokulam Kerala and moving into the quarterfinals of the competition. It was a match of high quality, one which saw the Indian captain squander a lot of chances while the young Udanta made another lasting impression.

Albert Roca: “We knew it would be difficult to restart after the break. It is not about the attitude but it is human nature to relax during a break. Second half was much better as they were a little bit tired and we took the opportunities. We have to get better for the next game. I think we had two or three chances before they scored. But when the other team scores, you have to be really good only to get back into the game. The players understood that they need to more aggressive and they played better.

Everybody thinks that we have a good team but it is a long road. We have a good academy to keep the good flow of footballers. We have a built a good image and now it our responsibility to keep up the good work. Chennaiyin's loss was surely a wake-up call. We got a good result that we wanted and now we just have to look forward and move ahead.” 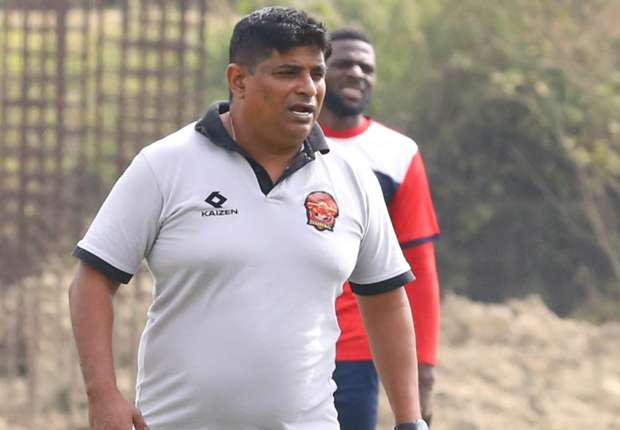 Bino George: "Injuries cost us the game. When Daniel Addo went out it became very difficult for us. We hope that we gave a good fight to Bengaluru FC, the best team in India. They are more experienced and they have more budget also. But my boys played well. But with Kerala winning the Santosh trophy and two teams from Kerala I think the golden days of Kerala football will be back.

The club management have asked me to shift to the role of a technical director and a Spanish coach will take over from me. But, I will be looking at the overall development of the club.”