Kathmandu: India continued their dominance at the SAFF Women’s Championship, lifting their fifth straight title on with a 3-1 win over the hosts in the final here today. The win extended India’s unbeaten run in the tournament’s history to 23 games.

Goals from Dalima Chhibber, Grace Dangmei and substitute Anju Tamang saw India lift the trophy in front of the home crowd at the Sahid Rangashala Stadium. The pace of the match was intense right from the beginning with both sides pressing hard. Dangmei fashioned a couple of early chances down the right wing for India while Nepal registered a couple of shots from distance, with Manjali Kumar testing Indian custodian Aditi Chauhan in the 14th minute.

Just three minutes later, after some excellent build-up play down the right, Sandhiya laid off a ball for Sanju to shoot from the top of the box. The winger’s effort was a powerful one but was saved by the opposition keeper. On the other end, Sabitra Bhandari posed a threat for India inside the penalty area but her curling effort was off target.

In the 26th minute,Dalima Chhiber gave India the lead as she smashed the ball past the keeper from a free-kick from 30 yards with a powerful drive and put the defending champions into a 1-0 lead. Ratanbala Devi could have added a second goal six minutes later but her shot from distance was saved by the Nepal goalie.

In the 34th minute though, Sabitra equalized for the hosts as she rose high above her marker and headed the ball into the back of the net. The break saw both sides go locked at a goal apiece but it could have easily been either team with the lead. Grace failed to connect well with a cross from Sanju down the left in the 41st minute and Aditi made a brilliant double save to deny Sabitra in first half stoppage time.

The second half began with India creating the majority of the opportunities, with Sanju and Ratanbala putting their respective efforts just over the bar. Nepal were under the cosh and India’s pressure paid off in the 63rd minute after Sanju put Grace through on goal with a through ball.

The winger swiftly broke through and showing great composure, she rounded the goalkeeper and slotted the ball home to restore India’s advantage. It proved to be the straw that broke the camel’s back as the away side continued to keep the Nepal side at bay and almost added another as Ratanbala’s shot was spilled by the keeper.

Head Coach Maymol Rocky brought on Anju Tamang in place of Sandhiya midway through the second half at the top of the pitch and in the 78th minute, the move paid rich dividends as she slammed the ball on the volley for India’s third after a crafty first-time assist from Indumathi Kathiresan. 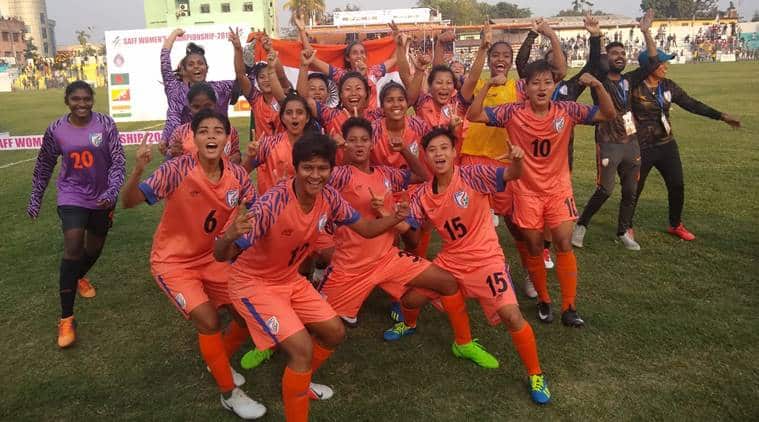 Towards the end, hosts tried hard to break the Indian defence but the visitors stood firm. Sabitra and Renuka Nagarkote threatened to halve the deficit but could not get past Aditi in goal as India romped to a fifth SAFF trophy in a row.