Fifa World Cup is currently the hottest topic everywhere these days. People are going berserk over the game, enthusiasm and the craze for the game, seems to have gripped the Nation and fans are leaving no stone unturned to show their passion for their favourite teams in the World Cup. It is safe to say, India is completely obsessed with the beautiful Game.

Sony Pictures Networks, which holds the media rights for the ongoing FIFA World Cup in Russia, has revealed that around 4.7 Crore viewers tuned into their network in the first 48 hours, in India. The broadcaster further added that the mega football tournament broke all official viewership records of India, when it comes to football, in the first two days of the tournament.

Of the total, 4.1 crore people, caught the action on the TV channels SONY TEN2, SONY TEN3, and SONY ESPN and the rest of the 60 lakh people viewers logged into the SonyLIV website to watch the matches live.

According to data released by BARC, the opening ceremony of the FIFA World Cup had 21 lakh impressions and in the first week of the tournament, football alone accounted for around 66 percent of all sports viewership. Considering cricket matches involving teams like Australia, Afghanistan, India were also going on, the numbers are nothing short of impressive.

Interestingly, Kerala, Assam and the other Northeast states and West Bengal are the top contributing markets in terms of viewership for the FIFA World Cup. Nearly 30 percent of the total viewership came from Kerala, while 28 percent and 20 percent, respectively came from the Northeast (mainly Assam) and West Bengal.

Not just the TV Viewership but the sales of team jerseys are also soaring high, as well as, footballs and other soccer gears are seeing strong growth on various e-commerce platforms in India over the last two weeks with Argentina, Germany and Brazil emerging as the top favourites. And it is no surprise that the customers are more inclined on getting their hands on jerseys of football heroes like Cristiano Ronaldo, Lionel Messi and Neymar Jr.

"We have witnessed a sharp spike in football-related products which includes footballs, jerseys, shorts and tracks. The football world cup is a big revenue driver for the Sports Business with Football contribution to business increasing by 40 percent over April-June," Myntra VP and Head (Sports, Footwear and Accessories) Puspen Maity told Press Trust of India.

According to Snapdeal, there has been a huge jump in demand for football-related merchandise on their platform from cities and regions like Delhi-NCR, Mumbai, Goa, Chennai, Kolkata and the North-eastern markets. From all these things, one thing is very evident, the football market in India is at all time high and from this point onward it will only get bigger! 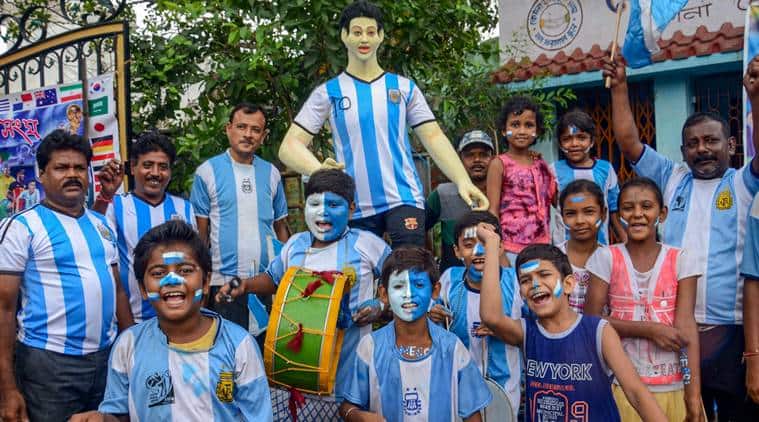