Reuter was one of the few players who won the FIFA World Cup and UEFA Euros with two different countries.

If you start your Youth Career at the age of 5, chances are, you would have a career as good as Stefan Reuter. He started really young, joining TSV 1860 Dinkelsbuhl. In his formative years, he played mostly as a right sided defender, trying out as a right sided midfielder as well. IN 1982, at the age of just 16, 1. FC Nurnberg gave him his big break in the 2. Bundesliga. Reuter became a consistent starter since then, and when Nurnberg climbed the ladder of promotion to play in the Bundesliga, Reuter was one of the first names on their teamsheet.

Reuter’s debut season in Bundesliga came on the back of an impressive UEFA Under-16 Euros victory for Germany. Reuter played for West Germany at the International level before the integration. Reuter played at Nurnberg for 4 years, making 125 League appearances out of a possible 136, which talks volumes about his consistency and fitness. Being a right sided defender and scoring 13 goals was an exceptional feat. Reuter liked to chip in with goals, as he joined in with the attackers occasionally.

Nurnberg gave Reuter his big break, and he never looked back from there on

In 1987, while still at Nurnberg, Reuter got his big break in the West Germany International side, making his debut. He became a regular feature of the West German squad since then, and in 1988, Bayern Munich came calling for his services. Stefan was an instant hit at Bayern, making the right-back position his own. He had a successful debut season with Bayern,winning his first ever Bundesliga with the Bavarians. His second season at the club saw him win the DFL SuperCup as well as defend the Bundesliga crown successfully. Reuter had to wait till the age of 23 to win his first Bundesliga title, but after he did win it, he immediately won it again.

In 1990, Reuter received the call up for the West Germany squad which went on to win the FIFA World Cup. West Germany kept a clean sheet in the finals, winning it 1-0 against Argentina. It was a repeat of last World Cup’s final, and this time, West Germany did win, thus avenging the 3-2 defeat dished out to them in the previous World Cup finals. This was the last major tournament which had divided Germany’s participation as their political differences were brushed aside to form one United Germany.

Reuter had a quiet season after winning the World Cup, as Bayern failed to win the Bundesliga title again, faltering in European and Cup competitions as well. In 1990, Liverpool had made a fairly public approach to seal his signature, but Reuter followed most of his compatriots into the best league of that time, the Serie A. He joined Juventus in 1991 from Bayern Munich, starting off on a new adventure.

But soon his adventure turned into a game of heart breaks as he first lost out on the Serie A title, coming in second. He then lost the Coppa Italia finals as well. Reuter made 28 starts in the league, but was feeling homesick. So when Borussia Dortmund, Bayern’s biggest rival, came calling for his services after just one season in Italy, he jumped on the opportunity to go back to his home country again.

But before the impending move, Reuter was met with more heart break. The German side, who were playing in their first UEFA Euros since the reunion, reached all the way to the finals of the tournament, after somehow managing to climb out of their group, despite earning just three point sin three games. They defeated the hosts Sweden in the semifinals 3-2. In the finals, Denmark, who had barely qualified for the tournament, as Yugoslavia's political disturbance had led to its disqualification, leading to Denmark’s qualification, played out of their skin to beat the overwhelming favourites 2-0, with goals from Jenson and Vilfort securing their fate.

Reuter, who was nicknamed “Turbo” for his speed and short distance acceleration, had a almost successful first campaign with Dortmund, reaching the UEFA Cup finals. It was ironic that he lost the title to his previous club, Juventus, in a 6-1 thrashing over two legs, a record scoreline. It took them some time to recover from the bashing, but in 1994, Dortmund, who had a huge influx of cash due to their participation in the UEFA Cup, won the Bundesliga and successfully defended the league title in the following season.

The back-to-back league success was coupled with back-to-back DFL SuperCup wins, over Borussia Monchengladbach first in 1995, and then against 1. FC Kaiserslautern. But the biggest coup was yet to come. Reuter started each and every match of a successful campaign under the captaincy of Mathias Sammer, colliding with Juventus in the finals of the UEFA Champions League. The holders, who were firm favourites, having won it all i the previous season. But it was Dortmund who took the lead, with Karl Heinze-Riedle putting them ahead. Riedle scored again from a corner, making it 2-0 on the night. When Alessandro Del Piero pulled one back for the Italians, the match was set up beautifully for a tensed finish. But one 20 years old Lars Ricken, who had come on the field not 16 seconds ago, was sent through by a beautiful Andreas Moller through ball, decided to chip the goalkeeper from 20 yards out. When the ball nested safely into the back of the net, the Olympiastadion, the home of Bayern Munich and the venue for the finals, erupted with vociferous Dortmund fans. 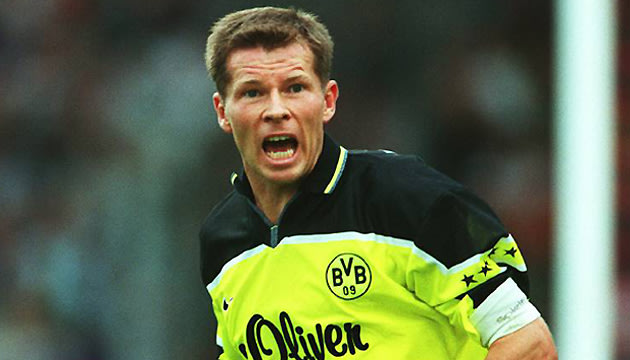 Reuter would win the Champions league with Dortmund, adding gloss to his well stocked trophy cabinet

The scoreline didn’t change after that insane goal, as Dortmund ended the night on 3-1, winning the UEFA Champions League. Dortmund went on to win the Intercontinental Cup as well, in 1997. It marked the end of a cycle of trophies won. Reuter had now won 4 Bundesliga titles and 3 DFL SuperCups, to add onto the recent European and World success.

It took a long time to replicate the successes and bring trophies to Dortmund, but in 2001-02, Dortmund went on a similar run like the one under the captaincy of Mathias Sammer. This time though, he was the coach of a Borussia Dortmund side, that was dealt with major heartbreak. Having reached the UEFA Cup finals on the back of some impressive wins, Dortmund lost out to Dutch heavyweights Feyenoord. Reuter, who was 36 now, was running the final few laps of his career. Reuter had been dealt with a lot of heartbreaks, but a second UEFA Cup heartbreak, being the overwhelming favourites, was hard to digest.

The Bundesliga title celebration was the silver lining of a season which felt like it was full of almost. With Bayer Leverkusen leading the Bundesliga comfortably, Dortmund went on a terrifying run of victories, coupled with untimely string of poor losses of Bayer. Bayer were leading the pack by 5 points with 3 games left, but somewhat managed to lose against a relegation threatened 1 FC Nurnberg, In the end, Dortmund pipped Bayer to the trophy by just a single point, as Reuter finally saw some strong fortunes in his favour, for a change.

Reuter had hung up his boots from International football in 1998, and in 2004, at the age of 38, he decided to call it quits on his illustrious club career as well. Reuter was still a starter and a regular fixture in the Dortmund lineup, sometimes as a midfielder playing on the right, and sometimes as a right back. But he had started losing his speed, as he was not the “Turbo” he used to be once.

Overall, 5 Bundesliga titles, 3 DFL SuperCups, 1 Champions League, 1 World Cup and 1 UEFA Euros crown, Reuter played in all and won it all. He was a solid right back, who ably doubled up as a right midfielder whenever his club required him to be. A loyal servant of the club he played for, he is one of very few players who made the switch from Bayern Munich to Borussia Dortmund via Juventus, with most doing the other way switch. With 500+ Bundesliga appearances, he is also a legend of the German football, and by now managing Stuttgart, he is still serving the German football.