Leonardo Bonucci had a brain freeze, blaming his team-mate Moise Kean for being racially abused by the Cagliari fans. In the second half of Juventus’ away game against Cagliari, the fans in the Curva made loud and audible monkey chants whenever Moise Kean touched the ball.

In the 85th minute, when Moise Kean scored the second goal for Juventus, he went to the Curva and in an emotional display of strength, just opened his arms and told the Curva with his body language “What are you going to do about it now, eh?”

The chants did not die down though, with the game finishing with a minority group of supporters continuing to attack Juventus racially as it was the only way they could make themselves be heard, with Juventus clearing Cagliari up on the pitch.

But the biggest shock of the night came at the end of the game, when Leonardo bonucci, former captain of AC Milan, came out and blamed Moise Kean for the racial abuse pelted at him and Blaise Matuidi!

Here are his full comments after the game:

“Kean knows that when he scores a goal, he has to focus on celebrating with his team-mates. He knows he could’ve done something differently too. There were racist jeers after the goal, Blaise heard it and was angered.

I think the blame is 50-50, because Moise shouldn’t have done that and the Curva should not have reacted that way. We are professionals, we have to set the example and not provoke anyone. I prefer to talk about the great performance. We were aggressive on the wings, as we knew they could cause" problems with crosses.”

Juventus fans, rightfully so, turned on the Juve defender on Social media, branding the defender ‘pathetic’ and ‘an idiot’. Cagliari president Tommaso Giulini added more fuel to fire, disrespecting Blaise Matuidi and also attacking the midfielder. Here are his comments after the game:

I don’t want people to start being self-righteous about it, because I heard that already, whereas Juventus players came to me afterwards and confessed Kean was wrong to celebrate that way.”

Juventus head coach Massimiliano Allegri took the safer route, taking a more pragmatic approach when questioned about the racist chants. Here are his comments after the game:

“I didn’t hear anything from the stands, as I was focused on the game. You need great intelligence to deal with these situations and should not go to provoke people. That, of course, does not mean the idiots in the crowd and the way they reacted should be justified.

As always in life, there are idiots who do stupid things and ruin it for everyone else. I don’t think talking about it all the time helps. I don’t think halting play helps, because not everyone in the stadium did that.

We need to use the cameras, find those who are doing it and punish them. It’s very simple, identify them and not one-year ban or two, just give them a lifetime ban. We’ve got the technology, it can be done if the authorities want to. The problem is, they don’t really want to.” 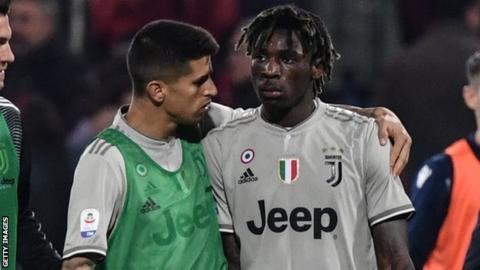 As always, the Italian game is marred by yet another racial controversy, but what should be even more alarming is when your own team-mate blame you for your African descent and use it as an excuse to defend the racist idiots who bring shame to the beautiful game of football.

Have your say on the Bonucci idiocy by sharing your thoughts with us. Write to contact@indifoot.com or find us on Instagram, TwitterandFacebook.