Super Cup 2019: Chennaiyin knock Mumbai to progress to round of 16.

Bhubhaneshwar: Chennaiyin FC defeated Mumbai City FC by 2-0 to qualify to the round of 16 of the Hero Super Cup 2019 here at the Kalinga Stadium on Friday. CK Vineeth and Jeje Lalpekhlua registered their names on the scoresheet for the Chennai-based outfit.

It was a cagey start for both the sides as the teams tried to battle it out in the midfield but created scarce chances in the final third. Raynier Fernandes of Mumbai and Isaac Vanmalsawma of Chennaiyin created problems for the opponent teams with their pace and trickery.

However, the first real chance of the game fell to Jeje Lalpekhlua. He managed to pick up a ball on the edge of the box to which Lucian Goian stood to defend. The Mizo created a space for himself to place a left-footed shot which went wide of the far post.

A few minutes later, Isaac almost managed to give the men in blue a lead from the set piece as his freekick seemed destined to go into the back of the net but Ravi Kumar managed to put a hand to it. The Islanders were toothless in the attack as they tried a few long range efforts.

When it seemed that the match would be goalless at the stroke of halftime, CK Vineeth opened the account for Chennaiyin with a shot placed into the top left corner from just outside the box. Almost instantly, just a minute later, Jeje doubled the lead for the Machans. He managed to get hold of a well-placed cross from Thoi Singh and put it neatly into the back of the net. 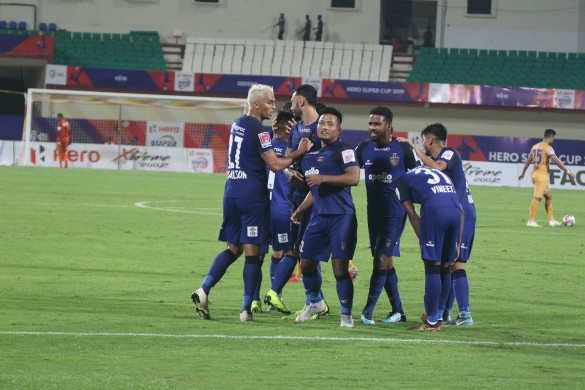 The picture did not change much in the second half. Brimming with confidence, Chennaiyin came out with all guns blazing and tried to continue their attack. Vineeth troubled Ravi Kumar with an effort from 25 yards out.

Lucian Goian had the only chance to register a goal for the Islanders as his long range effort nearly fell in the target zone but the Chennaiyin defence stood tall and resolute to make it to next round.