“There's no advantage before the game” - Jurgen Klopp

Jurgen Klopp is back in the finals of a major European Cup this season. He has been in a final every year since 2012, barring the 2017 season. And he is vying to win his first ever European Cup, facing Tottenham Hotspurs in the biggest game of the season. Ahead of this season-ender, Jurgen Klopp faced the music from the press and here are the excerpts from his press conference:

Is your preparation for the finals similar to that of last year? Has anything changed?

Pochettino claimed that is is not fair to judge the success of a manager by the trophies won. What are your thoughts on this?

“If I said that then it's fair play!

Look, I don't care. I think he's right but that's not important. The thing is, you – the outside world – it is your right to judge us by what we win and what we don't win. Look back in 20 years and nobody will talk about our brilliant season unless another team comes close to 97 points, or has more or less, then yes we maybe are mentioned again, but nobody will really speak about that.

But for me, as a person, it will stay forever. I will probably have 20 or 30 years career as a manager and then it is easy to remember it. I can really respect that and that is probably what Poch is like as well. But the outside world is like this and we have to accept that.

You did exceptionally well in Europe and in Germany with Borussia Dortmund as well. How do you compare that side with the current Liverpool team?

“I had wonderful teams as you know, but since i came to England it was the best team I had here, all the boys together. Borussia Dortmund were a brilliant, brilliant team, even younger than the side here, but it was not that mature. We won the league and so that sounds little a bit strange, but this team showed all the maturity you need for being a big team over the season.

It is just a description. It doesn’t lead to anything. It just gives me a good feeling.”

Do you think Real Madrid last year had more quality than your side?

“Not potential but quality, and experienced like hell having won it three times in a row and so for them it was very simple to deal with all the circumstances around the game. It is 20 minutes after you leave the pitch before you can enter it again, all the party is going on around and you are sitting in the dressing room. It is a lot of time to think.

That was a different level. This time the level is much more equal. That is how it is. That is why we feel different but we don’t feel halfway through.”

Are Liverpool favorites going into the UCL Finals?

“In England, I think people know how tight the game will be because it is Tottenham and us. We won twice 2-1 and we were really good in both games and I think we deserved to win but the second game at home, especially, we were lucky as well.

In Germany, they only look at the table and see that we had 26 more points than them and so we are clear favourites. It is different.” 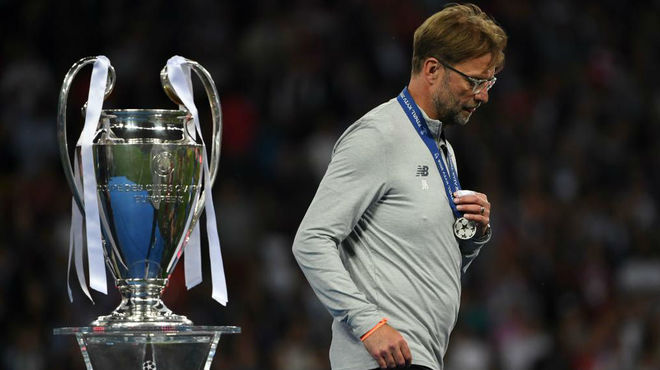 You have done extremely well in European competitions but are yet to win a major European trophy. Do you think you’re unlucky in the finals?

"If I would be the reason for losing six finals in a row, then everybody needs to worry really. So if that's not the case then we always have to have a chance and that's how we see it actually.

Since 2012, apart from 2017, I was with my team every year in the final. So we came there sometimes with luck in some moments, but most of the time because we had to go there, so I am probably in the moment world-record holder in the last seven years at least in winning semi-finals.

I'm a normal human being, so if I would sit in the room and think it's all about me, I'm the reason, if I would see myself as a 'loser' or whatever, then we all would have a problem, but I don't see it like this. I think there can be moments that are lucky and unlucky and in the few finals I was part of we were never on the lucky side, it's true, but I cannot change that.”

Do you think Liverpool are favorites to win the UCL or are Tottenham favourites?

“If I thought Tottenham had an advantage I would be mad. I know people say we are the favourites because we have more points in the league. But if you saw our games against Tottenham this season, it was only 2-1. There's no advantage before the game.”

Do you think Liverpool will win the UCL finals this time around or will they face yet another heart-break at the hands of Mauricio Pochettino? Write to us at contact@indifoot.com or reach out to us on instagram, facebook and twitter.