When your managers call you “my colossus” and “The professor of defense”, there has to be something that you’re doing right. Well, in a world i which money defined loyalty, Tony Adams proved that there still remain people who play for their heart and passion and show the loyalty like a soldier. Some might mistake it as a pure outburst of emotions, but don’t be shocked if he meant every single word when he said 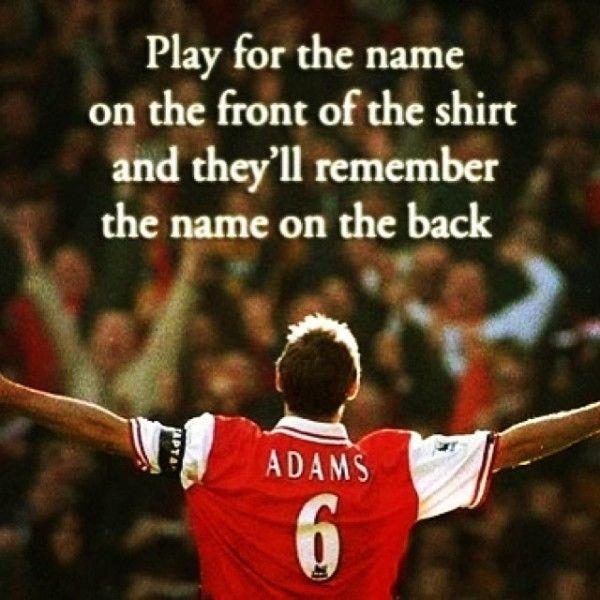 Tony Adams makes his feelings for the club public.

Adams trialled for Arsenal and ultimately signed in 1980 at a young age of 14. After coming through the ranks, in 1983, Adams was given a chance to showcase his talent in the first team, at home to Sunderland. But an error from Adams resulted in a 2-1 home defeat. This resulted in him immediately being made the scapegoat and falling down the pecking order. It took a couple of seasons of being a fringe player and playing for the reserve team for Adams to show his talent as he kept knocking on the first team’s door.

Adams finally got his second chance and he never looked back. It was the 1986/87 season, and Adams had become an undisputed starter. He capped the season off by winning his first title as an Arsenal player, defeating Liverpool in Wembley to lift the Football League Cup. Under George Graham, Adams formed a formidable partnership with Steve Bould, Lee Dixon and Nigel Winterburn, which was one of the most feared backline in England.

In 1988 came the biggest moment of Adams young career. At the age of 21, Tony Adams became the captain of Arsenal. He became the youngest player to be handed the Captain’s armband in the history of the club. When questioned about the decision, George Graham said:

“I made Tony Adams one of the youngest captains in Arsenal’s history and I never had any doubts about him doing the job. The modern game is short of dominant personalities, so Tony stands out like a beacon.”

Tony’s strong performance for Arsenal didn’t go unnoticed as he was selected for the Euro 1988 qualifiers team in 1987, making his International debut in that year. He also participated in the Euro 1988, scoring once for England.

Tony Adams played like a resilient warrior. He was strong and tall, but he was also blessed with an unmatchable sense of reading the game. He was known for his immaculate timings on his tackles and for his ball carrying skills. He was an old school defender who would not hesitate to put his body on the line and take one for his team and players. He was an inspiration for young players and a leading light depicting everything that was good about Arsenal.

His first season as a captain ended with him leading Arsenal to the First Division title of 1988/89, famously winning at Anfield in the last game of the season, clutching the title out of the grasp of Liverpool in the dying minutes of the game. Two years later, Arsenal again won the Title, losing just one match throughout the season and conceding only 18 goals. To put that into perspective, Liverpool, with the second best defensive record, conceded more than twice the number of goals conceded by Arsenal (40 in total).

The number 6 shirt will forever be associated with the legend, Tony Adams.

1990 was also the year when Tony’s addiction would culminate into a very big public issue. Since he has hit 18, Tony had a problem with alcohol. he never seemed in control once he started drinking. This resulted in many brawls in night clubs. But in 1990, things went overboard. Adams, under the influence of copious amounts of alcohol, smashed his car. His blood alcohol level was way above the safe level as he ended up spending a couple of MONTHS in prison.

Arsenal loyalists thought that this was the end of the alcohol fiasco and the beginning of a new chapter in the life of Tony Adams, but things kept going downhill. Tony confessed that he played a match when he was completely under the influence of alcohol. He even hit his head falling from the stairs, leading to 29 stitches in his head. Another public incident included Adams going on a drinking spree for allegedly coping with England’s semi-finals exit from the Euros 1996.

1990 will also be remembered for the controversial decision made by Booby Robson to omit Tony Adams from the World Cup squad. After the omission, Tony missed another International tournament, missing the Euros 1992 due to injury, although he was a regular starter during the qualifiers. Just before the 1996 Euros though, Tony Adams was given the Captain’s armband for his country as he led the side to the semi-finals of the Euros. What followed after the Euros was well publicised in the media at that time.

Finally in September of 1996, Adams publicly acknowledged his struggles with alcohol and said “I was no longer concerned about the feelings of other human beings, there was no pleasure in anything.” Adams vowed to improve his situation and seek help. 1996 was also the year when a certain Arsene Wenger was appointed the club manager. Arsene revamped the off field structure at the club, bringing in alcohol bans and restrictions and completely altering and managing the diet of the players.

There was, though, one more publicly scrutinised event which took place before the World Cup. Glenn Hoddle on being appointed the England Manager, decided that Alan Shearer would make for a better captain and hence he took the Captain’s armband off Tony and gave it to Alan. Speaking about it after hanging up his boots, Tony said “I have some resentment over the way Glenn Hoddle gave the captaincy to Alan Shearer instead of me but I can let that go. I reacted positively. I disagreed with him and he thought Alan could get more penalties being a centre forward. People know my reaction to that.”

Contrary to Hoddle, Wenger showed his faith in Adams and was very reluctant to take the captains armband away from him. He stood by him as well as aided him in his battle against alcohol. Adams recovered well and captained Arsenal to the Premiership and FA Cup double twice, in 1998 and 2002. The last match of the 1997-98 season perhaps was an indication of the fruit that the hard work of Adams and Wenger had bore. Stevie Bould put his defensive partner Adams through on goal, and as he shot past the goalkeeper into the bottom corner, celebrations truly began in the stands as Arsenal lifted the Premiership title.

Tony Adams under Arsene Wenger was a reformed man who played out his career outside the intense eyes of public scrutiny and retired at the end of the 2001-02 season at the age of 36. Yes, the off field reforms had extended the career of Tony to the age of 36, which would have been termed a joke if it would have been claimed in the pre-wenger era. Tony captained Arsenal for 14 years and had the unique achievement of winning the Premiership title as a captain at least once in three different decades.

May 2002 saw the dreaded back 4 of Lee Dixon, Steve bould, Tony Adams and Nigel Winterburn reunite for one final time as Arsenal took on Celtic in an exhibition match to honour both Tony Adams and Lee Dixon.

Ironically, Adams was like a bottle of wine, the older it got, the more impressive it became. This was epitomised by the fact that the fans voted Tony Adams as the player Arsenal missed the most in 2003. Adams was also inducted into the English football’s Hall of fame in 2004 and was recognised as the third greatest Gunner of all time, alongside Thierry henry and Dennis Bergkamp and was forever immortalised with a Bronze statue outside the new home of the Arsenal, the Emirates stadium.

Perhaps the greatest defender to ever grace Arsenal’s shirt, the following snippets properly define his love for the club and its fans:

“I love Arsenal and I wish I could work for them. You know how you feel when one of your mates who writes a blog gets a post up on the dot com? Yeah, that’s me. I’m chuffed at anything the club invites me to do and really just want to be connected at some level, any level.”

“Those that say it is the taking part and not the winning that is important are, for me, wrong. It is the other way round.”

“...But it’s my football club, Arsenal Football Club, and when I get an opportunity and if I’m needed and if I’m ready then I’d love to be of service. When I’m needed, when I’m wanted. I’ll make the tea there!”

And the best among them all: