Mo Salah joined Liverpool from AS Roma in the Summer of 2017 on the back of a solid season. He had scored 19 goals and assisted 15 more for a Roma team who were known more for their solid defence and steely midfield. But Salah’s speed and close control had not un-noticed, with Liverpool snapping him up for £36.9M.

In a transfer window where Neymar was bought for €222M and a 20 year old Ousmane Dembélé was sold for €110M + €40M add-ons, the money spent on Salah as well as his transfer went unnoticed. But once he started playing for Liverpool, boy did he make his presence felt.Salah became a regular on the scoresheet right from the off, scoring against Watford, Hoffenheim, Arsenal and Sevilla. His goal scoring form made him a permanent fixture on the team sheet as well.

The attacking trio of Mane, Firmino and Salah were working brilliantly in tandem, with Liverpool becoming a free-scoring side. Firmino and Salah especially were too fast to handle. Their movement and interchangeability was very hard to pick up by the opposition defenders. The following exchange between Firmino and Salah shows just how good Salah is at sucking defenders out of their rigid shape because of his movement.

With the shape of the backline broken, Firmino now makes a clever little dart away from the goal to receive a pass from Salah, who runs into the space vacated by the two centre backs going through on goal in the process. Notice the cute little back-flick by Firmino to send Salah in the clear. It is this insane pass which makes sure Liverpool do not afford the opposition defence even a microsecond to get back into their shape. If Firmino would have taken one more touch, Bertrand would have closed Salah down, and the chance would be dead.

It is this understanding between the front 3 that has helped Salah become one of the most prolific goalscorer Liverpool and the Premier League has ever seen. But this is not the only way in which Salah has scored goals. One of the biggest advantages of playing Firmino centrally is his ability to interchange the role of a out an out striker and a False 9. Whenever Firmino decides to play as a False 9, the defender have to push up the field to cope with his movements. This leaves them prone to simple links over their defence, with the terrifying pace of Mane and Salah matched by no defender in the PL.

This is a simple example of how Firmino and Mane have sucked the defender to the far side, leaving Salah, who is always at the edge of the opposition’s defense line, just one dink away from a blistering run through on goal. This has been the story of many of his goals this season, with his pace and ability to create space to shift the ball onto his favoured left foot on full display. With no defensive shackles put by Klopp on Salah, he has the license to stay high up the pitch, lurking around the high line of their opposition, ready to pounce on a dink over the top or a through ball.

Another feature of his play is decoy runs. As the season wore on, the defenders started to understand the technique used by the front 3. They decided to gang up and close space down by going 2-on-1 or 3-on-1 to ensure that either one of Mane, Salah and Firmino did not have the freedom of space. A simple and clever solution to this problem? Decoy runs.

Liverpool on the counter-attack are one of the toughest team to defend against, not because they counter in numbers, but because the number who do counter, make several mazy decoy runs to drag defenders and make space for others to exploit. A simple illustration is shown in the images below: 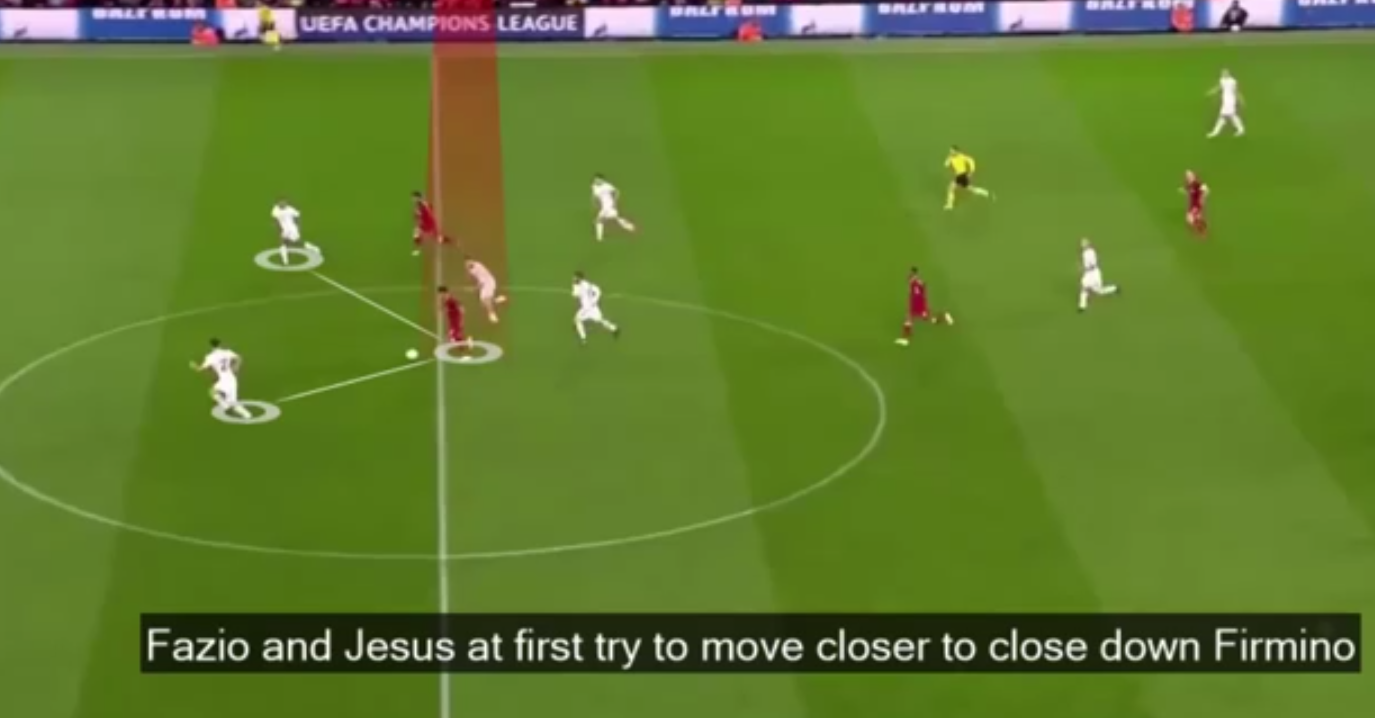 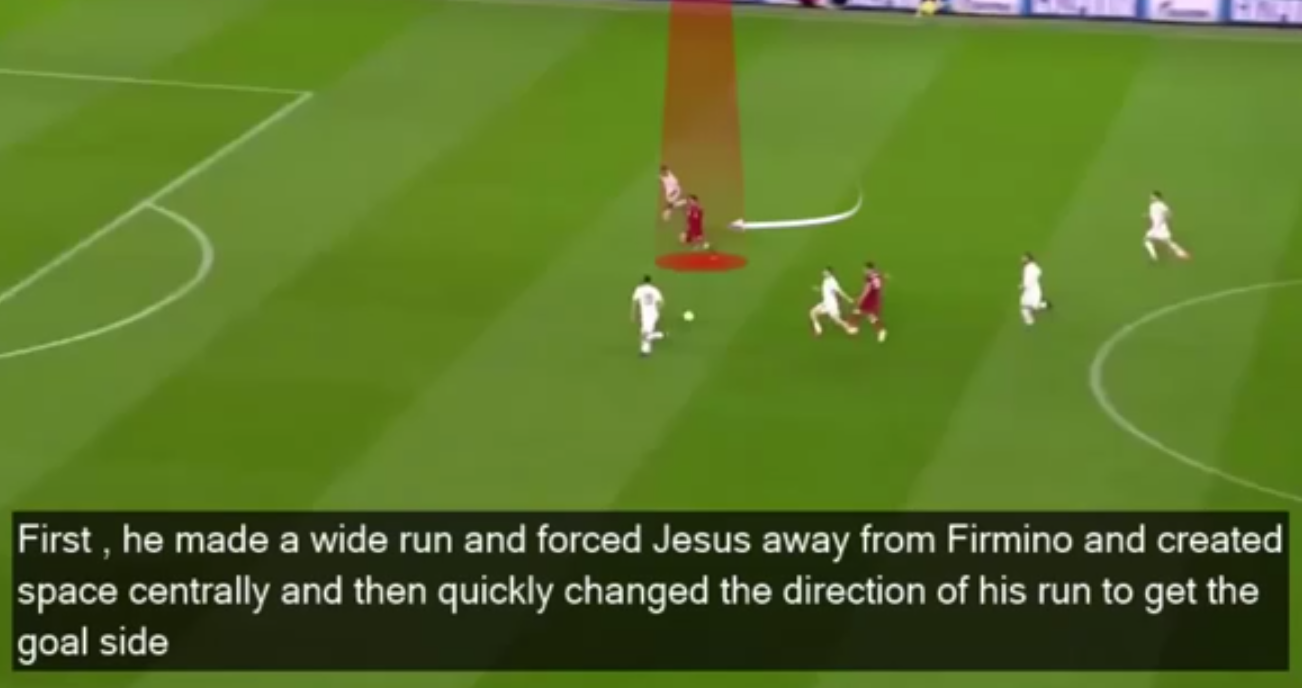 The decoy runs were cleverly disguised and his pace and low Centre of Gravity ensured that he could change directions effortlessly while the backtracking defender was caught off guard by his decoy runs. The clever counter-attack ended in a goal, obviously, with Salah dinking it over the on-rushing Allison. While his play has been clever, he has backed it up all season with a wide array of finishing and creativity. His goals and assist against AS Roma in the first leg were probably his best all season, as he put on display all his tricks in one go.

While some might argue that Firmino has been integral to Salah’s success this season, there is an equal shout for Salah being the reason behind Firmino’s deadly and clever play. Not only has Salah scored an insane 45 goals in 53 game this season, he has also assisted 13 goals, almost matching up with his tally for assists at Roma last season. Salah has been a force to reckon with, sweeping records aside and making Suarez look like an average striker with his goalscoring exploits.

With the Champions League final and the last Premier League game yet to come, a 50 goal season cannot be ruled out. And if Liverpool manage to oust Real Madrid, then Salah will surely be the front runner to win the Balloon D’Or and end the Messi Ronaldo duopoly, one which was expected to be ended by Neymar.

PS:A big shoutout to Nouman, whose tactical insights were crucial to the creation of this article.