Who was the greatest maestro in Madrid’s history?

The greatest match of the la Liga season, the El Clasico, is the match which makes or breaks careers. It has proven time and again as the match which could make you a national superstar, or lead to your sacking. Raul created a historic moment during one such fiercely contested El Clasico. Racing through on goal, the Madrid forward had the audacity to dink the ball over the on-rushing keeper and wheeled away in celebration.

It was the iconic celebration which has motivated generations of Madridistas to go that one step extra and strive for that goal, the kind of which would warrant such a celebration. Have a look.

Raul was a prolific scorer, who had won it all and was one of the greatest La Masia graduates to wear the Madrid jersey. He is fondly remembered for the brilliant dribble which helped Real Madrid seal the Champions League trophy against an impressive Valencia side in the 1999-2000 finals.

Fernando Hierro, another Madrid legend, nicknamed Raul as El Ferrari for his elegance on the ball, technical skills, and speed. For a long time, Raul was the highest goalscorer in the history of Champions League, a record which was shattered by none other than his successor, Cristiano Ronaldo.

There are a lot of symbolic memories of Raul. The main reason why Raul is remembered so fondly is that of his knack to score important goals. His technique to dink or chip the ball over an on-rushing goalkeeper or even a static goalkeeper has been used by coaches across the world to teach youngsters the art of out-foxing the goalkeepers.

His brace against Manchester United at the Theatre of Dreams, Old Trafford, in the 1999-2000 Champions League campaign cemented his status as the hottest forward in Europe at that point. Raul’s first ever goal came at home against arch-rivals Atletico Madrid. It is safe to say that he became the twinkle in the eye of every Madrid supporter since that day.

Raul was also probably one of the few players to be directly promoted from the Real Madrid C team to the first team. He was one of those players who scored goals in heaps and had an impressive 10 seasons in which he scored 20+ goals. Barring the insane exploits of Cristiano Ronaldo, that is an impressive tally even for a forward.

Raul could score from his left foot, right foot and his head with scary accuracy and beautiful grace. He was one of those players who was so pleasing to the eye and had an aura around him that would bring the Bernebau faithful to their feet everytime he dribbled with the ball. Raul was one of the few players who had the honour of earning a contract for life at Real Madrid, although he would ultimately move on to play for a further 5 years after leaving Madrid. 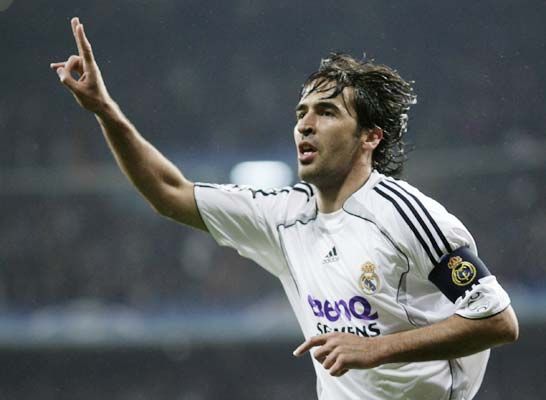 The impact of Raul was also felt by Schalke 04, for whom he scored 40 goals in 2 seasons at the age of 33-34. In his honour, Schalke decided not to give the No. 7 jersey to any player for the season following his departure. He was a genuinely lovable character, who gave his all on the field, and the fans always backed him for this. The greatest, the graceful El Capitan.