If Xabi Alonso would have been born 10 years before or later than the original both year of 1981, he would have been hailed as one of the greatest midfielders of his generation. But with Xavi and Iniesta dominating La Liga and the Spanish side, the stocky magician, was always overshadowed and not celebrated as much as the former midfielders.

If you’re a winger or a Striker ahead of Alonso, you can be sure of one thing, your runs will be noticed and picked out by pin-point balls over the top of opposition defenses. And if you lost the ball in the middle of the park, Xabi Alonso would be onto the opposition player in a flash. He would not shy away from committing the occasional fouls to thwart counter-attacks. But he was so good at positioning himself, that he rarely had to.

Alonso has only received praise for his insane range of passing wherever he has played. The Spanish coach, Inaki Saez, who gave Alonso his National debut, said:

“He has a fantastic range of accurate passing [and] sees football with an extraordinary clarity.” Alonso will forever be a Kop faithful

Alonso played some of the best football of his career at Anfield. He was an ever-present in a Liverpool side which reached two Champions League finals while he was at the club. Alonso also scored famously in the Miracle of Istanbul Champions league finals against AC Milan.

Gerrard was devastated by the departure of Xabi Alonso to Real Madrid and said that Liverpool was losing a sense of security at the back and their quick transition play due to the departure of Alonso.Between 2005-2014, Alonso played 40+ matches an astonishing 9 times. He was praised for his fitness and longevity in the match by many managers, as he was rarely substituted off in matches.

Alonso was a creative midfield who had a strong defensive game as well. He was the perfect deep-lying midfielder, with his excellent vision, good technique and varied passing range beautifully complementing his solid tackling skills and smart positioning on the pitch. He was an effective set-piece and penalty taker, and was renowned for his long-range shooting, with a 70 yards screamer against Newcastle United a prime example of his abilities.

After moving to FC Bayern Munich, everyone thought that he would become a fringe player, playing regularly in the domestic cups and occasionally in the league. But players like Javi Martinez, Mario Gotze and Renato Sanches finding it extremely difficult to break into the first XI ahead of Alonso. Alonso was 36 by the time he finished his last season as a professional footballer, yet he played 38 times for FC Bayern Munich, including 27 times out of 34 in the league.

Alonso had won the Champions League twice, the National League 4 times as well as 8 Cup tournaments. Alonso had also won the UEFA Euros twice and the FIFA World Cup with Spain, turning out for Spanish National team 114 times throughout his career.

Alonso is surely one of the best midfielders to ever grace the pitch and has to go down as the best Spanish midfielder ever, ahead of Xavi and Iniesta purely because of how much he contributed defensively. He could pass like Xavi, shoot like Iniesta and still track back and be the last line of defense. In my opinion, he was the greatest product of the Real Sociedad academy and the greatest player in a generation of great players. 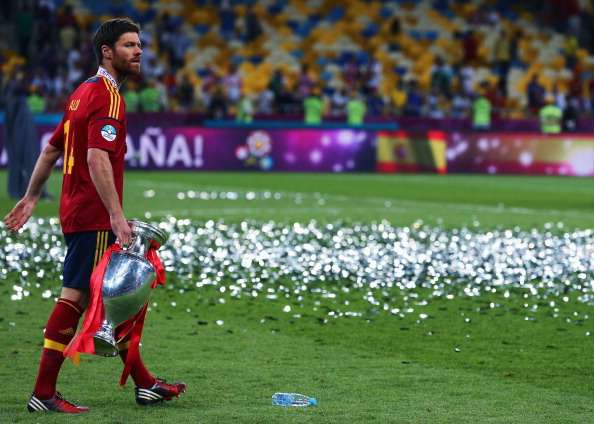